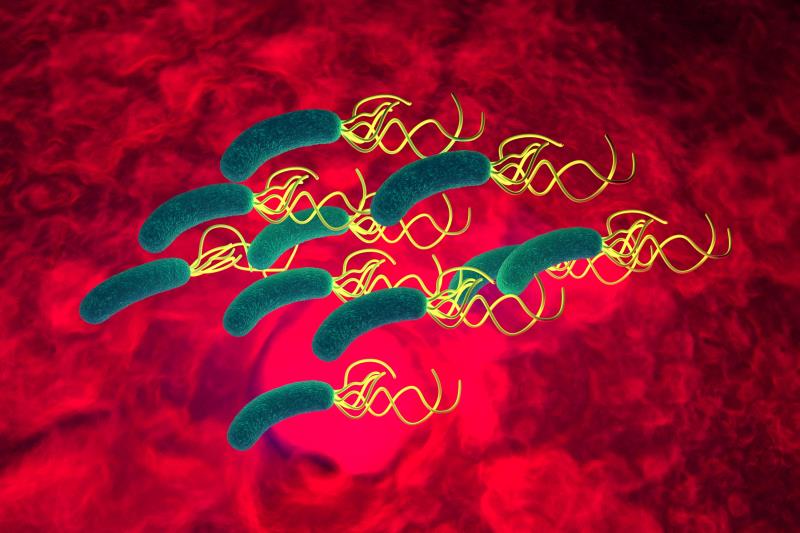 “Nearly one-third of US and European patients are not successfully treated by empiric lansoprazole triple therapy,” he noted.

In the pivotal, multicentre, phase III pHalcon-HP trial, 1,046 adult patients (mean age ~51 years) with H. pylori infection — as indicated by a positive 13C-urea breath test — were randomized 1:1:1 to treatment with PPI-based triple therapy (comprising lansoprazole, amoxicillin, and clarithromycin), vonoprazan triple therapy (with amoxicillin and clarithromycin), or vonoprazan dual therapy (with amoxicillin) for 14 days. Eligible participants have at least one of the following: dyspepsia, history of peptic ulcer, recent/new diagnosis of nonbleeding peptic ulcer, or long-term use of NSAID at stable dose.

The participants were stratified based on resistance status at baseline. For the primary analysis, participants comprised those without strains resistant to clarithromycin or amoxicillin. Secondary endpoints were assessed in all patients as well as in subgroup with clarithromycin-resistant strains. [ACG 2021, abstract 11]

Four weeks after treatment, eradication rates were significantly higher in both the vonoprazan triple- and dual-therapy arms compared with the lansoprazole arm (84.7 percent and 78.5 percent vs 78.8 percent; p<0.0001 and p=0.0037 for each comparison) — thus meeting the primary endpoint of noninferiority to lansoprazole triple therapy in patients with non-resistant strains.

Not only were vonoprazan-containing regimens noninferior to, they were also superior to lansoprazole triple therapy in a prespecified exploratory analysis on the intention-to-treat population (p=0.0408) and the per-protocol population (p=0.0059) among patients with non-resistant strains.

In the overall patient population, both the vonoprazan triple- and dual-therapy regimens were superior to lansoprazole triple therapy (80.8 percent and 77.2 percent vs 68.5 percent; p=0.0001 and p=0.0063, respectively).

When restricting the analysis to patients with clarithromycin-resistant strains, similar results were also seen, with superiority of both the vonoprazan regimens over lansoprazole triple therapy (65.8 percent and 69.6 percent vs 31.9 percent; p<0.0001 for both comparisons). This finding, according to experts, was particularly relevant given the high prevalence of clarithromycin-resistant H. pylori infections seen in practice.

“All study regimens were generally well tolerated,” Chey reported. The rates of treatment-emergent adverse events (TEAEs) were similar across the three treatment arms, at 34.1 percent, 29.9 percent, and 34.5 percent in the vonoprazan triple-, dual-therapy, and lansoprazole arms, respectively. Discontinuation due to TEAEs occurred in 2.3 percent, 0.9 percent, and 1.2 percent of patients, respectively.