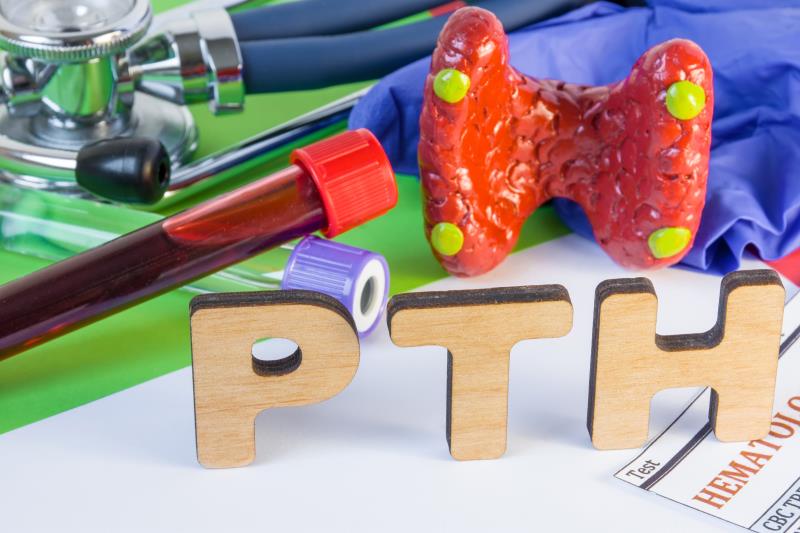 The administration of upacicalcet – a novel, small-molecule calcimimetic agent in late-stage development in Japan – led to a significant reduction in serum intact parathyroid hormone (iPTH) level without increasing upper gastrointestinal (GI) symptoms in patients who have secondary hyperparathyroidism following haemodialysis, according to a phase III trial presented at ASN Kidney Week 2020.

A total of 154 participants (mean age 64 years, 76 percent male) who were receiving haemodialysis (primarily for chronic glomerulonephritis and diabetic nephropathy) TIW were screened for a period of 2–4 weeks. Previous calcimimetics used were washed out (≥8 weeks for etelcalcetide and ≥2 weeks for cinacalcet) prior to screening. Participants were then randomized 2:1 to receive either IV upacicalcet 25–300 mcg or placebo TIW at the end of each haemodialysis session. The initial* dose was adjusted every 3 weeks up to a maximum dose of 300 mcg. Dose titration period ran for 21 weeks, while evaluation period ran for 3 weeks. [ASN Kidney Week 2020, abstract TH-OR20]

Compared with the placebo arm, there was a greater fraction of patients in the upacicalcet arm who achieved a mean iPTH level of 60–240 pg/mL – the recommended target range as per Japanese guidelines – from week 22 to 24 (67 percent vs 8 percent; p<0.001).

Over time, serum iPTH level dropped with upacicalcet vs placebo (p<0.001), as did serum calcium corrected for albumin (cCa) level (p<0.001). “[For] serum cCa, [the] decrease following administration of the study drug [was rapid,] but the subsequent decline was slow,” said Dr Tadao Akizawa from the Showa University School of Medicine, Japan, who presented the findings.

Furthermore, serum phosphate level also dropped with upacicalcet vs placebo, but without a statistically significant difference.

There was also a significant drop in the level of bone metabolic markers (ie, bone alkaline phosphatase, total P1NP**, and TRACP-5b***) with upacicalcet vs placebo at week 24 (p<0.001 for all). “These results suggest that upacicalcet leads to suppressed bone turnover by [iPTH] reduction,” said Akizawa.