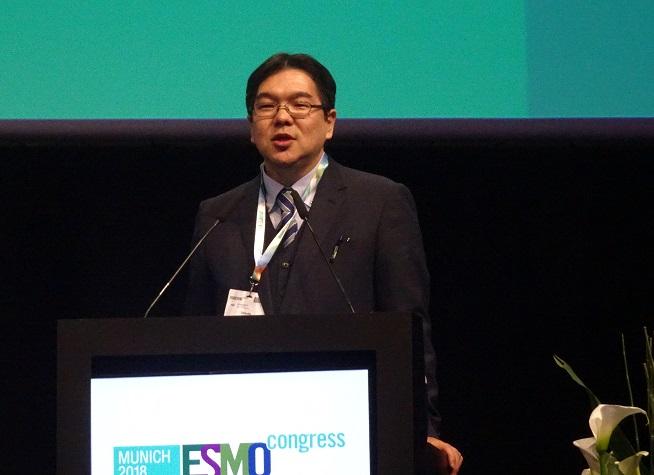 The drug combination comprising gemcitabine, cisplatin, and S-1 (GCS) led to significant survival benefits compared with the standard dual chemotherapy regimen of gemcitabine and cisplatin (GC) among patients with advanced biliary tract* cancer (BTC), according to results of the KHB01401–MITSUBA** trial presented at ESMO 2018.

A total of 246 chemotherapy-naïve patients (median age 68 years) with histologically confirmed advanced BTC from 39 institutions in Japan were randomized 1:1 to receive either GC or GCS. GC recipients received infusions of gemcitabine 1,000 mg/m2 and cisplatin 25 mg/m2 on days 1 and 8 every 3 weeks. The same GC dosage was given to GCS participants on day 1, plus oral S-1 40–60 mg given twice daily on days 1–7 every 2 weeks. The treatment ran for 24 weeks. [ESMO 2018, abstract 615O]

However, the median OS improvement of <1 month may be considered “modest”, according to discussant Professor Juan Valle from The Christie National Health Service Foundation Trust in Manchester, UK. The imbalance in the number of patients who had access to all three agents at some point (25 percent vs 100 percent for GC and GCS, respectively) during the post-protocol treatment period may have underestimated the impact on OS as there was a certain degree of crossover, Valle pointed out.

While the study authors indicated that GCS could be a new standard treatment for patients with advanced BTC, Valle disagreed, suggesting that it is more of “a new treatment option”.

“[These findings suggest] that we need to keep looking for improved treatment options for patients with BTC,” added Valle, underlining the lack of specific drug approved for the disease. “[This] highlights an unmet need and unfortunately, there are very few long-term survivors.”

Valle also raised the possibility of sequential treatment, rather than a combination of triple-drug therapy. However, this may only be determined if 100 percent of patients in both arms receive S1, which was not the case in the current study.

Three patients in the GCS arm underwent subsequent surgery which, according to Valle, may imply that the triple chemotherapy approach might benefit those with a high tumour burden who need to have a good performance status/treatment response (ie, reduction in tumour size) to facilitate surgery.

He also recommended further evaluation on the impact of GCS on QoL as well as its applicability in a non-Japanese population.