TITAN seals a win for apalutamide + ADT in mCSPC 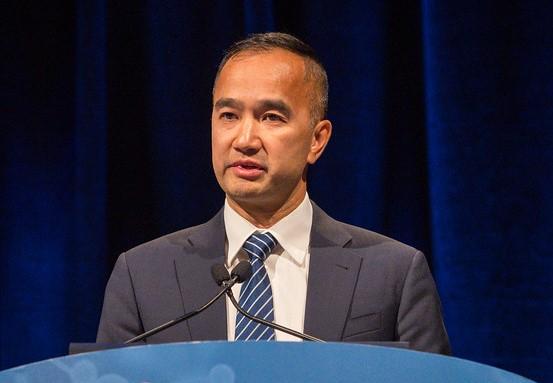 “These results support the addition of apalutamide to ADT for a broad range of patients with mCSPC … [including] patients with high or low volume disease, prior docetaxel, who had metastatic disease at diagnosis or relapse metastatic disease, and those who had received prior treatment for a localized disease,” said principal investigator Dr Kim Chi of BC Cancer and Vancouver Prostate Centre in Vancouver, Canada who presented the study during the ASCO 2019 Meeting.

Apalutamide is an oral, nonsteroidal, next-generation androgen receptor (AR) inhibitor that binds directly to the ligand-binding domain of the AR. It has been approved in the US and EU for patients with nonmetastatic castrate-resistant PC last year based on results from the SPARTAN study, according to Chi. The current study looked at later stage of the disease, mCSPC.

“The rationale behind the TITAN study was that direct inhibition of the AR by apalutamide may provide a more complete reduction of androgen signalling than ADT alone, leading to improved clinical outcomes,” he explained.

Compared with ADT alone, the addition of apalutamide significantly reduced the risk of death by 33 percent (hazard ratio [HR], 0.67; p=0.005) at the first interim analysis after a median follow-up of 22.7 months. At 2 years, 82.4 percent of patients in the apalutamide group were still alive compared with 73.5 percent in the ADT alone group. The results were consistent across subgroups, including those prespecified by disease volume. [ASCO 2019, abstract 5006; N Engl J Med 2019;doi:10.1056/NEJMoa1903307]

The coprimary endpoint of rPFS was also significantly greater with the addition of apalutamide than ADT alone (median, not reached vs 22.1 months, HR, 0.48; p<0.001), corresponding to a 52 percent reduction in risk. The 2-year rPFS rate was 68.2 percent vs 47.5 percent, respectively. Similar findings in favour of apalutamide were also seen across subgroups, regardless of previous docetaxel use and disease volume.

“On the basis of the results from this final analysis for rPFS and first planned interim analysis for OS, the independent data-monitoring committee recommended unblinding to allow crossover of patients receiving placebo to receive apalutamide,” Chi reported.

Participants in the double-blind phase III trial were 1,052 patients (median age 68 years) with mCSPC who were randomized 1:1 to apalutamide 240 mg/day or placebo, in addition to ADT. Previous docetaxel therapy (10.7 percent) and treatment for localized disease (16.4 percent had prostectomy or radiotherapy) were allowed. Majority of patients had high-volume disease (62.7 percent vs 37.3 percent with low-volume disease).

“The TITAN study met its dual primary endpoints, demonstrating significant benefits with apalutamide plus ADT in an all-comer, mCSPC population,” Chi summed up.

“Longer survival with apalutamide was observed even though a higher percentage of patients in the placebo group who discontinued the trial intervention received life-prolonging subsequent therapy for prostate cancer [37.6 percent vs 60.9 percent],” noted Chi and co-authors.

There was no substantial difference in the incidence of grade 3/4 adverse events (AEs; 42.2 percent vs 40.8 percent for apalutamide addition and ADT alone, respectively) or serious AEs (19.8 percent vs 20.3 percent). AEs of special interest which occurred more commonly in the apalutamide arm than the ADT arm included rash (27.1 percent vs 8.5 percent) and hypothyroidism (6.5 percent vs 1.1 percent). “[Rash] was predominantly grade 1/2 and largely asymptomatic. Hypothyroidism … was largely grade 1 and did not require intervention by definition,” Chi pointed out.

Rash was typically managed through dose interruption or reduction, or by using antihistamines and topical glucocorticoids; while hypothyroidism was monitored based on thyrotropin level and managed using levothyroxine, the researchers explained.

Invited discussant Dr Michael Carducci from Johns Hopkins Kimmel Cancer Center in Baltimore, Maryland, US said the study confirms that the addition of another agent such as apalutamide on top of ADT confers better outcome than ADT alone for patients with mCSPC. However, it is also important to determine which patients are most likely to benefit from which combination therapy.