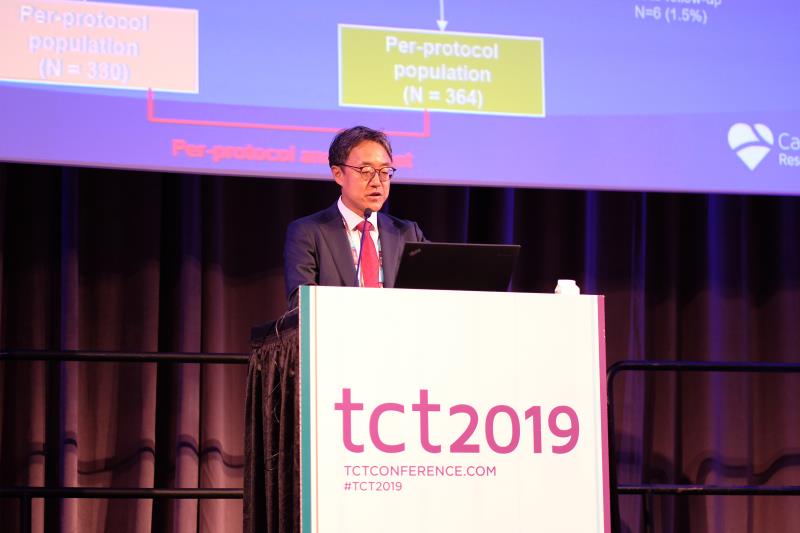 Standard-dose ticagrelor significantly increased the risk of bleeding events among Korean patients with acute coronary syndrome (ACS) compared with clopidogrel, according to the TICAKOREA* study presented at TCT 2019.

“European and US guidelines recommend that ticagrelor should be preferred [compared] to clopidogrel as a P2Y12 antagonist in ACS patients with or without PCI … However, owing to the differential propensity for bleeding and ischaemic events with response to antiplatelet therapy, the safety and effectiveness of the potent P2Y12 inhibitor ticagrelor in East Asian populations remain uncertain,” said lead author Dr Duk-Woo Park from the Division of Cardiology at Asan Medical Center, University of Ulsan College of Medicine in Seoul, Korea.

“[In this study,] among Korean ACS patients with or without ST elevation intended for invasive management, compared with clopidogrel, standard-dose ticagrelor was associated with a higher incidence of clinical[ly] significant bleeding** [at 12 months],” noted Park.

At 12 months, a significantly higher incidence of bleeding occurred in the ticagrelor compared with the clopidogrel group (11.7 percent vs 5.3 percent; hazard ratio [HR], 2.26; p=0.002).

The incidence of MACE (a composite of cardiovascular death, myocardial infarction, or stroke) was numerically, but not significantly, more common among patients who received ticagrelor than clopidogrel (9.2 percent vs 5.8 percent; HR, 1.62; p=0.07).

However, caution is needed when interpreting the ischaemic outcomes as the study was not powered “to detect a meaningful difference in efficacy outcomes,” noted Park.

The findings were consistent with the previous PHILO study which revealed a higher risk of bleeding and ischaemic events in an East Asian population, primarily Japanese, Taiwanese, and South Korean patients, who received standard-dose ticagrelor compared with clopidogrel, said Park. [Circ J 2015;79:2452-2460]

“Similar results from the PHILO and TICAKOREA trials targeting [an] East Asian population may raise considerable concern regarding the safety issue of a standard-dose of ticagrelor,” noted Park and his team.

Therefore, they are now conducting a new trial, TAILORED-CHIP++, to evaluate the efficacy and safety of low-dose ticagrelor (60 mg) compared with standard-dose clopidogrel in treating patients who are undergoing high-risk PCI.

“[The TICAKOREA study also] suggests that a tailored antiplatelet strategy to balance the risk of bleeding and ischaemia is required to improve the safety and efficacy of ACS treatment in East Asian patients,” Park added.

*TICAKOREA: Safety and efficacy of ticagrelor versus clopidogrel in Asian/Korean patients with acute coronary syndromes intended for invasive management