The journey of patient blood management in Malaysia 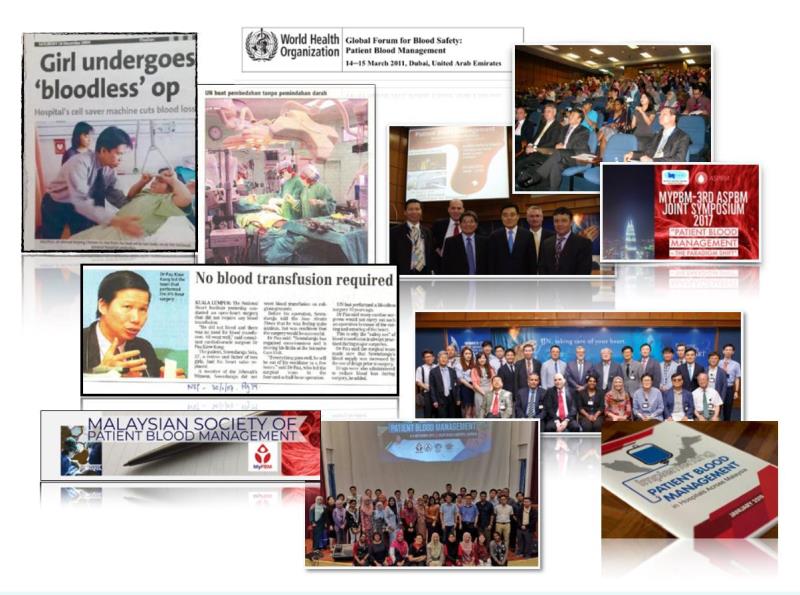 A journey has a starting point and a destination, and may be started intentionally or unintentionally. However, what makes a journey valuable are the people met along the way, the lessons learnt from successes and failures, as well as the determination of the ones involved to continue on. With this in mind, this writer embarks on ‘The journey of patient blood management (PBM) in Malaysia.’

As is the case in many regions, PBM, which is in essence patient-focused rather than product-focused, is at the fringe of medical practice in Malaysia, although it has been deemed as good medicine in the past and even more so now. And just as how ‘necessity is the mother of invention,’ this journey in Malaysia was initiated by individual practitioners who were responding to requests of patients for whom blood is not an option, namely, Jehovah’s Witnesses (JW).

This unusual or perhaps even daunting situation mirrors the pioneering of bloodless medicine and surgery in the world, whereby Dr Denton Cooley, generally recognized as the ‘father of modern bloodless surgery’ performed the first ‘bloodless’ open heart surgery in 1962. Thanks to the courageous and gracious works of Cooley, this milestone enabled the world of medicine to be freed from the notion that all major surgeries must be accompanied by an allogeneic blood transfusion (ABT).

This stellar example was followed some 30 years later in Malaysia, when the first bloodless procedure was performed in 1994 by pioneering consultant cardiothoracic surgeon Tan Sri Dato’ Dr Yahya Awang with consultant anaesthetist Datuk Dr Kathiresan Valliappa. The team performed a successful triple coronary artery bypass graft (CABG) on a JW patient with Takayasu arteritis. This was a feat, considering that the cardiothoracic fraternity was fairly young, as the establishment of the National Heart Institute (IJN) occurred just 2 years earlier, in 1992.

This success was followed by another, in 1995, involving a limb amputation in a patient with trauma and a haemoglobin (Hb) of 5 g/dL. The patient was treated with intravenous (IV) iron and subcutaneous (S/C) erythropoietin with an increase in Hb to 8 g/dL; the procedure was performed by the late Dato’ Dr Charles Vijayan David, at a time when scarcely any surgeon was agreeable to utilizing transfusion alternative strategies.

The 1990s also saw the start of the activities of the Hospital Liaison Committee (HLC) of JW in Malaysia. This group of individuals work together with healthcare professionals on alternative strategies through CME seminars and individual discussions; the goal is of building bridges to treating patients for whom blood is not an option. As evident by the two forerunners mentioned previously and the others that follow, this collaboration is beneficial for the patient and practitioner, while also promoting the growth of knowledge in the field of bloodless medicine and surgery, and later PBM.

The same decade saw the beginning of parallel efforts by the National Blood Centre (PDN), namely with the introduction of the rational use of blood products, by then PDN director, Dato’ Dr Yasmin Ayob. The efforts would be a long haul one, in getting clinicians to change practice, and gain an understanding of the true sense of PBM.

The next decade saw further milestones and progress—in 2001, the documentary ‘Transfusion Alternative Strategies – Simple, Safe, Effective’ by the Watch Tower Bible and Tract Society of Pennsylvania, was submitted to television station TV3 by Asia geographic director James Reynolds and PBM enthusiast Ong Kwan Teng; the documentary was screened in whole with Malay subtitles. The documentary also caught the attention of a number of doctors, who later wrote to TV3 and this society for further information.

Subsequently, the increasing needs of patients propelled the use of alternative strategies (which were later established as pillars for PBM). In 2004, an 11-year-old girl with congenital scoliosis was successfully managed by a team of experts including Professor Dr Ahmad Hata Rasit, in Sarawak where they used cell salvage and meticulous surgery to perform their first bloodless scoliosis correction surgery. The successful use of cell salvage in this instance convinced the doctors that it may be a good strategy to utilize when performing similar surgeries, given the fact that this reduces the incidence of transfusion-transmitted diseases.

It was in 2007, that another need arose in the cardiothoracic field, and Dr Pau Kiew Kong, a senior consultant cardiothoracic surgeon from IJN performed the first bloodless aortic valve surgery in a JW patient, skillfully optimized the patient’s own blood preoperatively, and used techniques to minimize blood loss intraoperatively. Pau has continued to use PBM strategies in treating patients and plays a crucial role in the progress of PBM in this region.

In 2006, the Master of Medicine (Transfusion Medicine) programme was established, ultimately developing doctors who would be involved in the governance of transfusion practices and later with PBM; the first group graduated in 2010. The end of this decade saw the Society for the Advancement of Patient Blood Management (SABM) come into the picture, and this writer’s exposure to PBM began in 2009, via SABM and the PBM/bloodless medicine and surgery programmes in the US. SABM has played an important role in supporting and connecting the multiple pathways, so that a concerted effort for the development of PBM in Malaysia could eventually take place.

From the year 2010 onwards, there were accelerated activities in PBM; SABM representatives Richard Melseth and James Reynolds presented the first CME on PBM at IJN. In 2011, Yasmin participated in the WHO Global Forum for Blood Safety: PBM. The first Malaysian PBM symposium was held in 2012, with the involvement of SABM members (Dr Pierre Tibi, Richard Melseth and James Reynolds), as well as doctors from Asia (Drs JongHyeon Lee and Danilo Kuizon), and IJN with Pau as chair and PDN as co-host. The symposium was made possible with the support of philanthropist Yanki Gan who believed in PBM as good medicine. The same year saw the beginning of parallel efforts by haematopathologist Dr Asral Wirda Ahmad Asnawi and team, who actively conducted transfusion safety workshops on a regular basis. This team was proactive in incorporating transfusion alternative strategies into their programme.

The year 2013 was a pivotal one as this was when a strong proponent of PBM was discovered during a CME presentation on transfusion alternative strategies by Steven Siva, a member of the HLC. Dr Jameela Sathar, a dedicated senior consultant haematologist who was with Wirda’s team, was intrigued by this knowledge on transfusion alternatives, recognized their worth, and kept on pursuing and propagating the strategies. 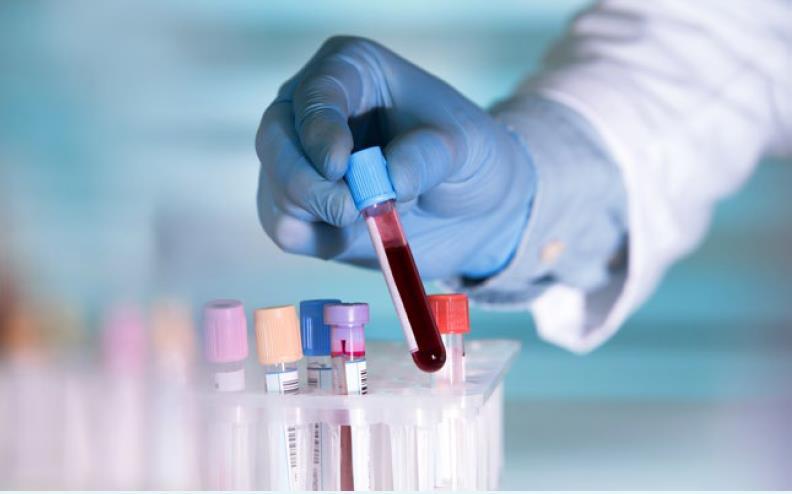 Workshops in 2014 onwards underwent a transformation from ‘transfusion safety’ to ‘PBM,’ and the three pillars of PBM were incorporated into the entire workshop programme. Another advocate of PBM was discovered in 2015, when PBM was introduced to Dr Carol Lim Kar Koong during a seminar on venous thromboembolism (VTE).

Subsequently, there was no looking back as this team of clinicians gathered more advocates from various disciplines in different parts of Malaysia and the knowledge of PBM spread throughout the nation by means of PBM workshops. It has become an important part of training for healthcare professionals in Malaysia to emphasize the true concept of PBM, which is patient-focused as well as incorporating PBM in different disciplines.

Those few years also saw the parallel efforts of the Malaysian Blood Transfusion Society (MBTS) incorporate PBM as part of their workshops with the intention of providing education in PBM and improving the governance of blood products. MBTS conducted biennial meetings inviting experts such as Professor Dr Aryeh Shander and Professor Dr James Isbister, to present. The exposure to the international experts on PBM moved proactive transfusion medicine specialist (TMS) Dr Intan Iliana Iliassa to work with the cardiothoracic team in the hospital to integrate PBM strategies into their practice.

Another special opportunity to work and grow together presented itself, when in 2016 the Asia-Pacific Society for Patient Blood Management (ASPBM) showed interest in Malaysia hosting their next symposium. Thus in 2017, the MyPBM-3rd ASPBM symposium was held in IJN, and this writer worked with Pau, Jameela and Lim, along with the ASPBM team from South Korea. The symposium also presented the opportunity to learn from Professor Dr Alhossain Khalafallah, an Australian-based haematologist and Shander, of SABM, on the significantly improved clinical outcomes possible with PBM including the attractive economic advantages.

The symposium was a landmark for several reasons: the term MyPBM was coined, the nucleus of the MyPBM was formed and the first PBM survey was launched at the outset of the symposium, collecting the valuable comments of more than 1,000 clinicians. The symposium was also the platform of long-term relationships with PBM organizations such as ASPBM and SABM; working on the symposium also propelled the efforts of collaborating with the Ministry of Health Malaysia (MOH) to promote PBM.

Hence, the next couple of years saw the move of Jameela and team submit a proposal to the MOH for PBM implementation in hospitals across Malaysia. The move sent ripples across the medical fraternity, and so the effort to continue to promote PBM is now accomplished by the parallel paths of the clinicians and PDN. The Malaysian Society of Patient Blood Management (MyPBM) was officially formed in 2019, with even more PBM advocates and the development of recent local PBM guides.

The journey that started almost 30 years ago has brought together many beautiful people and imparted valuable lessons. Just as in an orchestra, although individual musicians play different instruments and are in the limelight at different times, yet as an ensemble, it creates beautiful and meaningful music. That is the case with this journey of PBM in Malaysia, a journey that this writer anticipates may eventually create a concerted, beautiful outcome—that of optimal patient care, satisfying medical practice and abundant economic benefits.