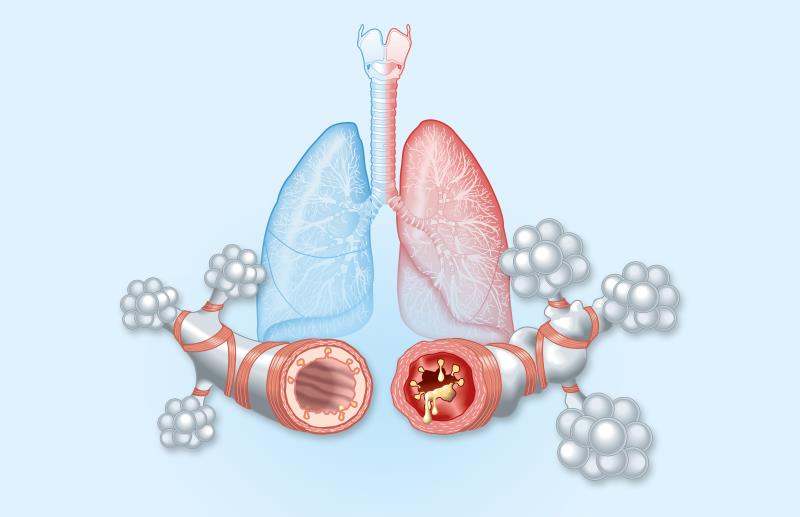 In patients with uncontrolled, moderate-to-severe asthma, tezepelumab reduced mucus plugging, which was also tied to improvements in lung function parameters, according to an exploratory post hoc analysis of the CASCADE* trial presented at ERS 2022.

Mucus plugs are associated with eosinophilic airway inflammation and airway obstruction in patients with asthma. However, there are not enough RCTs evaluating the impact of biologic therapy on mucus plugging, Brightling noted.

This phase II mechanistic trial involved 116 patients with uncontrolled, moderate-to-severe asthma who were randomized to receive either subcutaneous tezepelumab 210 mg every 4 weeks (n=59) or placebo (n=57) in addition to standard of care for 28 weeks. Patients were followed up until 40 weeks. Mucus scoring in 18 lung segments was determined by using a computed tomography scan at baseline and end of treatment. [ERS 2022, Late-Breaking Abstract]

At end of treatment, patients who received tezepelumab had a greater reduction in mucus plugging score from baseline compared with placebo (mean change, -1.7 vs 0.0; pnominal=0.007).  “[This is] quite a striking difference between the two treatment groups,” said Brightling.

Among tezepelumab-treated patients, the reduction in mucus score further correlated with improvements in lung function, as reflected by the change in pre-bronchodilator FEV1** and FEF25–75%*** from baseline (Spearman correlation pnominal=0.00014 and 0.0006, respectively).

“We know that mucus plugging is an incredibly important part of the asthma paradigm, [and] we recognized that it’s an important element that we want to reduce in our patients with asthma … With the CASCADE study, it’s the first time that we’ve been able to demonstrate … a reduction in mucus plugging in response to a biologic therapy [that was] targeted extremely well vs placebo,” said Brightling.

Overall, mucus scores were reduced after treatment with tezepelumab, and those with the greatest reduction in mucus plugging achieved better improvements in lung function, he concluded.

*CASCADE: Study to evaluate tezepelumab on airway inflammation in adults with uncontrolled asthma