TAVR excels in low-risk patients with AS in landmark studies 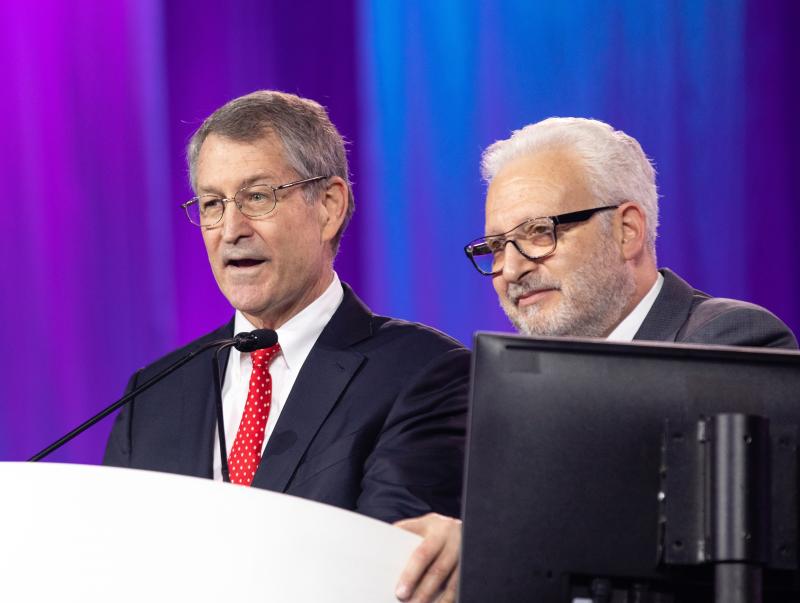 Two landmark studies on transcatheter aortic valve replacement (TAVR) showed that not only was TAVR noninferior to surgical AVR (SAVR) in patients with severe aortic stenosis (AS) at low surgical risk, it was superior over the latter in the PARTNER 3 trial using the SAPIEN 3 valve.

“This is beyond anything we could have expected, mostly because surgery is so good in treating AS in these low-risk patients … Our hope was that TAVR would be noninferior or comparable to surgery, and we were surprised to find an almost 50 percent reduction in the primary endpoint, from 15.1 percent in the surgical group to 8.5 percent with TAVR,” said Dr Martin Leon of Columbia University Irving Medical Center and New York-Presbyterian Hospital, who presented the PARTNER 3 findings at the 2019 ACC Annual Scientific Session.

Thus far, TAVR has been approved by the US FDA for patients with severe AS who are at intermediate- or high-risk for surgery. The current two trials charted new frontier in TAVR by moving down the risk spectrum.

“This is a historic moment, and of all of us here should remember it as such,” declared panel discussant Professor Eugene Braunwald of Brigham and Women's Hospital, Boston, Massachusetts, US.

“This is a landmark study because it involves 80 percent of the people who are currently being treated with surgery for AS,” Leon added.

At 1 year, TAVR significantly reduced the primary composite endpoint of death, stroke, or rehospitalization by almost half compared with SAVR (rate, 8.5 percent vs 15.1 percent; p<0.001 for noninferiority, hazard ratio [HR], 0.54; p=0.001 for superiority).

“Taken by themselves, each component of the primary endpoint also favoured TAVR, which is confirmatory evidence of the outcome,” said Leon.

Patients treated with TAVR also required a shorter length of hospital stay (3 vs 7 days; p<0.001), had lower risk of poor treatment outcome at 30 days based on KCCQ score (p<0.001), and fared better at functional recovery and self-reported quality-of-life measures at 30 days (p<0.01 for both) than patients undergoing surgery.

“Surgery eventually catches up to TAVR in terms of functional recovery and quality of life, but it takes several months,” observed Leon. “TAVR is a less invasive procedure, so we expect an earlier return to normal daily activities compared with surgery. There has also been an evolution of TAVR technology, increased operator experience and enhanced procedural techniques, all of which combine to lower complications after TAVR especially in the lowest risk patients.”

There were no significant differences between the two groups in terms of major vascular complications, need for new pacemaker, or moderate or severe paravalvular regurgitation. However, more incidence of new left bundle-branch block occurred in the TAVR group, which Leon explained may be a predictor of future need for new pacemaker.

“The results of this trial in low-risk patients indicates that the choice of TAVR vs surgery for severe AS should be independent of surgical risk profile assessments,” Leon concluded. “Based upon these findings, TAVR, through 1-year, should be considered the preferred therapy in low surgical risk AS patients.”

Findings from another similar study of TAVR, the Evolut Low Risk Trial, further strengthened the role of TAVR in low-risk AS. TAVR was noninferior to SAVR for the primary composite endpoint of death or disabling stroke at 24 months (5.3 percent vs 6.7 percent; posterior probability of noninferiority >0.9999). [ACC.19, session 404-09; N Engl J Med 2019; doi:10.1056/NEJMoa1816885]

Early outcome at 30 days for the composite of all-cause mortality or disabling stroke actually favoured TAVR significantly over SAVR (0.8 percent vs 2.6 percent). The favourable outcome with TAVR in major stroke was sustained at 12 months (0.8 percent vs 2.4 percent), although the difference in mortality became nonsignificant (0.5 percent vs 1.3 percent).

Unlike PARTNER 3, the Evolut Low Risk Trial compared TAVR with a self-expanding supraanular bioprosthesis with SAVR. Majority of the TAVR valves were Evolut R (74.1 percent), followed by Evolut PRO (22.3 percent) and CoreValve 31 (3.6 percent). Subjects were 1,468 low-risk patients with AS (mean age 74 years).

Compared with surgery, incidence of the secondary safety endpoints were significantly lower with TAVR in terms of disabling stroke (0.5 percent vs 1.7 percent), acute kidney injury (0.9 percent vs 2.8 percent), bleeding complications (2.4 percent vs 7.5 percent), and atrial fibrillation (7.7 percent  vs 35.4 percent), all at 30 days.

Moderate or severe aortic regurgitation (3.5 percent vs 0.5 percent) and pacemaker implantation (17.4 percent vs 6.1 percent) were more common with TAVR vs SAVR.

“Given this data, it now seems reasonable to consider moving TAVR in low-risk patients to a class I guideline indication on par with surgery for patients with severe AS,” said Reardon.

Nonetheless, investigators from both trials noted that the follow-up time for the studies was relatively short.

“The most important limitation of this trial is that our current results reflect only 1-year outcomes and do not address the problem of long-term structural valve deterioration,” wrote the PARTNER 3 investigators, a sentiment also shared by Reardon and co-authors.

Another limitation stems from exclusion of patients who were incompatible for TAVR valves anatomically.

“The choice of TAVR vs surgery in AS patients should be a shared-decision making process, respecting patient preferences, understanding knowledge gaps (especially in younger patients), and considering clinical and anatomic factors,” advised Leon.

Investigators of both trials stated that the patients will be followed for 10 years.