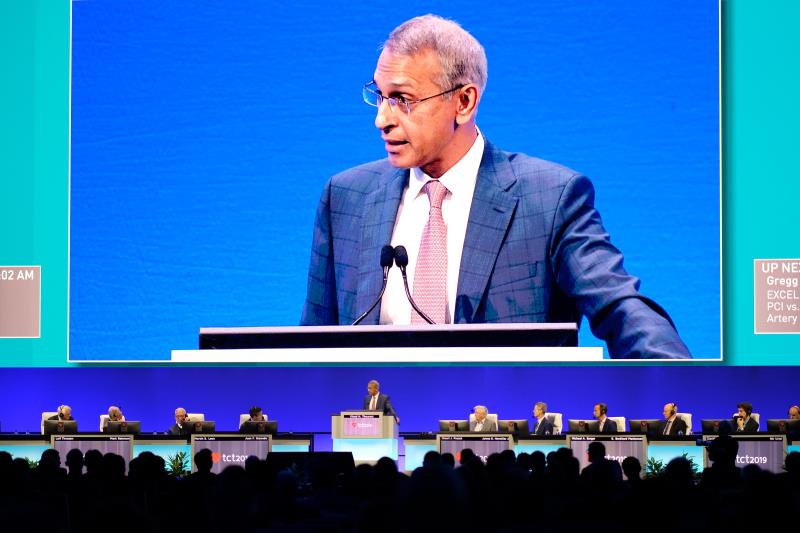 Dr Vinod Thourani, chair of the Department of Cardiac Surgery at Medstar Heart and Vascular Institute

Patients with severe aortic stenosis (AS) and intermediate surgical risk may benefit from either transcatheter (TAVR) or surgical aortic valve replacement (SAVR) through 5 years of follow-up, according to midterm data from the PARTNER 2A trial presented at the 31st Transcatheter Cardiovascular Therapeutics (TCT) scientific symposium 2019.

“The primary endpoint [of] death from any cause or disabling stroke … was similar for TAVR and surgery. [Both approaches resulted] in improved cardiac symptoms and quality-of-life measures compared with baseline, and these favourable changes were sustained at 5 years,” said lead investigator Dr Vinod Thourani, chair of the Department of Cardiac Surgery at Medstar Heart and Vascular Institute.

PARTNER 2A involved 2,032 patients (mean age, 82 years; average STS score, 5.8 percent) who were grouped into two according to eligibility for transfemoral access or the need for transthoracic access. These patients were then randomized to undergo either TAVR with the Sapien XT balloon-expandable system (n=1,011) or surgery (n=1,021).

The noninferiority of TAVR to surgery in terms of the primary endpoint had been reported in the main 2-year results released in 2016, with TAVR providing greater benefits in the transfemoral subgroup. [N Engl J Med 2016; 374:1609-1620]

Rates of valve-related rehospitalizations and reinterventions, especially after 2 years, were higher with TAVR, although the treatment for the reinterventions was more well tolerated in the TAVR group.

Moderate-to-severe paravalvular regurgitation (PVR) also occurred at a higher rate with TAVR than with surgery throughout the 5-year follow-up, and this outcome was associated with an elevated risk of late mortality.

“Midterm (at 5 years) valve haemodynamics indicated no important … differences in TAVR or surgical bioprosthetic valves,” Thourani noted, adding that early improvements in functional status and quality of life were maintained through 5 years for both TAVR and SAVR patients.

According to the investigator, the findings drive home the point that TAVR should remain an alternative to surgery in intermediate-risk patients with severe AS, while surgery may be the preferred alternative to transthoracic TAVR in patients without acceptable transfemoral access.

“[Then again], the clinical applicability of these findings should be tempered, as Sapien XT is no longer commercially used in the US, and the current generation Sapien 3 is lower in profile (only ~5 percent as transthoracic cases) and is associated with much lower rates of moderate-to-severe PVR (<1 percent),” Thourani explained.

“This is a landmark trial in this field and resulted in approval for intermediate-risk patients. The higher paravalvular aortic regurgitation (leak) rate with TAVR is an important limitation, although the … currently commercially available … third-generation S3 valve … has a skirt around the valve frame specifically to reduce the incidence of this complication,” he said. “Further long-term data from the S3 cohort of the PARTNER 2 trial also are awaited.”