Tafamidis still the only approved therapy for ATTR-CM in Asia 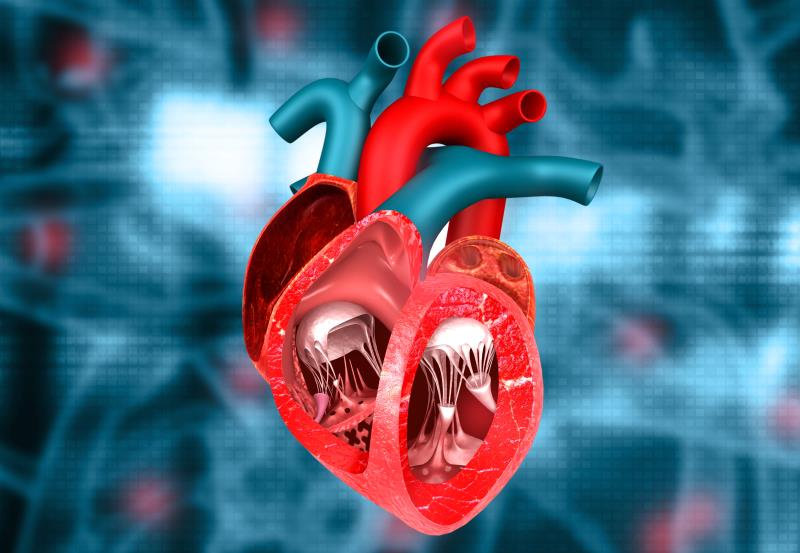 Transthyretin amyloid cardiomyopathy (ATTR-CM) is a progressively debilitating disease with a formidable symptom burden and an average survival of 2–5 years from diagnosis. In 2019, the US Food and Drug Administration approved tafamidis (Vyndamax) as the first disease-modifying therapy for ATTR-CM. Since then, tafamidis has been approved for the treatment of ATTR-CM in over 55 countries including Japan, Australia, and Singapore. MIMS Doctor interviewed Dr Tang Hak Chiaw, consultant cardiologist at Novena Heart Centre, Singapore, about the types and clinical presentation of ATTR-CM in Singapore, and the role of tafamidis in the treatment of this often underdiagnosed and fatal disease of the heart muscle.

Hereditary vs wild-type ATTR-CM
There are two distinct forms of ATTR-CM, classified according to the transthyretin gene mutation – hereditary and wild type.

Wild-type ATTR was detected in about 13 percent of patients with heart failure with preserved ejection fraction (HFpEF), and in 16 percent of those with transcatheter aortic valve implantation (TAVI). [Eur Heart J 2015;36:2585-2594; Eur Heart J 2017;38:2879-2889] Several autopsy studies also found wild-type ATTR cardiac amyloidosis in 25–36 percent of patients older than 80 years old. These data show that ATTR-CM may not be as rare as previously thought.

Hereditary ATTR also represents a significant portion of ATTR-CM and affects several organs. “Depending on the type of mutation, the clinical spectrum of hereditary ATTR varies widely, with different degrees of neurological and cardiac involvement,” said Tang.

ATTR-CM in Singapore: Epidemiology and clinical characteristics
“We do not have local prevalence data, and the prevalence of TTR amyloid depends on the diagnostic modalities, age, and sex of population studied,” said Tang. “In Asians, similar to our western counterparts, wild-type ATTR is more common among elderly men, with later age of onset of disease compared with hereditary ATTR.”

For hereditary ATTR-CM, it has been reported that specific TTR mutations are associated with geographic distributions and races, which may impact the clinical characteristics. For example, 3.5 percent of African Americans carry the TTR mutation Val122Ile, which manifests predominantly as cardiomyopathy. [Genet Med 2017;19:733-742]

“However, data on the genetic make-up of hereditary ATTR-CM in Asians are scarce,” said Tang. A small retrospective study in China, involving 23 patients with hereditary ATTR-CM, found the mutations to be heterogeneous, with 15 types identified. Interestingly, the onset of symptoms was not obvious in the heart and mainly manifested as peripheral neuropathy and autonomic neuropathy. The hallmark echocardiography result was left ventricular (LV) hypertrophy, particularly a thick ventricular septum and posterior wall, combined with preserved left ventricular ejection fraction (LVEF). [Orphanet J Rare Dis 2019;14:251] These findings highlight the need for further studies on this topic.

“While we do not have local data on ethnic differences with this disease, in clinical practice, we have not observed any obvious differences in clinical characteristics among ATTR-CM patients of different ethnicities in Singapore,” said Tang.

ATTR-CM is often misdiagnosed, especially early in its course due to nonspecific symptoms and multisystem involvement. Clinicians should be made aware of the complex clinical profile of ATTR-CM to avoid misdiagnosis in practice. [J Clin Med 2022;11:2148; Orphanet J Rare Dis 2019;14:251]

Tafamidis for ATTR-CM: Clinical evidence
The advent of tafamidis, an oral transthyretin stabilizer, has revolutionized the management of ATTR-CM as the first disease-modifying medication to improve cardiovascular outcomes. Historically, symptomatic management for ATTR-CM was the only option, and the treatment of the underlying disease was limited to liver or heart transplantation. [Ann Pharmacother 2020;54:470-477]

Overall, oral tafamidis was well tolerated with a safety profile comparable to placebo when used for the treatment of adult patients with ATTR-CM, either hereditary or wild-type. The majority of events were mild to moderate in severity. No major safety concerns were identified in patients with ATTR-CM treated with tafamidis. [N Engl J Med 2018;379:1007-1016; J Heart Lung Transplant 2019;38(suppl):S204]

Long-term survival with tafamidis
A recent analysis of the ATTR-ACT (Tafamidis in Transthyretin Cardiomyopathy Clinical Trial) and ATTR-ACT long-term extension (LTE) trials showed that patients who received continuous tafamidis in both trials had a median survival of 67.0 months (95 percent confidence interval [CI], 47.0–N/E), compared with only 35.8 months for patients who were on placebo in ATTR-ACT and then switched to tafamidis in the LTE study. This represents a clinically significant reduction of 41 percent in the risk of all-cause mortality in the continuous-tafamidis arm. Additionally, it highlights the benefits of starting treatment early. [Circ Heart Fail 2022;15:e008193]

The preliminary 5-year survival rate was 53.2 percent in the continuous tafamidis group and 32.4 percent in the placebo-to-tafamidis group. In addition, mortality reductions were generally consistent across the subgroups of patients with wild-type or hereditary ATTR-CM. [Circ Heart Fail 2022;15:e008193]

Tafamidis in Asian patients
Currently, tafamidis is the only approved disease-modifying therapy for the management of ATTR-CM in this part of the world. Tafamidis has been approved for ATTR-CM since February 2020 in Singapore and since March 2019 in Japan. Various other pharmacological therapies are used oﬀ-label (eg, diflunisal, patisiran, and inotersen) or in the development pipeline, but have not been approved for ATTR-CM. [J Clin Med 2022;11:2148]

“Based on clinical experience in Singapore, the eﬃcacy and safety profile of tafamidis in Asian patients is similar to what we would expect based on the literature,” said Tang. Interestingly, the ATTR-ACT trial included Asian patients, albeit in small numbers [N Engl J Med 2018;379:1007-1016]. There is also an ongoing clinical trial to assess the efficacy and safety of tafamidis in adult Chinese patients with ATTR-CM. [Clinicaltrials.gov identifier: NCT04814186]

While we look forward to more data, what we have thus far have been reassuring, said Tang. A real-world study of tafamidis in Japanese patients with wild-type ATTR-CM suggested that tafamidis is safe and may maintain the status of disease severity in the short term in selected patients. The rate of cardiovascular-related hospitalizations per year was 0.19, the 1-year survival rate was 92 percent, and there was no discontinuation of tafamidis due to adverse events. In patients who continued tafamidis for 12–18 months, there was no significant deterioration from baseline in high-sensitivity cardiac troponin T level, plasma B-type natriuretic peptide level, LVEF, interventricular septum wall thickness, or value of left ventricular longitudinal strain. [Circ J 2022;86:1121-1128] 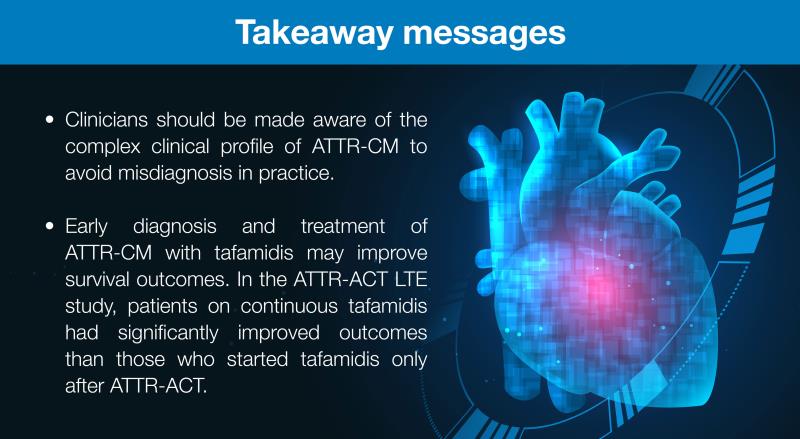