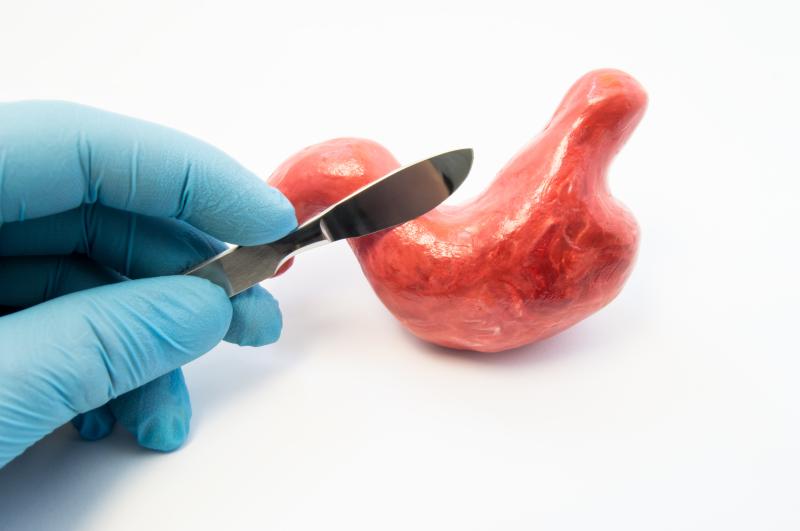 Patients with type 2 diabetes (T2D) and severe obesity may have a greater chance of complete T2D remission 1 year after gastric bypass rather than sleeve gastrectomy, according to results of the Oseberg* trial.

“[W]e showed a substantially greater 1-year glycaemic effect with gastric bypass than with sleeve gastrectomy, which challenges the common view that the surgical procedures yield similar results,” said the researchers.

The study, conducted at the Vestfold Hospital Trust in Tønsberg, Norway, enrolled 109 adults (mean age 47.7 years, 66 percent female) with T2D** (median HbA1c 7.9 percent, median diabetes duration 5 years) and severe obesity*** (mean BMI 42.3 kg/m2). They were randomized to undergo either gastric bypass (n=54) or sleeve gastrectomy (n=55). All patients were on a low-calorie diet (<1,200 kcal/day) from 2 weeks pre-surgery. Patients were followed up at weeks 5, 16, and 34, and at 1 year after surgery, with ongoing annual follow-ups.

Patients in both surgical groups experienced an increase in disposition index, a measure of β-cell function as determined through an intravenous glucose tolerance test, in the 1 year after surgery, at a comparable rate between groups (between-group difference, 55; p=0.52).

The comparable β-cell function results may suggest that the two surgeries do not truly differ from one another, said the researchers. However, this result should be interpreted with caution, as other measures of insulin sensitivity may have yielded different findings.

Sensitivity analysis did not reveal a significant difference in normoglycaemia between gastric bypass and sleeve gastrectomy recipients (RR, 1.56; p=0.091).

Patients who underwent gastric bypass experienced greater total loss (from baseline) in body weight compared with those who underwent sleeve gastrectomy (29 percent vs 23 percent; p<0.0001), as well as reduction in BMI (-12.1 vs -9.7 kg/m2; p<0.0001) and fat mass (52 percent vs 40 percent; p<0.0001). Likelihood of using antidiabetic medications after 1 year was lower in gastric bypass vs sleeve gastrectomy recipients (15 percent vs 37 percent; p<0.0001). Both groups experienced improvements in acute insulin response to glucose and insulin sensitivity, a surprising finding, said the researchers, “given the strong association between bodyweight and insulin sensitivity.”

While lipid-lowering medication use was lower in the gastric bypass than sleeve gastrectomy group at 1 year (17 percent vs 33 percent; p=0.042), only gastric bypass recipients experienced reductions in total and LDL-cholesterol levels (between-group difference, 0.67 and 0.63 mmol/L, respectively; p<0.0001 for both).

“The Oseberg study brings us closer to defining the optimal surgical approach for the treatment of patients who are overweight or obese with T2D,” said Professor Paul O’Brien from the Centre for Obesity Research and Education, Monash University, Melbourne, Australia, in a commentary. [Lancet Diabetes Endocrinol 2019;doi:10.1016/S2213-8587(19)30352-3]

“[However], to justify the risks and invasiveness of surgical intervention, the effect on weight loss and glycaemic control should be substantial and durable,” he added, noting the weight regain and reduction in remission several years after the STAMPEDE# study.

“Considering these results alongside existing evidence, gastric bypass should be considered the procedure of choice while we await longer follow-up data for confirmation that the difference in effect is durable,” he said.

This question may be answered after the ongoing 5-year follow-up of the Oseberg trial, the researchers said.