Once-a-month prevention pill succeeds in malaria-endemic areas
Jairia Dela Cruz, 2 days ago
Monthly prophylaxis with the fixed-dose combination of naphthoquine-azithromycin (NQAZ) is well tolerated and confers significant protection against infection with Plasmodium parasites among individuals residing in malaria-endemic areas in Southeast Asia, as shown in the results of a phase III trial.

Suiting up in a time of disaster In mid-March 2019, news of the Sungai Kim Kim chemical pollution disaster and its impact on thousands of Johor residents caught national attention. As healthcare services rushed in to provide medical aid, a temporary command centre was set up at Pasir Gudang Indoor Stadium to centralize efforts. MIMS Pharmacist speaks to three pharmacists about their experiences as volunteers there.

From news event to ground reality

For Song Yick Yuan, a community pharmacist in Johor, what he saw as he first entered Pasir Gudang Indoor Stadium made a deep impression.

“When we arrived, there were a lot of emergency beds in the stadium; about 20 to 30 of them.” Song’s voice was sober over the phone as he recalled the moment. “It was the first time we saw a scene like that in person. You normally only see it on TV shows or in the news.”

Like many others, what Song knew of the Sungai Kim Kim disaster had been the coverage provided via mainstream news channels. When a call for volunteers at the medical centre was issued by the Malaysian Pharmaceutical Society (MPS) and spread through Facebook and Whatsapp channels, he was one of those who decided to take up the job.

“Our chief pharmacist passed on the notice in our pharmacy’s Whatsapp group,” said Song, who works in Taman Mutiara Mas. “At the time, it was 17th March, which was already 1 to 2 weeks after the incident. I thought that if after all that time they were still in need of volunteers, it must be quite serious.”

When Song called up Khor Yong Xin, a colleague and fellow community pharmacist from another branch, he found that not only did she have similar thoughts, but both coincidentally had time off work for the next couple of days. The two made their way to the stadium where they were joined by other healthcare professionals assigned there or also volunteering. While many who arrived at the centre were fellow Johoreans, some of those who answered the MPS’ call were from out of state, including Ong Aik Liang, a ward supply pharmacist at Hospital Canselor Tuanku Muhriz UKM in Kuala Lumpur.

“When I received the message from the MPS, I quickly got in touch with the person in charge just to make sure they had a slot for me,” said Ong. “It said they lacked manpower for the 17th and the 18th (of March). I wanted to go immediately, but there was a delay in arrangements, hence I only managed to go on the 18th.”

Ong’s head of department allowed him to take leave on that day and he made an early morning drive down south in his car. While his official shift had been scheduled for 3 pm to 11 pm, Ong describes it as a “12 to 12” experience.

“Everything was self-funded,” said Ong with a smile. “It was a little last minute. And then I had to quickly look for a room to stay overnight since it was late by the time we actually finished our shift.”

Once the volunteers reported in to their respective shifts, it was time to get to work.

In the hazard zone 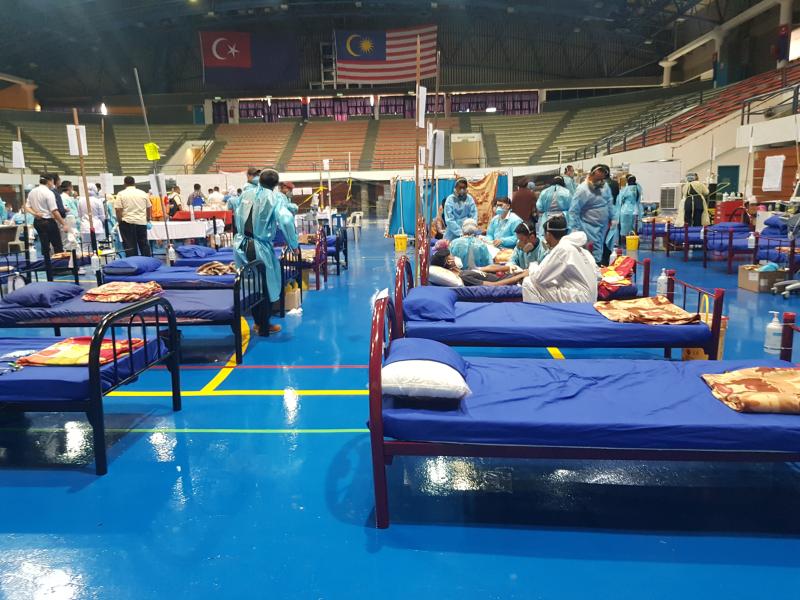 Biohazard precautions in the stadium were strict, with all incoming staff and patients scanned by Fire and Rescue Department officers before entering. If any traces of chemical contamination were found on a person, they were required to change all their clothes, take a shower, and don clean clothes provided by the officers before being allowed inside.

“By the time they came in, it was actually quite safe for the staff to see the patients directly,” said Song. Still, as a matter of safety, all medical staff on-site had to be suited up in personal protective equipment (PPE), which included masks, gloves and gowns.

“The patients were also advised to wash their clothes separately at home, as the toxic chemicals could transfer to other clothing items,” said Khor. “All volunteers were required to be scanned before leaving the treatment centre too.”

The pharmacists worked on dispensing medication and counselling patients on their usage. While some like Khor, Song and Ong were based at the centre’s makeshift dispensing counter, others handled the stock section where fresh PPE kits and injections for the inpatient section were distributed.

In comparison to the first few days of the treatment centre’s operations, the number of patients had dropped significantly. According to a post-event report by the MPS, the ground command centre at the stadium was closed at 12 pm on the 19th itself due to the relatively smaller numbers.

However, even with the reduced pace of patients, Khor recalls seeing at least 120 people between 8 am and 4 pm. “Most of the patients came with symptoms like breathlessness, dizziness, eye irritation, nausea, vomiting and tightness in the chest,” said Khor. “A few patients with more serious conditions were referred to a hospital for further treatment.”

According to Ong, while the patients ranged from infants to the elderly, most of those he saw were working adults. As schools in the affected area had been closed by that time, less children were exposed to the chemical pollution, but many adults were still compelled to carry out their daily work.

Ong is quiet as he remembers a case which stood out to him—a mother and her baby aged less than 6 months old.

“From when they entered the stadium, and for more than an hour after that, the baby wouldn’t stop crying,” said Ong. “I checked with some of the doctors to find out what was wrong. They couldn’t determine what was the main cause at first … whether it was related to any chemical exposure, causing irritation to the upper respiratory tract.”

The crying was loud and persistent enough that it drew the attention and the sympathies of almost all the healthcare providers stationed there.

“It was quite sad, because we could see that the mom especially … that she was quite helpless, because she couldn’t do much to help her child,” said Ong. “Many people suffered, especially the young ones. Hopefully all this can be avoided in the future.” When asked if they would do it again, all three pharmacists unanimously said ‘yes’.

To Song, for whom the experience was a first, the opportunity was extraordinary.

“We all don’t want these incidents to happen, but to have the chance to get to help out was quite special,” he added. “This was the first time I tried volunteering. Normally when we see Mercy Malaysia and other [medical volunteer] efforts on TV, those usually involve mostly doctors. We don’t see pharmacists much.”

Ong felt that pharmacists’ skills in times of disaster were sometimes overlooked. In his experience, many people didn’t quite understand what pharmacists could specifically do in such situations.

“They forget that patients need medication when they’re discharged, and it’s not necessarily straightforward, especially for children or babies, because we have to calculate their doses,” said Ong. “We can do more than just dispense medication from behind the counter. But not many pharmacists tend to participate, and we usually see recruitment efforts more for paramedics, doctors and nurses. The importance of our role could be emphasized more.”

For Khor, the chance to offer a helping hand to those in need with her medical knowledge was one of the reasons she had chosen pharmacy as a profession.

“[Our particular experience] was quite peaceful as there weren’t many red zone patients,” said Khor, laughing. “But I’m glad that I’m given the opportunity to contribute to this relief event. I hope I can have more opportunities to volunteer in public health events in future.”

Once-a-month prevention pill succeeds in malaria-endemic areas
Jairia Dela Cruz, 2 days ago
Monthly prophylaxis with the fixed-dose combination of naphthoquine-azithromycin (NQAZ) is well tolerated and confers significant protection against infection with Plasmodium parasites among individuals residing in malaria-endemic areas in Southeast Asia, as shown in the results of a phase III trial.