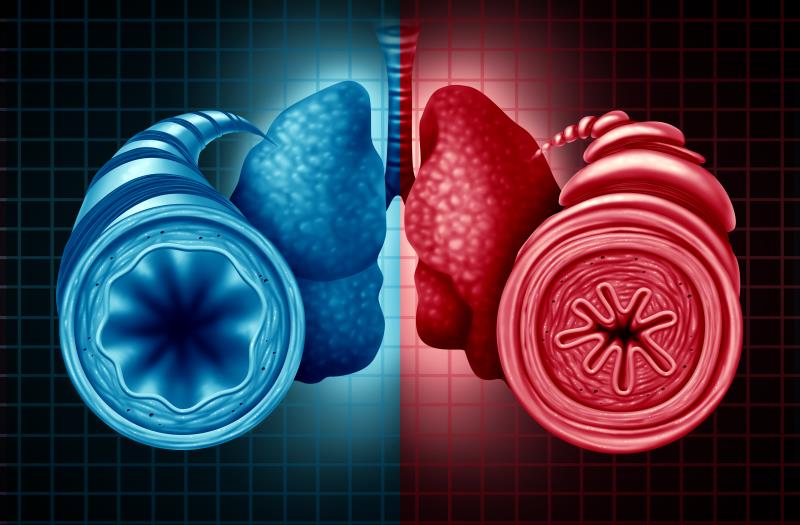 Treatment with fluticasone furoate/umeclidinium/vilanterol (FF/UMEC/VI), a LAMA/ICS/LABA combination, significantly improves trough FEV1* in symptomatic patients with inadequately controlled asthma compared with FF/VI only, according to the CAPTAIN** study presented at AAAAI 2020.

“Key goals of asthma therapy are improvement in lung function and symptom control,
and our results indicate that once-daily FF/UMEC/VI in a single inhaler may aid in achieving
these goals for the studied population,” said Professor Ian Pavord from the University of Oxford in Oxford, UK, and his team.

Similarly, those in group 3 demonstrated a significant improvement in trough FEV1 from baseline to week 24 compared with patients in group 6 (168 vs 76 mL; mean difference, 92 mL; p<0.001).

Adverse events (AEs) were comparable between the FF/UMEC/VI and FF/VI only treatment groups. “The addition of UMEC to FF/VI did not have a negative impact on either type, severity, or incidence of AEs, including AE of special interest, demonstrating that the triple therapy combination was well tolerated,” Pavord and team noted.

“Addition of UMEC 62.5 mcg to both doses of FF/VI offered significant improvements in lung function, [as shown by greater improvements in trough FEV1, and] … reductions in moderate/severe exacerbation rates,” they concluded.

“Significant improvements were also seen with added UMEC 31.25 mcg, [but this was] not adjusted for multiplicity,” they added.