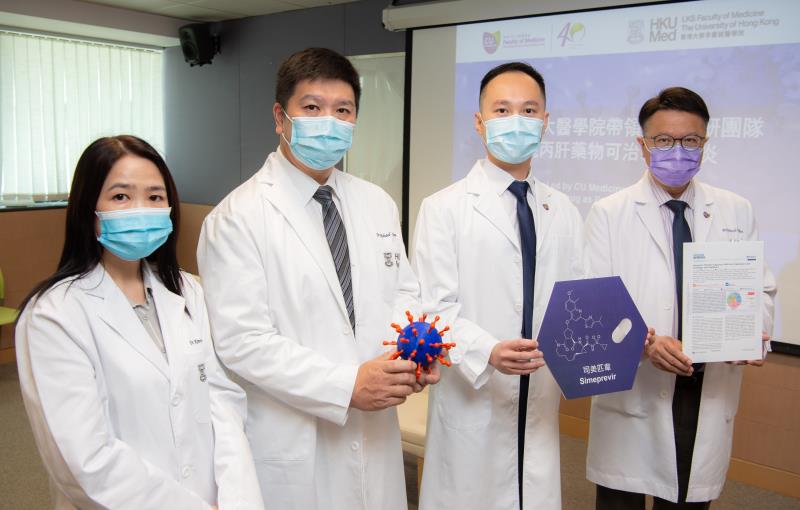 “Given our goal of identifying immediately usable and practical drugs against SARS-CoV-2, we prioritized a list of repurposed drug candidates for in vitro testing based on joint considerations of safety, pharmacokinetics, drug formulation availability, and feasibility of rapidly conducting clinical trials,” explained the researchers. “We focused on a panel of US FDA-approved antivirals, including the macrocyclic hepatitis C virus [HCV] protease inhibitor simeprevir.” [ACS Cent Sci 2021;doi:10.1021/acscentsci.0c01186]

“While simeprevir is a potential candidate for clinical use alone, we hypothesized that it may also have a synergistic effect with remdesivir, thereby mitigating the latter’s reported adverse effects, improving its efficacy, and broadening its applicability,” wrote the researchers. [Lancet 2020;395:1569-1578]

“Indeed, combining simeprevir and remdesivir at various concentrations provided much greater suppression of SARS-CoV-2 replication than using remdesivir alone. Importantly, the resulting potentiation of viral replication suppression was not merely additive, but synergistic, yet no synergistic effect on cytotoxicity was observed,” they continued, adding that these findings are consistent with that of an earlier independent study. [BioRxiv 2020;doi:10.1101/2020.12.13.422511]

“We were delighted with the observed drug synergism,” commented Dr Michael Chan of the School of Public Health at HKU. “We found that adding 3.3 μM simeprevir to 1.1–10 μM remdesivir increased the antiviral effect of remdesivir alone over 100-fold.”

However, the researchers noted several potential limitations to the use of the proposed simeprevir-remdesivir combination. For example, simeprevir requires dose adjustments in patients with Child-Pugh Class B or C cirrhosis, as well as in patients of East Asian ancestry.

“In addition, simeprevir has been taken off the market since 2018 due to the emergence of next-generation HCV protease inhibitors. Hence, its supply may not be ramped up easily,” the researchers wrote. “It is noteworthy that simeprevir is metabolized by the CYP3A4 enzyme with saturable kinetics, while remdesivir itself is not only a substrate of CYP3A4 but also a CYP3A4 inhibitor. Whether such theoretical pharmacokinetic interaction will exacerbate liver toxicity or provide additional pharmacokinetic synergy [in addition to pharmacodynamic synergy] in vivo remains to be tested.” [Janssen, Clinical Pharmacology and Biopharmaceutics Reivew(s) (Application Number 205123Orig1s000), Center for Drug Evaluation and Research]

The researchers also sought to determine simeprevir’s mechanism of inhibiting SARS-CoV-2 replication. Findings of the biochemical assays pointed to the inhibition of two viral enzymatic targets, namely, main protease and RNA-dependent RNA polymerase (RdRp). “Given that simeprevir is originally a non-nucleoside antiviral targeting HCV protease, its inhibition toward RdRp is largely unexpected and represents a novel mechanism of action,” noted the researchers.

“Furthermore, chances of SARS-CoV-2 developing simultaneous mutations in both of these proteins are low, thus lowering the chances of drug resistance,” commented Professor Billy Ng of the School of Pharmacy at CUHK.