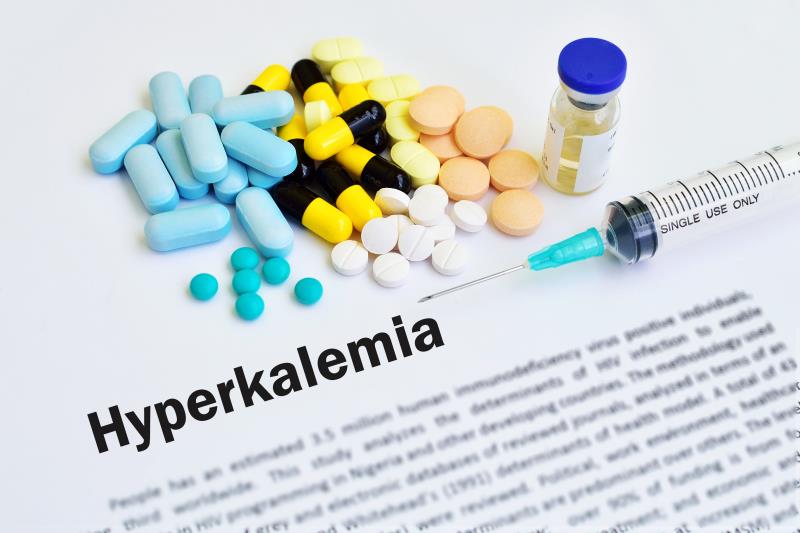 Patients with T2D are prone to hyperkalaemia, particularly when under RAASi* therapy partly due to the concomitant type 4 renal tubular acidosis. [J Am Soc Nephrol 2009;20:251-254] “Hyperkalaemia increases the risk of life-threatening cardiac arrhythmias and death and limits the use of RAASis and MRAs*, which improve clinical outcomes in people with CKD or systolic heart failure (HF),” said the researchers.

A sensitivity analysis also saw a modest reduction in the incidence of mild hyperkalaemia (serum K+ ≥5.5 mmol/L) with the use of SGLT2is (HR, 0.92; pheterogeneity=0.03).

The neutral effect of SGLT2is on hypokalaemia (HR, 1.04; pheterogeneity=0.42) was consistent across a range of characteristics, including the use of diuretics (pheterogeneity≥0.13).

One of the four mechanisms that could explain for the reduced hyperkalaemia risk is the potential of SGLT2is to increase the rate of sodium and water delivery to the distal nephron. [Clin J Am Soc Nephrol 2015;10:1050-1060] “[This is] a key regulator of potassium handling by the kidney. Enhanced sodium re-absorption at the principal cell in the cortical collecting duct increases the electronegative charge in the tubules, which promotes potassium excretion,” the researchers said.

“[T]he reduction in the incidence of hyperkalaemia with SGLT2is may also be attributable to the preservation of kidney function rather than any direct effects on tubular function per se … [or] to an as-yet unrecognized mechanism outside of the kidney,” said the researchers.

Across all trials, 1,754 individuals developed serious hyperkalaemia, and an additional 1,119 investigator-reported hyperkalaemia events were recorded. Median follow up was between 2.4 and 4.2 years.

“[Our] findings have important implications for the care of people with T2D with CKD or HF, given that hyperkalaemia is a major factor limiting the optimal use of RAASis, which form the basis of disease-modifying therapy in these populations,” the researchers noted.

“[Taken together, our results] raise the possibility that SGLT2is could facilitate greater use of RAASis and MRAs [in this patient population], therefore potentially further improving cardiorenal outcomes for people with T2D,” they concluded.

The study’s main strength could be attributed to the use of individual participant data, and of serial centrally measured serum K+ assessments. The former helped ensure consistency in methodology and outcome definitions and allowed for time-to-event analyses, while the latter “provides greater confidence with respect to the robustness of the conclusions”, the researchers explained.

The long follow-up periods and large samples could also account for the increased precision of effect estimates. “[The] inclusion of the largest number of individuals with CKD of any SGLT2i study to date – almost all of whom were treated with RAASis – who are among those at highest risk for serious hyperkalaemia [is another strength],” they added.

Nonetheless, the time period by which SGLT2is reduce hyperkalaemia risk should be investigated, as this could generate added insight into the relative contribution of different mechanisms. The effects of SGLT2 inhibition on incident hyperkalaemia among those without diabetes should also be explored, as “the mechanisms underpinning these benefits are not known and are clearly an important area for future study”, they said.