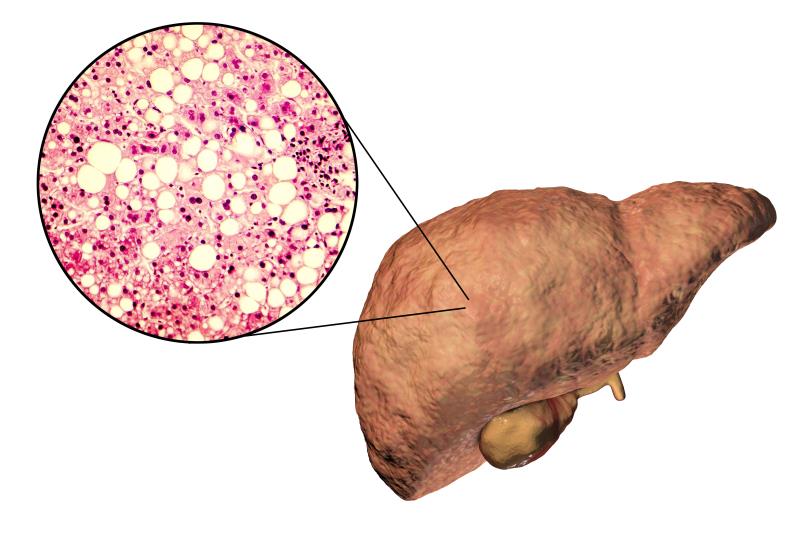 Safety analysis of the phase III MAESTRO-NAFLD-1 trial presented at ILC 2022 demonstrated the potential of resmetirom as a treatment for patients with non-alcoholic steatohepatitis (NASH) who have liver fibrosis.

“Resmetirom was safe and well tolerated at the top dose of 100 mg as well as 80 mg [in this trial],” presented study author Dr Stephen Harrison from the University of Oxford, UK, and Pinnacle Clinical Research, San Antonio, Texas, US.

Participants in this multicentre (79 US sites) trial were 1,143 patients with non-alcoholic fatty liver disease (NAFLD) and metabolic syndrome (≥3 metabolic risk factors), with FibroScan ≥5.5 kPa to ≤8.5 kPa, controlled attenuation parameter (CAP) ≥280 dBm, and ≥8 percent liver fat (as per MRI-PDFF*; mean 17–18 percent). They were randomized in a double-blind fashion to receive oral resmetirom (80 or 100 mg once/day) or placebo (n=972) or open-label resmetirom (100 mg once/day; n=171). The mean age of the patients in the double-blind population was 55.9 years and 54.4 percent were female. Most patients were White (88.6 percent), BMI was a median 35.3 kg/m2, and 49, 76, and 88 percent of patients had type 2 diabetes, hypertension, and dyslipidaemia, respectively.

AEs that occurred more often with resmetirom than placebo were grade 1–2 diarrhoea (23.5, 31.2, and 13.8 percent of patients on resmetirom 80 and 100 mg and placebo, respectively) and nausea (11.9, 18.2, and 7.9 percent, respectively), and mostly occurred in the first few weeks of treatment. Increases in alanine aminotransferase levels ≥3 times the upper limit of normal occurred in 0.61, 0.31, and 1.6 percent of patients, respectively. There were no significant changes in body weight or heart rate.

Less than a quarter of patients (22.5 percent) discontinued treatment, with no between-group difference in discontinuation rate. Most discontinuations were based on patient decision and were due to the COVID-19 pandemic (15.0, 9.8, and 12.2 percent of patients in the resmetirom 80 and 100 mg and placebo groups, respectively). Treatment withdrawal due to AEs occurred in 2.4, 2.8, and 1.3 percent of patients, respectively (21 AE-related withdrawals during the 56-week study period), and were primarily gastrointestinal.

Subgroup analysis at week 52 showed consistent findings with resmetirom 80 or 100 mg pertaining to MRI-PDFF reduction which were significantly greater to that achieved with placebo. Weight change and extent of exposure (high or low) to resmetirom influenced its impact on PDFF reduction, while stable glucagon-like peptide (GLP)-1 agonist therapy had no effect.

“Safety and efficacy [of resmetirom] are in line with expectations from a phase II liver biopsy study and the randomized, parallel, open-label 100 mg arm of MAESTRO-NAFLD-1,” Harrison noted. However, he acknowledged that the early fibrosis stage of this real-world population presented a limitation.

“Positive results from [this trial] support our conviction that resmetirom has the potential to be the first medication approved for treatment of NASH with significant liver fibrosis,” he concluded.