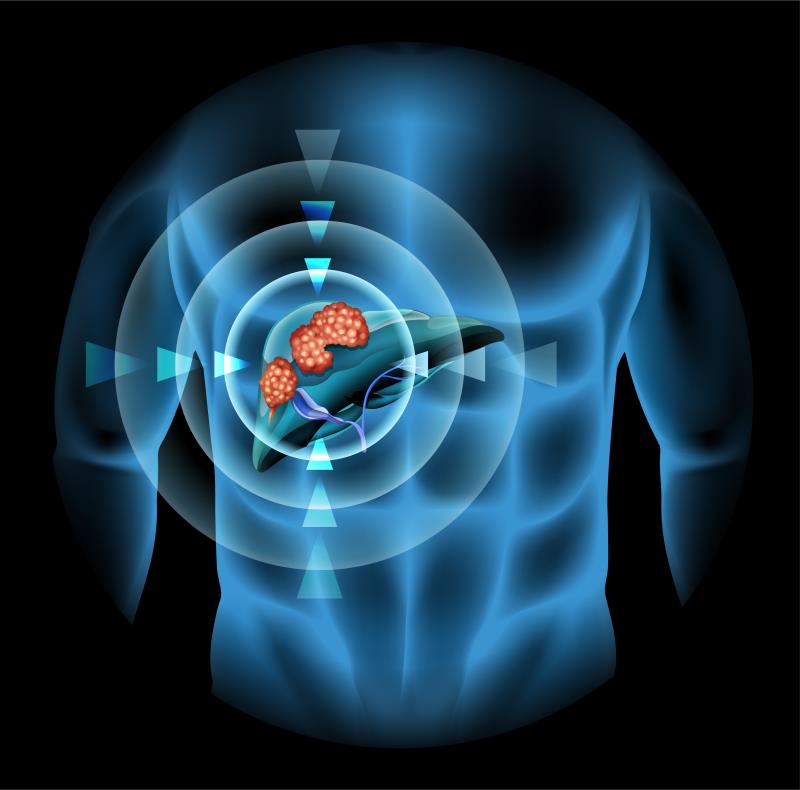 Management of HCC
According to the European Society for Medical Oncology (ESMO) clinical practice guidelines, the management of early and intermediate HCC includes liver resection, ablation, transplantation, and transarterial chemoembolization (TACE). Systemic therapies, such as sorafenib and lenvatinib, are recommended for patients with advanced HCC or intermediate-stage disease not eligible for, or progressing on locoregional therapies. [Ann Oncol 2018;29:iv238-iv255]

Sorafenib, the first systemic therapy to be approved by the US FDA for the treatment of patients with unresectable HCC, was shown to extend median OS over placebo by nearly 3 months. [N Engl J Med 2008;359:378-390] Recently, the FDA approved lenvatinib as a first-line treatment for patients with unresectable HCC. Lenvatinib was non-inferior to sorafenib in terms of survival but had a higher objective response rate (ORR) and prolonged progression-free survival (PFS) and time to progression (TTP). [Lancet 2018;391:1163-1173]

Endpoints in HCC studies
“There is much discussion regarding the best endpoints for HCC studies,” said Sundar. “The endpoint in cancer research is OS. Nonetheless, tumour response rate should be considered an important assessment for treatment efficacy as well. The measurement of response rate in HCC is a controversial issue. The Response Evaluation Criteria in Solid Tumours (RECIST) guideline was proposed as a method for measuring treatment response based on tumour shrinkage. However, this assessment can be difficult to make when applied to molecular-targeted therapies or locoregional therapies in HCC. Hence, the modified RECIST (mRECIST) was developed to take into account tumour necrosis induced by treatment,” he said. [Semin Liver Dis 2010;30:52-60]

When making clinical decisions based on response, the usual methods of comparing responders with non-responders can lead to biased estimates. This bias results in part from the fact that responders must live long enough for response to be observed, but there is no such requirement for non-responders. [J Clin Oncol 2008;26:3913-3915] This lead-time bias can be corrected with the landmark analysis and the multivariate Cox regression models with objective response (OR) as time-dependent covariate. [J Clin Oncol 2008;26:3913-3915; J Clin Oncol 2013;31:2963-2969]

In 2002, TACE was shown in a randomized controlled trial to improve survival of stringently selected patients with unresectable HCC. [Lancet 2002;359:1734-1739] This was supported by a systematic review which showed a median OS of 19.4 months. [Hepatology 2016;64:106-116] A comparison of methods confirmed that response assessment by the mRECIST as well as the European Association for Study of the Liver (EASL) could reliably predict the survival of HCC patients undergoing TACE and could be applicable in practice in preference to the conventional WHO and RECIST criteria. [J Hepatol 2013;58:1181-1187] OR according to both criteria confirms a strong prognostic value in terms of OS, as demonstrated in a meta-analysis on locoregional therapies. [PLoS One 2015;10:e0133488]

While both the initial and the best response predict OS effectively, the achievement of treatment response at an early time point is the most robust predictor for favourable outcomes. [J Hepatol 2015;62:1304-1310] In addition, sustained response duration of ≥6 months is associated with OS and may serve as an early surrogate endpoint. [JAMA Netw Open 2018;1:e183213]

Analyses on systemic targeted therapies also showed that response according to mRECIST is associated with improved survival and should be considered as a valid endpoint for use in HCC clinical trials. [Liver Int 2017;37:1047-1055; Hepatol 2017;66:1166-1172]

OS and tumour response in the REFLECT trial
Based on mRECIST criteria, the REFLECT trial (Study 304) showed that lenvatinib, an oral multikinase inhibitor that targets VEGF receptors 1–3, FGF receptors 1–4, PDGF receptor α, RET, and KIT, conferred a response rate that was higher than that of any other known molecular targeted agents in HCC patients. The phase III non-inferiority trial was a pivotal trial that compared the OS in patients treated with lenvatinib versus sorafenib as first-line treatment for unresectable HCC. Patients were randomly assigned to receive 12 mg/day for bodyweight ≥60 kg or 8 mg/day for bodyweight <60 kg or sorafenib 400 mg twice/day in 28-day cycles. The investigators found that lenvatinib was non-inferior to sorafenib (median survival 13.6 vs 12.3 months, hazard ratio [HR], 0.92, 95 percent confidence interval [CI], 0.79–1.06). [Lancet 2018;391:1163-1173]

A post-hoc analysis showed that the ORR in REFLECT predicts for OS in the overall population. Median OS was 22.4 months among responders and 11.4 months among non-responders (Figure 1). [American Society of Clinical Oncology 2019 Gastrointestinal Cancers Symposium (ASCO GI 2019), abstract 186] 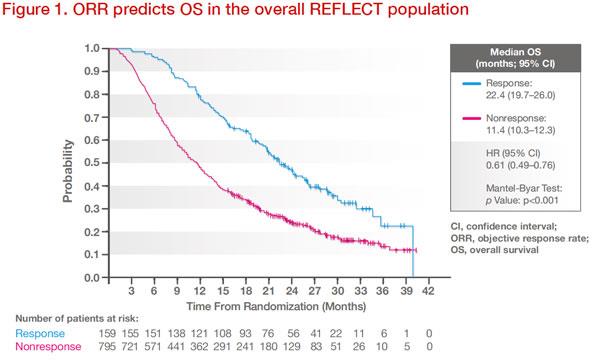 Landmark analyses were performed according to OR status at several fixed time points as sensitivity analyses, and the effect on OS was evaluated by Cox regression with OR as a time-dependent covariate, with other prognostic factors. Results showed that the HRs of the landmark analyses for OS by ORR in the overall population at 2, 4, and 6 months were 0.75, 0.72, and 0.73, respectively. [ASCO GI 2019, abstract 186]

“The treatment paradigm of HCC is expected to shift dramatically in the near future,” said Sundar. “Systemic therapies may now do more than just prolong OS in patients with late stage HCC. Agents such as lenvatinib, which yield high response rates, may also reduce tumour size, potentially facilitating the reintroduction of locoregional therapies, and in turn may improve survival even further. Therefore, systemic therapies with high response rates require clinical trials for consideration in earlier stages of HCC management, either before or in conjunction with locoregional therapy such as TACE,” he said.

Conclusion
In conclusion, increasing data suggest that response rate is associated with better outcomes. Lack of OR, however, does not rule out benefit. OR by mRECIST has been found to be an independent predictor of OS in patients with HCC regardless of treatment in the REFLECT study. The REFLECT study found that lenvatinib is non-inferior to sorafenib in OS, but has a higher response rate. Ongoing prospective studies will provide further insight into these assessment tools.