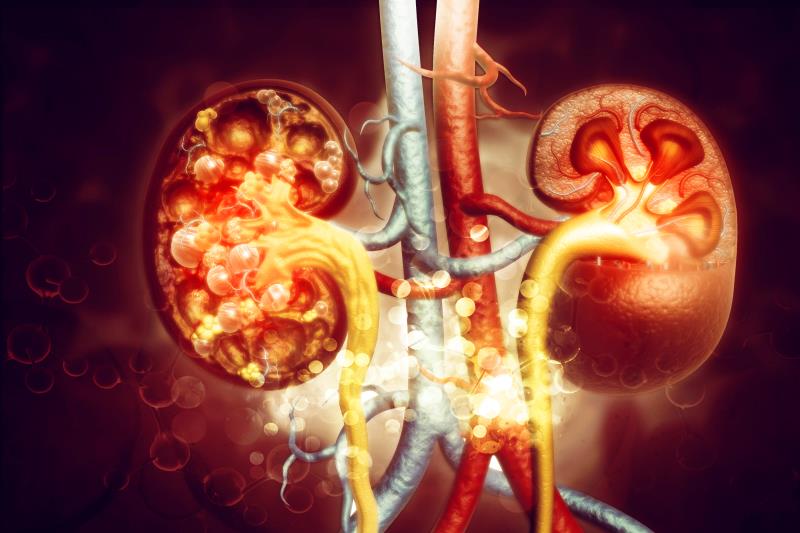 In the treatment of patients with advanced chronic kidney disease (CKD), use of renin-angiotensin system (RAS) inhibitors slows the progression of kidney disease compared with calcium channel blockers (CCBs), although the two drugs offer similar cardiovascular protection, as shown in a study.

“Current clinical guidelines recommend the use of [RAS inhibitors]—angiotensin-converting enzyme (ACE) inhibitors and angiotensin II receptor blockers (ARBs)—as first-line therapy in patients with CKD and proteinuria, with or without diabetes, but provide no guidance regarding estimated glomerular filtration rate (eGFR) thresholds for which these recommendations are valid,” said an international team of researchers. [J Am Coll Cardiol 2018;71:e127-e248; Eur Heart J 2018;39:3021-3104; Kidney Int Suppl 2013;3:1-150; Am J Kidney Dis 2018;72:873-884; Kidney Int 2018;93:1281-1292]

“[It raises] uncertainty regarding the best antihypertensive medications to use in patients with advanced CKD because they are often excluded from clinical trials,” they added.

To fill the knowledge gap, the researchers used data from the Swedish Renal Registry and looked at 2,458 RAS inhibitor users and 2,345 CCB users. These patients (median age 74 years, 38 percent women) had CKD G4–G5 (eGFR <30 mL/min/1.73 m2) but were not on kidney replacement therapy (KRT; defined as initiation of maintenance dialysis or kidney transplantation).

That RAS inhibitors may confer additional renal benefits compared with CCBs in advanced CKD is in line with the results of a recent network meta-analysis of patients with CKD G3, showing that ACE inhibitors reduced the odds of KRT by 35 percent and ARBs reduced the odds of kidney failure by 25 percent compared with other antihypertensive drugs, including CCBs, diuretics, and β-blockers. [Am J Kidney Dis 2016;67:728-741]

The present data, they said, can help inform on the choice of BP-lowering therapy in the advanced CKD population. They recognized that it may be unusual to start RAS inhibitor or CCB therapy late in the course of disease and that there may be special indications for it.

“Although we acknowledge that we do not have the precise reasons that prompted the use of these therapies [in the study], we went through a great deal of effort to identify and control for these potential indications,” they said.