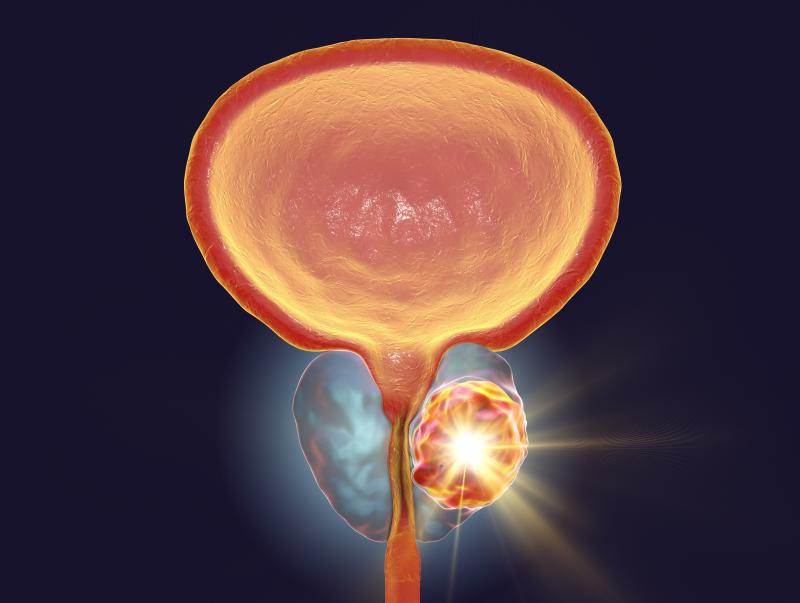 A total of 2,061 patients (median age 68 years, 40 percent oligometastatic) were randomized 1:1 to receive SoC either alone or with RT at a dosing schedule of 55 Gy/20 fractions/4 weeks or 36 Gy/six fractions/6 weeks. Follow-up was every 6 weeks to 6 months, then every 12 weeks to 2 years, every 6 months to 5 years, and annually thereafter.

Despite the lack of survival advantage in the overall cohort, there was an improved 3-year failure-free survival rate with SoC + RT vs SoC alone (32 percent vs 23 percent, HR 0.76; p<0.0001).

Moreover, subgroup analyses revealed an improved 3-year OS rate among oligometastatic PCa patients who received RT vs those who did not (81 percent vs 73 percent, HR, 0.68; p=0.007).

The subgroup finding underscores the potential of RT as a treatment alternative for metastatic PCa, which is often addressed by systemic treatment*** alone, noted the researchers. [Eur Urol 2017;71:630-642] “Although outcomes have improved, men still typically die from metastatic PCa within around 5 years [hence the] need for a more effective treatment,” said Parker.

“Prostate RT, in addition to drug treatment, should now be a standard treatment option for men with oligometastatic disease … [Moreover,] … RT does not require regulatory approval and is readily available at [a] modest cost in most parts of the world,” added Parker and his colleagues.

The finding also suggests that RT might confer the same benefits for men with pelvic node-positive PCa (Tany N1 M0), the researchers pointed out. “This is important because it is not feasible to do randomized trials specifically in men with non-metastatic node-positive PCa and because such men often receive systemic treatment alone.”

The researchers plan to continue follow up given the short median follow up as opposed to the median survival time (37 vs 46 months). “[T]his could be particularly relevant to the analysis of SLEs, which can occur late and after disease progression.”

While the findings seem “practice changing” for a subset of PCa patients, the lack of improvement in those with a high metastatic burden merits further investigation to determine whether RT could benefit such patients to prevent SLEs, said the researchers. “[Further investigation could help determine] whether upfront local treatment improves or prevents local symptoms which, by itself, may justify its use in the absence of an OS benefit,” said Prof Karim Fizazi from the Gustave Roussy Institute, University of Paris Sud in Orsay, France, in a press release.

Further trials may also shed light on the lack of between-group difference in SLEs, which suggests that RT might not add much local control benefit beyond androgen deprivation therapy (ADT) with the dosage used, commented Drs Luca Boeri, Vidit Sharma, and R Jeffrey Karnes from the Mayo Clinic in Rochester, Minnesota, US, in an editorial. “[This is] a counterintuitive finding,” they said. [Lancet 2018;doi:10.1016/S0140-6736(18)32598-4]

Given the lower radiation dose used compared with the standard dose for high-risk localized PCa (≥70 Gy), [J Natl Compr Canc Netw 2018;16:620-623] the editorialists added that dose-optimization should also be explored further to determine the optimum dosing technique and schedule, and establish a balance between local and oncological control and quality of life in the metastatic setting.