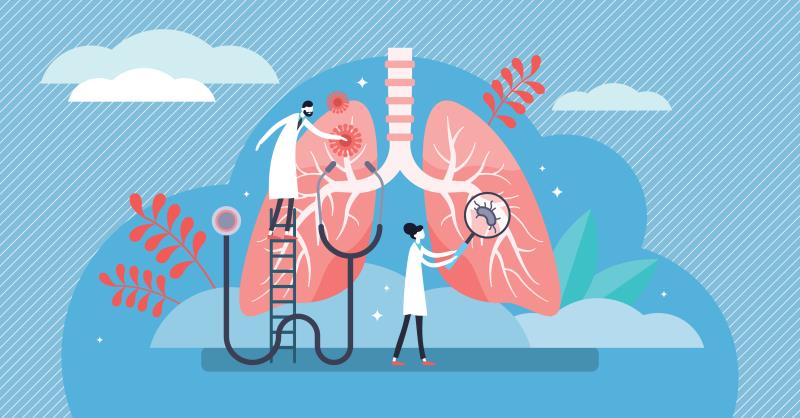 Prophylactic use of azithromycin was associated with significantly fewer infections and hospitalizations in patients with asthma, according to real-world data presented during the CHEST 2021 Congress.

“The British Thoracic Society guidelines recommend long-term macrolides use in adult asthmatics to reduce exacerbation rate,” said presenting author Hanan Ajay, a medical student at the University of Liverpool, Liverpool, UK, who pointed out that the macrolide of choice in the UK is azithromycin.

The observational study included 34 adult patients with asthma (median age 58 years, 25 were female) who initiated prophylactic azithromycin at a dose of 250 mg, thrice a week, for a mean duration of 40 months. Of the participants, 17 were never-smokers while eight were current smokers, and nine were ex-smokers. [CHEST 2021;doi:10.1016/j.chest.2021.07.083]

The clinical benefits of prophylactic azithromycin showed as early as within the first 12 months of starting azithromycin: both the rates of infections (p<0.001) and hospitalizations (p<0.034) were significantly reduced from baseline compared with pretreatment period.

There were no significant changes in lung function as measured by FEV1:FVC* ratio after starting azithromycin.

“Long-term prophylactic azithromycin has been shown to correlate with a significant reduction the number of infections and hospitalizations in asthmatic patients,” said Ajay who noted that their current findings were consistent with expectation.

“Our study did not show any lung function improvements with azithromycin use and the adverse effect hearing loss similar to previous studies of 5 percent,” he reported.

Hearing impairment attributed to azithromycin exclusively occurred in about 5.8 percent of the patients. Treatment discontinuation occurred in 13 patients — of which seven were due to ineffectiveness and four were due to side effects. The side effects leading to discontinuation included gastrointestinal problems (2/13) and hearing issues (2/13), while the remaining two were for other reasons not documented.

In addition, five out of the 34 patients experienced prolonged QTc after initiating azithromycin, which is a known side effect associated azithromycin.

“Azithromycin is a safe and effective prophylactic drug in reducing exacerbations in this cohort of asthma patients. Our real-world experience is in keeping with studies done so far,” Ajay concluded.