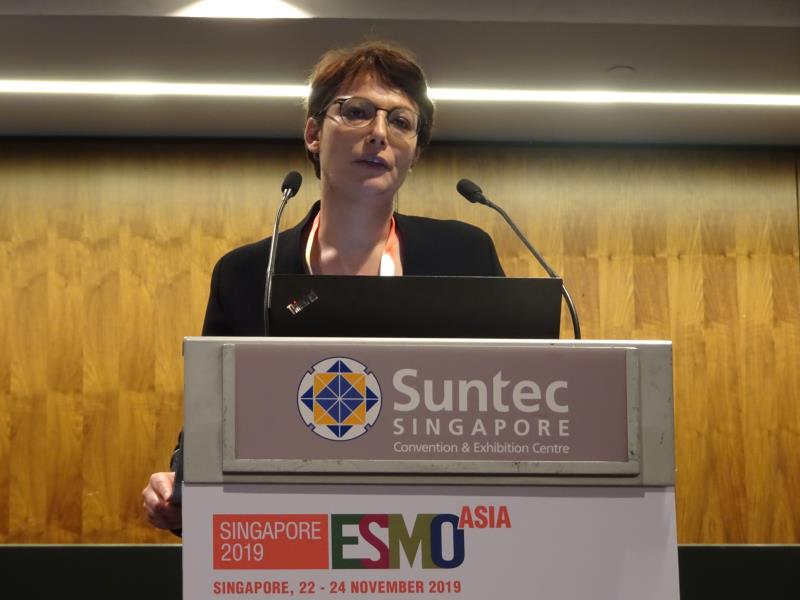 PROfound not only proved the efficacy  of olaparib but also offered a new concept that prostate cancer can be treated with targeted therapy.

“The benefits were seen in patients with BRCA1, BRCA2, or ATM alterations, as well as in the overall population of patients with alterations in any qualifying gene (BARD1, BRIP1, CDK12, CHEK1, CHEK2, FANCL, PALB2, PPP2R2A, RAD51B, RAD51C, RAD51D, or RAD54L) involved in the homologous recombination repair (HRR) pathway,” said Dr Shahneen Sandhu, consultant medical oncologist at the Peter MacCallum Cancer Centre in Melbourne, Australia who presented the study findings at ESMO Asia 2019 in Singapore.

The primary endpoint of median rPFS by blinded independent central review in cohort A was 7.4  months with olaparib vs 3.6 months with enzalutamide/abiraterone (hazard ratio [HR], 0.34, 95 percent confidence interval (CI), 0.25 –0.47; p<0.0001). At 6 months, 60 percent of olaparib patients were progression-free vs 23 percent of those on enzalutamide or abiraterone, and this fell to 28 percent and 9.4 percent, respectively, at 12 months. This significant benefit was seen across all subgroups, whether the patients were stratified by previous taxane use, measurable disease at baseline, site of metastases, baseline performance status, age at randomization, geographic location, and baseline prostate-specific antigen levels. [ESMO Asia 2019, abstract LBA8]

Aside from rPFS, olaparib delayed cancer progression by about 4 months vs the new hormonal therapy enzalutamide or abiraterone. The performance of olaparib was also supported by an objective response rate (ORR) of 33.3 percent in cohort A vs only 2.3 percent with NHA, at an odds ratio of 20.86 (p<.0001). Time to pain progression (TTPP), also a key secondary endpoint, was significantly longer in cohort A with olaparib at a median that was not reached vs 9.9 months for NHA (HR, 0.44; p=0.0192].

“Some patients with mCRPC have deleterious alterations in a variety of genes, with up to 30 percent of tumours having deletions in DNA damage repair genes,” said Sandhu. “ Some of these mutations can confer sensitivity to PARP inhibition, so the intent of PROfound was to target those genes to prevent the cancer from repairing itself.”

Using an investigational assay developed in conjunction with Foundation Medicine, she and her team tested prostate tumour tissues. Men with mCRPC were then divided into two cohorts based on HRR gene mutation status -- cohort A (n=245 with BRCA1, BRCA2, or ATM gene alterations) and cohort B (n=142 with any of the remaining 12 alterations). Both cohorts were randomized in a 2:1 fashion to receive olaparib 300 mg twice daily or physicians’ choice of either enzalutamide or abiraterone. Patients on enzalutamide or abiraterone who progressed were allowed to crossover to olaparib.

“These are patients who progressed despite previous treatment with abiraterone or enzalutamide and/or taxane chemotherapy,” said Sandhu. “In this population, olaparib was well-tolerated, with a safety profile generally consistent with that seen for other malignancies.”

“Patients with prostate cancer should now undergo genetic testing of tumour tissue to identify those 30 percent of patients who can benefit from PARP inhibition with olaparib,” concluded Sandhu.

The results of PROfound were first presented at ESMO 2019 in Barcelona, Spain. Discussant for PROfound Dr Eleni Efstathiou, a medical oncologist at MD Anderson Cancer Center in Houston, Texas, US, then said: “it was a landmark trial, but we need to wait for the final analysis.”