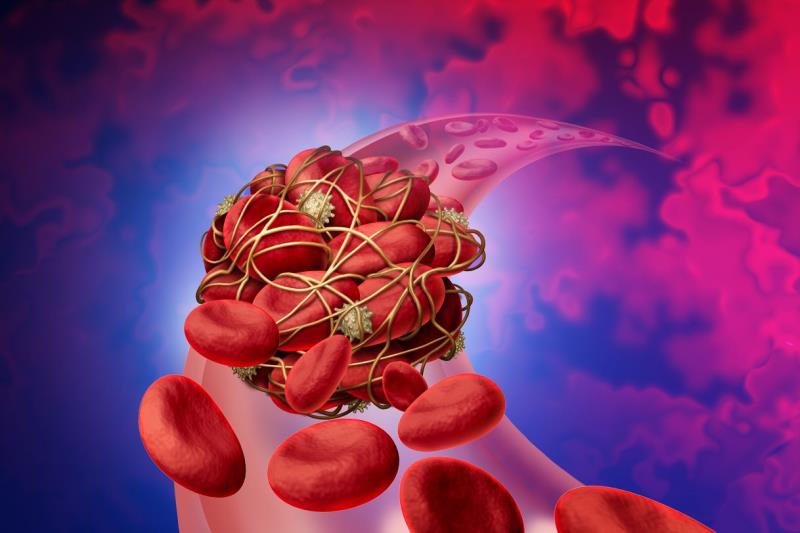 Venous thromboembolism (VTE) is a serious medical condition. It comprises deep vein thrombosis and pulmonary embolism. Left untreated, it could result in significant morbidity and mortality. Most patients with VTE receive anticoagulation therapy for 3 months or longer. For more than 50 years since the 1940s, vitamin K antagonists (VKAs) such as warfarin were the mainstay of oral anticoagulation therapy for VTE. As it has a narrow therapeutic index, VKAs require frequent coagulation monitoring with International Normalised Ratio (INR) to adjust and optimize the dose for each individual. As the peak effect for warfarin takes at least 4-5 days, in the initial stage of VTE, concurrent administration of daily subcutaneous injections of low molecular weight heparin (LMWH) is needed until INR reaches therapeutic levels. Due to numerous drug and dietary interactions with warfarin, regular INR monitoring is required to ensure therapeutic levels are maintained and to avoid under or overdosing.

What are the different NOACs available in Singapore?
In the past 10 years, the advent of a new class of drugs – the non-vitamin K anticoagulants (NOACs) – has revolutionized VTE treatment. The NOACs have several advantages over VKAs. These include rapid onset of action, high oral bioavailability, limited drug and diet interactions, and fixed dosing. Routine coagulation monitoring with INR is not required. The first oral NOAC introduced was the direct thrombin inhibitor dabigatran which was made available to the US market in 2010. Subsequently in the ensuing 5 years or so, three other drugs targeting factor Xa (anti-Xa inhibitors) were progressively introduced – rivaroxaban, apixaban, and edoxaban.

Unlike VKAs, NOACs have more predictable pharmacokinetic-pharmacodynamic properties. Hence, the doses are fixed and there is no need for periodic monitoring of coagulation tests. Thus, it is much more convenient and facilitates outpatient management which is particularly important during this COVID-19 pandemic when healthcare resources are stretched. However, there remains a role for LMWH and VKAs in selected patients who cannot be prescribed NOACs. Currently, NOACs are contraindicated in pregnancy, breastfeeding mothers, patients with prosthetic heart valves, and those with anti-phospholipid syndrome.

How to choose from the various NOACs?
For dabigatran and edoxaban, initial treatment for acute VTE requires 5 days of daily LMWH injections before converting to an oral drug. In contrast, for apixaban and rivaroxaban, oral therapy can be initiated immediately without the need to overlap with daily LMWH injections as the therapeutic effect can be rapidly achieved within hours. As NOACs have a wide therapeutic window, the chances of bleeding complications with these drugs are exponentially reduced compared with VKAs such as warfarin.

In terms of the administration of NOACs, there are some differences for each drug. Rivaroxaban should be administered with food to enhance its absorption, while apixaban and edoxaban can be taken without regard to meals. Dabigatran does not need to be administered with food. Up to 10 percent of patients starting dabigatran can experience dyspepsia – taking it with meals for a few days can reduce this issue which will improve on its own subsequently. Dabigatran capsule should not be removed from its packaging until it is ready to be consumed as there is a potential for breakdown if it is exposed to moisture. For the anti-Xa inhibitors apixaban, edoxaban, and rivaroxaban, this is not an issue.

Although regular coagulation monitoring for dose adjustments is not required with NOACs, routine monitoring of renal and hepatic function, signs/symptoms of bleeding, and parameters of compliance should be evaluated periodically for all patients. Checking blood counts would also be helpful as a drop in haemoglobin may suggest the possibility of occult bleeding. In the event of any acute medical illness, patients should also be re-evaluated for any change in status such as deterioration of renal function.

Impact of age and renal function in selecting NOACs
While anticoagulant therapy is very effective at preventing recurrent VTE, it is associated with an increased risk of bleeding complications. For patients on VKAs, major bleeding events may occur in ~1–3 percent of patients each year. In comparison, use of NOACs is associated with approximately 30 percent lower relative risk for major bleeding. [Blood 2019;133:425-435]

A meta-analysis by Geldhof et al [Thrombosis J 2014;12:21] evaluated data from phase III randomized controlled trials that compared the four NOACs with VKA therapy for the initial treatment of VTE in the elderly (>75 years) and the renally impaired. The meta-analysis included four major studies, namely AMPLIFY*, EINSTEIN DVT and PE, HOKUSAI**, and RE-COVER I and II. The evidence suggested NOACs offer better overall safety and efficacy profiles in elderly patients and comparable safety and efficacy profiles in patients with moderate renal impairment (Figure 1). 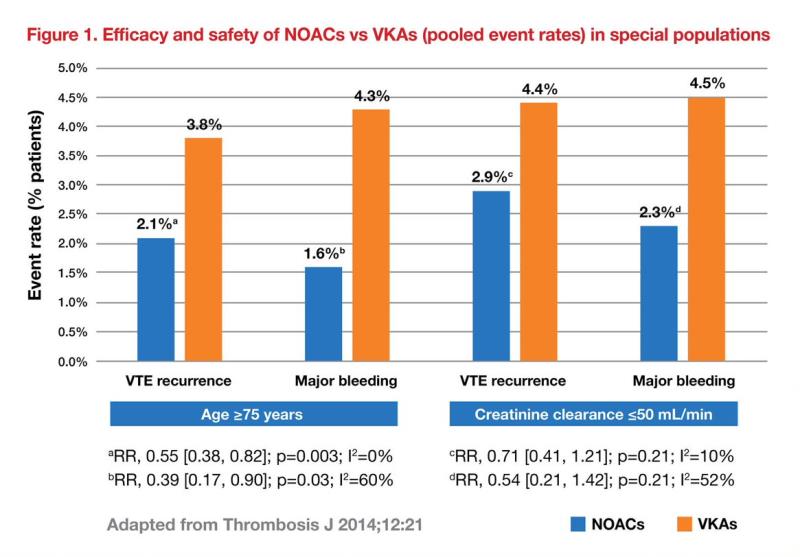 All NOAC therapies are eliminated by the kidneys to varying degrees (J Am Heart Assoc 2020;9:e017559;doi: 10.1161/JAHA.120.017559). Of the four, dabigatran is the most renally eliminated, accountable for 80 percent of its clearance pathway. This is followed by edoxaban, rivaroxaban, and apixaban at 50 percent, 35 percent, and 27 percent, respectively.

NOACs are generally safe and effective in patients with moderate CKD (creatinine clearance [CrCl] 30–50 mL/min). Dose adjustments (a decreased dose or decreased frequency) should be considered in the presence of renal impairment. As apixaban undergoes the least amount of renal elimination, it may be the NOAC of choice where CrCl is between 15–30 mL/min. In patients whose renal function is severely impaired (CrCl <15 mL/min), NOACs should be avoided.

NOACs in the treatment of cancer-associated thrombosis
Patients with cancer are four to seven times more likely to develop VTE than patients without cancer. Treating established VTE in cancer patients is challenging as higher rates of VTE recurrence are often encountered in addition to a higher risk of bleeding complications than patients without cancer. In a real-world analysis from September 2018 to January 2020, LMWH was the most common initial anticoagulation treatment for VTE in patients with cancer [Curr Opin Oncol 2020;32:289-294). However, in recent years, NOACs have gained favour. The 2021 update to the CHEST guidelines recommends an oral Xa inhibitor (apixaban, edoxaban, rivaroxaban) over LMWH for the initiation and treatment phases of therapy in patients with acute VTE in the setting of cancer. [Chest 2021;160:2247-2259] As edoxaban and rivaroxaban appear to be associated with a higher risk of gastrointestinal major bleeding than LMWH in patients with cancer-associated thrombosis and a luminal gastrointestinal malignancy, apixaban or LMWH may be the preferred option in such patients.

Conclusion
The availability of NOACs in the past 10 years has led to a paradigm shift in VTE prophylaxis and treatment. The number of NOAC prescriptions is increasing worldwide and NOACs have overtaken VKAs as the major treatment prescribed to new patients requiring oral anticoagulants. International guidelines, including the American Society of Hematology, now suggest using NOACs, rather than VKAs, for VTE therapy in most patients. [Blood Adv 2020;4:4693-4738] In choosing the most appropriate anticoagulant, we should bear in mind patient comorbidities such as age, renal function, and quality-of-life considerations. The patient’s preferences, as well as drug cost-effectiveness, is also critical. Currently, the cost of NOACs is significantly higher than VKAs, thus for patients requiring long-term anticoagulation, this would be an important consideration.

*AMPLIFY: Apixaban for the Initial Management of Pulmonary Embolism and Deep-Vein Thrombosis as First-Line Therapy
**HOKUSAI: Edoxaban versus Warfarin for the Treatment of Symptomatic Venous Thromboembolism