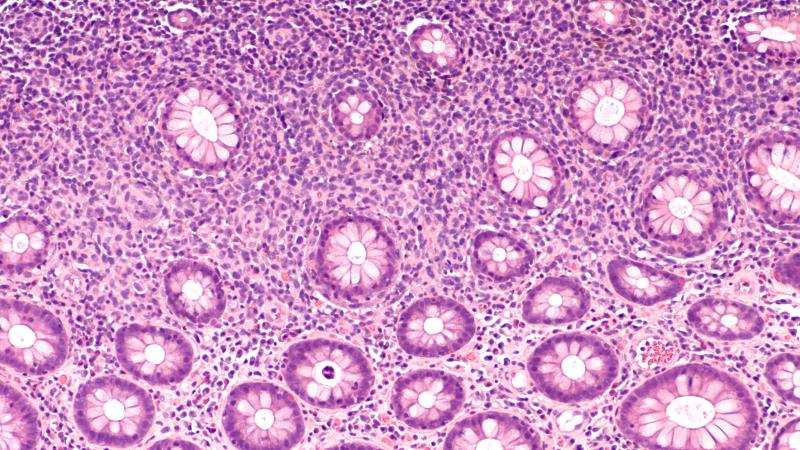 The combination of polatuzumab vedotin with rituximab, cyclophosphamide, doxorubicin, and prednisone (pola-R-CHP) demonstrated a significant improvement in progression-free survival (PFS) over the standard-of-care (SoC) regimen of rituximab, cyclophosphamide, doxorubicin, vincristine, and prednisone (R-CHOP) in patients with previously untreated diffuse large B-cell lymphoma (DLBCL), according to results of the phase III POLARIX study.

“This study shows that R-CHP in combination with polatuzumab vedotin significantly improves PFS rates for patients with DLBCL and results in a sizable reduction in the relapse risk after successful treatment completion, avoiding the use of salvage therapies that are often unsuccessful and associated with significant toxicity burden,” said study author Dr Gilles Salles, Chief of the Lymphoma Service, Memorial Sloan Kettering Cancer Center, New York City, New York, US, who presented the results at ASH 2021.

Participants in this international (23 countries), double-blind, placebo-controlled study were 879 patients aged 18–80 years (median age 65 years) with previously untreated intermediate- or high-risk CD20-positive DLBCL, ECOG performance status score 0–2, and an International Prognostic Index score of 2–5. They were randomized 1:1 to receive pola-R-CHP* or R-CHOP* for six 21-day cycles plus two additional cycles of rituximab. The patients were followed up for a median 28.2 months.

At treatment end, positron emission tomography-computed tomography (PET-CT) determined complete response rate, as per independent review committee, did not significantly differ between patients in the pola-R-CHP vs R-CHOP arm (78.0 percent vs 74.0 percent; p=0.16).

Twenty-three and 30 percent of patients in the pola-R-CHP vs R-CHOP arms, respectively, had received anti-lymphoma therapy at data cut-off. Patients in the pola-R-CHP arm were less likely to receive subsequent therapies compared with those in the R-CHOP arm, specifically radiotherapy (9.3 percent vs 13.0 percent), stem cell transplantation (3.9 percent vs 7.1 percent), and chimeric antigen receptor T-cell therapy (2.0 percent vs 3.6 percent).

The most common grade 3–4 AEs in the pola-R-CHP vs R-CHOP arms were neutropenia (28.3 percent vs 30.8 percent), febrile neutropenia (13.8 percent vs 8.0 percent), and anaemia (12.0 percent vs 8.4 percent). Any-grade peripheral neuropathy occurred in 52.9 and 53.9 percent of patients in the pola-R-CHP and R-CHOP arms, respectively, while grade 3–4 peripheral neuropathy occurred in 1.6 and 1.1 percent, respectively.

“No new safety signals were detected, and the safety profile of pola-R-CHP was consistent with the known safety profiles of the individual drugs,” said the authors.

“It is quite satisfying that we were able to improve outcomes without significantly impairing patients’ quality of life,” noted Salles.

Pola-R-CHP: The first regimen to show PFS improvement over SoC

The current SoC for newly diagnosed DLBCL is R-CHOP. Although the regimen induces a high cure rate (60–70 percent of patients), about 40 percent may have refractory disease or relapse following treatment, said the authors.

“Over the last two decades, there have been multiple attempts – albeit unsuccessful – to improve the cure rate of this disease either through modified dose, schedule of R-CHOP, or by adding targeted agents to this regimen,” said Salles.

“With this disease, it can be difficult to achieve a cure in some patients with more extensive disease or older age,” he added, highlighting that better therapies are warranted for high-risk patients. “Despite the fact that a high percentage respond initially to R-CHOP, many ultimately relapse after therapy is completed.”

“I think this could be a practice-changing result. This is the first randomized phase III study that has shown a benefit in patients with first-line DLBCL. It shows that it is possible to significantly reduce disease progression, including in patients with difficult-to-treat subtypes,” he continued.

The authors pointed out that variation in the PFS results in certain subgroups highlights the need for further study into the effects of pola-R-CHP.

Longer follow-up is also necessary to determine the longevity of the results, they said.