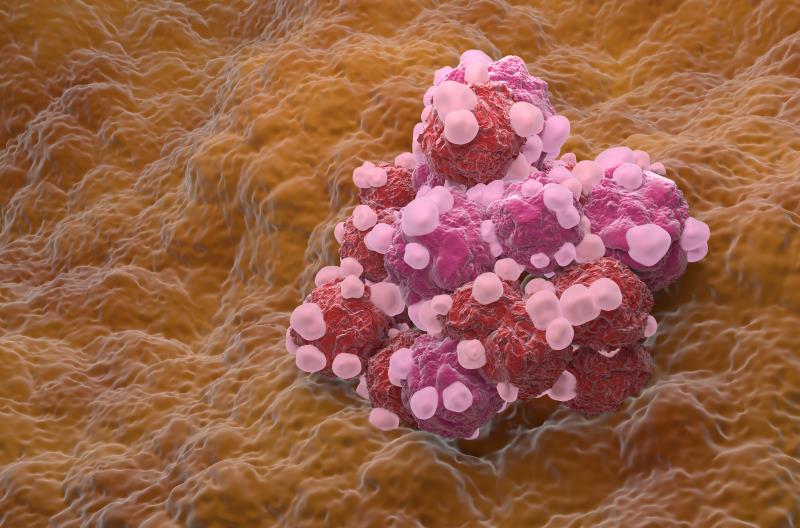 The primary treatment alternative for PROC is monotherapy with PLD, docetaxel, paclitaxel, or topotecan; however, it is tied with short survival. [Lancet 2009;374:1371-1382] “[As such,] there are substantial unmet therapeutic needs in patients with PROC, and novel therapeutic strategies should be explored,” said the researchers.

The study comprised 152 women (median age 55 years) with histologically confirmed epithelial ovarian, primary peritoneal, or fallopian tube cancer who had experienced disease progression during or within 6 months of discontinuing any prior line of platinum-based chemotherapy (CT). Participants were randomized 1:1 to receive IV PLD 40 mg/m2 Q4W (up to six cycles) either alone or with oral apatinib 250 mg QD. They were followed for a median 8.7 months. [JAMA Oncol 2022;8:1169-1176]

The PFS benefit with PLD-apatinib was consistent across subgroups, including women without previous platinum-sensitive relapse (HR, 0.35), those with a PFI** of ≤3 months (HR, 0.20), platinum-refractory patients (HR, 0.16), and multiple platinum-resistant relapses (HR, 0.37). “These subsets of patients have a worse prognosis, with very limited systemic therapeutic options, and are often excluded (or only a small proportion are included) in other randomized trials,” the researchers noted.

More patients on PLD-apatinib achieved an unconfirmed objective response (43 percent vs 11 percent) and disease control rate (82 percent vs 53 percent) compared with those on PLD alone. A similar trend was seen among those with measurable lesions and underwent at least one post-baseline imaging evaluation (88 percent vs 39 percent).

Serious AEs occurred in 12 percent of PLD-apatinib recipients, the most common being incomplete bowel obstruction and intestinal fistula (3 percent for each event). Only three patients on PLD-apatinib discontinued treatment owing to AEs. There were no deaths due to AEs.

The most common grade ≥3 non-haematological AEs reported with apatinib were hand-foot syndrome, hypertension, and proteinuria (26, 18, and 15 percent, respectively). Nonetheless, these rates were lower than that seen in other trials which, according to the researchers, could have been driven by the low-dose administration of apatinib. Also, these events are reportedly tied to better antitumour efficacy in patients with advanced solid tumours receiving VEGF*** TKIs. [Br J Cancer 2015;113:1571-1580; J Clin Oncol 2007;25:2993-2995; J Clin Oncol 2016;34:3823]

A novel treatment option for PROC?

While the findings correlate with those seen with bevacizumab-PLD, apatinib appears to have an edge over bevacizumab. [J Clin Oncol 2014;32:1302-1308] “[B]evacizumab is administered by IV infusion, whereas apatinib is received orally, which allows for timely dose adjustments and is much more convenient for patients. In addition, as a small molecular TKI, the mechanism of apatinib is not identical to that of bevacizumab,” the researchers noted.

“[Overall,] PLD-apatinib showed promising efficacy and manageable toxic effects in patients with PROC,” said the researchers. “[PLD-apatinib] may be a new ... treatment option in this setting.”

Longer follow-up is warranted to validate the OS events. The effect of this combination regimen should also be evaluated in other populations, as the cohort was limited to Chinese patients.