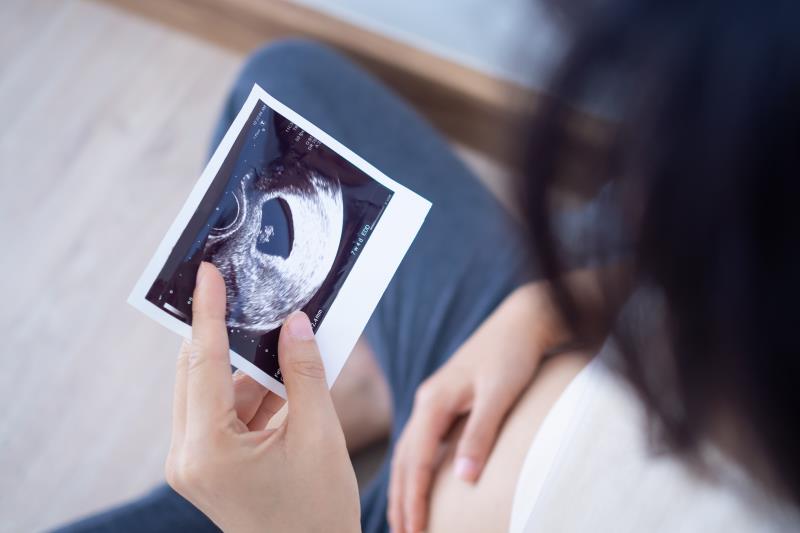 Evaluating plasma kisspeptin levels, particularly during later gestational weeks of the first trimester of pregnancy, helps pinpoint women at risk of miscarriage, as shown in a study said to be the largest of its kind.

“Kisspeptin has high diagnostic accuracy for the identification of miscarriage throughout the first trimester,” unlike the most widely used pregnancy biomarker—beta human chorionic gonadotropin (βhCG)—whose predictive accuracy declines after 8 weeks of gestation, when 4–5 percent of miscarriages occur, according to the investigators. [Birth Defects Res A Clin Mol Teratol 2012;94:417-423]

In the study, the investigators looked at a cohort of 1,045 women presenting with an intrauterine pregnancy (IUP), all of whom underwent serial ultrasound scans and blood sampling for measurement of plasma kisspeptin and βhCG levels during the first trimester.

A total of 95 women had miscarriages (173 samples), and 265 of those with healthy pregnancies (557 plasma samples) were randomly selected to comprise the control group. There were no significant between-group differences in terms of maternal age (median 34 vs 32 years), body mass index (BMI; median 24.3 vs 23 kg/m2), or number of previous miscarriages (one: 27.4 percent vs 28.3 percent; two or more: 24.2 percent vs 22.6 percent).

In a multivariable logistic regression model, the likelihood of pregnancy loss shrunk by 35 percent for every 100-pmol/L increase in plasma kisspeptin during the first trimester (odds ratio [OR], 0.649, 95 percent confidence interval [CI], 0.616–0.683; p<0.0001). This model had 75.9-percent accuracy as a predictor, with the association between plasma kisspeptin and miscarriage risk persisting despite adjustments for gestational age, maternal age, paternal age, ethnicity, smoking status, and BMI.

Alone, plasma kisspeptin proved to be a promising biomarker for miscarriage, with the corresponding area under the receiver-operating characteristic curve (AUC) for identifying pregnancy loss during the first trimester of 0.874 (95 percent CI, 0.844–0.904). In contrast, βhCG had an AUC of 0.859 (95 percent CI, 0.820–0.899).

A family of peptides encoded by the KISS1 gene that bind to the G protein–coupled “kisspeptin receptor,” kisspeptins have been implicated in several facets of reproduction, including puberty, ovulation, and placentation. The peptides are expressed in the placenta throughout pregnancy, with the expression especially high during the first trimester, which coincides with the time of placentation. Placentas from women with recurrent pregnancy loss exhibit markedly lower KISS1 peptide levels in their syncytiotrophoblasts than women with healthy pregnancies. [Nature 2001;411:613-617; Cell Physiol Biochem 2018;49:1259-1276; J Endocrinol 2012;214:79-85; J Cell Sci 2004;117:1319-1328; Pathol Res Pract 2014;210:47-54]

Evidence also points to kisspeptin having a role in immune modulation, such that low levels “could hypothetically be associated with reduced maternal immune tolerance and thus an increased risk of miscarriage,” the investigators said. [N Engl J Med 2012;367:1159-1161; Biochem Suppl Ser A Membr Cell Biol 2016; 10:180-187]

“Thus, it is … possible that kisspeptin could be a biomarker of placental function rather than having a crucial active role in the pathophysiology of miscarriage,” according to the investigators.

But the good news is that miscarriage, while often inevitable, “may be amenable to therapy in some instances,” they said, citing evidence from a recent trial suggesting that women at highest risk of pregnancy loss benefited from progesterone supplementation. [N Engl J Med 2019;380:1815-1824]

“It is plausible that pregnancy biomarkers that identify women at increased risk for miscarriage early in the process could help target interventions to a cohort of women who might benefit. However, even in the absence of a readily available therapy, being able to identify the risk of miscarriage is additionally important to allow couples to prepare psychologically for this eventuality and to allocate resources to those at most risk,” the investigators pointed out.