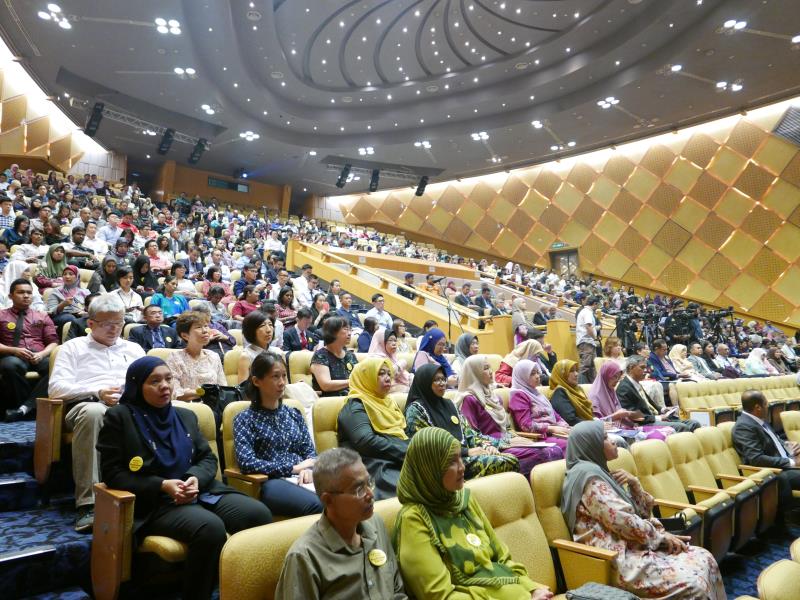 Pharmacists in attendance at a town hall organized by the Ministry of Health, Malaysia.

On 8 August, the first town hall held by the Ministry of Health (MOH) with members of the pharmacy profession took place in Putrajaya. Over 500 pharmacists from across the country and from different areas of practice—community and hospital, public and private, academy and industry—converged to fill the auditorium for the chance to engage in direct dialogue with MOH.

In an opening speech, Dzulkefly acknowledged that a wide range of suggestions and recommendations on policy, regulation, human resource, and capacity-building, received by the MOH from pharmacists had led to the focused discourse of the town hall.

“As experts in drugs and matters related to drugs, you represent an important group of healthcare professionals in the country; you are well positioned to contribute much to the health and well-being of the nation,” said Dzulkefly. “We would like to assure you that your voice and opinions in further advancing our healthcare services will be looked into seriously by the MOH.” 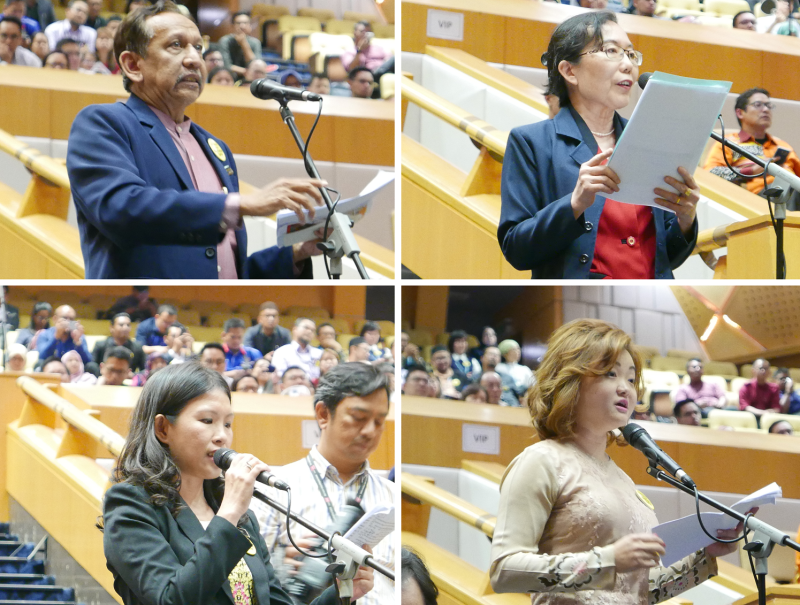 The town hall was livestreamed via Facebook Live on both the MPS and the MOH’s Facebook pages. The recorded video with the panellists’ responses remains available for public viewing currently. 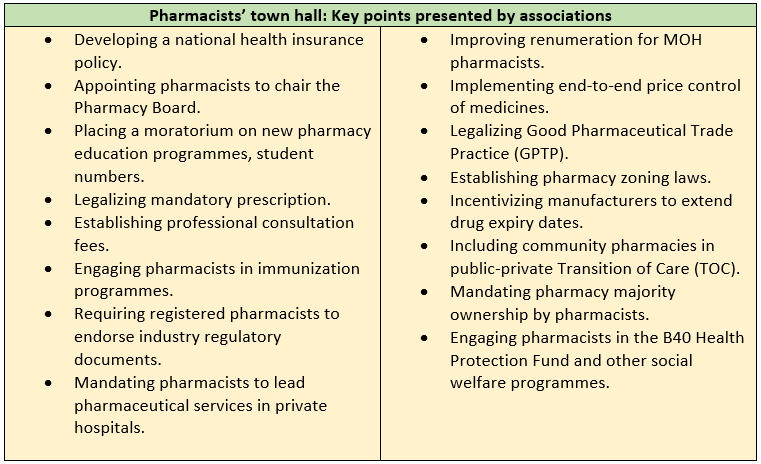 Major reforms such as dispensing separation and public-private transition of care (TOC) can only be fulfilled with the support of a single national health financing scheme, said the Health Minister.

“The thrust of reform essentially will be driven by a national health financing system. We can no longer go on with a predominantly tax-based system. That served us well, but it is no longer sustainable,” said Dzulkefly. “A national health trust fund would enable coverage of both the public and private sector. In that scenario, I believe you would have [policies such as] dispensing separation in place … as well as other things like strategic purchasing, pooled procurement and public-private care collaborations.”

He added that a national health financing system would have to be implemented together with a restructuring and corporatization of the MOH to improve efficiency in the longer term. 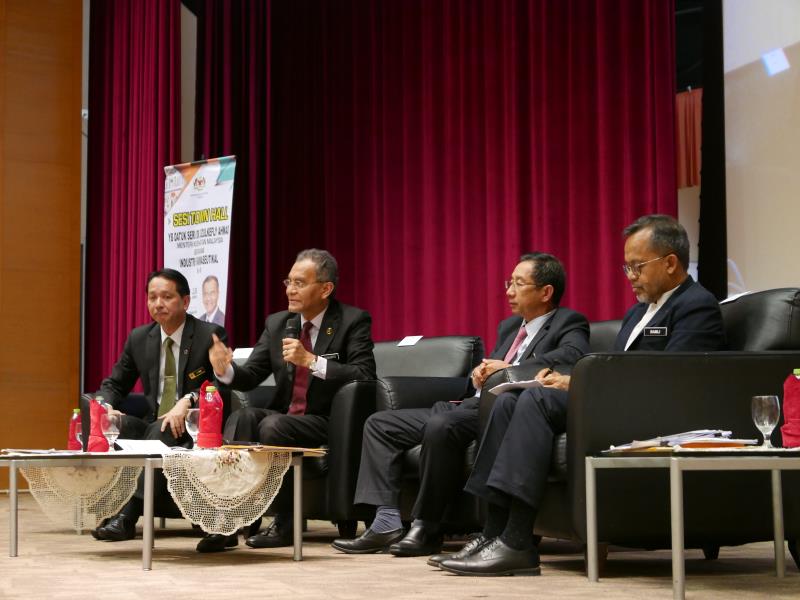 Addressing the request for a moratorium on new pharmacy programmes, Ramli said that a new proposal had been submitted in April 2019 and is currently under review by the Pharmacy Board with the aid of the deans of relevant universities.

Ramli noted that similar proposals had been submitted in 2011 and 2016, but turned down by the Ministry of Higher Education, on the grounds that data projections still showed a need for more pharmacists to cater to national population numbers.

“The issue is more [about the fact] that government posts are almost filled up … so there is a sense of an overwhelming number of pharmacy graduates in the market,” said Ramli.

At present, 1,200 to 1,300 graduates are being produced per year, but in 2019 a major decline in pharmacy programme enrolments was observed among private universities. Ramli estimated that there would be under 1,000 graduates a year by 2023 as a result. He added that in 2018, a total of 14,479 pharmacists renewed their annual practicing certificates. 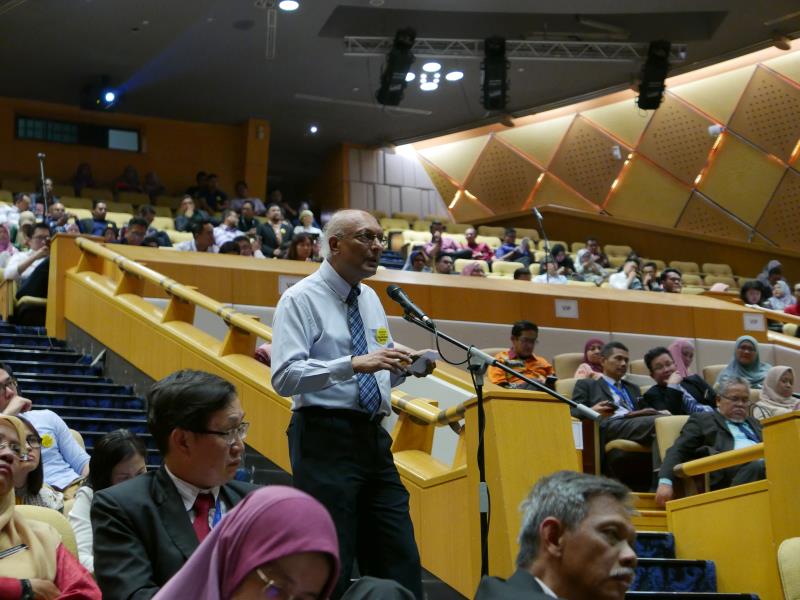 An audience member questions the MOH panelists at the town hall.

While a calm atmosphere held through most of the town hall’s questions and answers, the mood turned briefly heated when the Health Minister informed that at present, the issuance of prescriptions by doctors remained mandatory only on patient request.

“We believe that everything has its time, and we will consider [mandatory prescription] seriously, but for now, [it is] mandatory upon request. But as and when we feel we are able to do it, we will at the soonest,” said Dzulkefly.

The questioner, MCPG council member Sarah Abdullah, expressed dissatisfaction with the answer and pressed Dzulkefly and Noor Hisham to explain why the status quo was being maintained despite inherent issues of patient rights and safety. However, when Noor Hisham only reiterated that such was the MOH’s stance, objections and demands for explanation could be heard from the audience.

A subsequent questioner raised the issue again, pointing out that patient awareness of their prescription rights was poor across the country. In addition, she highlighted a recent MPS survey of 100 patients which found that 69 of them had experienced general practitioners rejecting their requests for a prescription.

“If the patient visits the doctor and requests for a prescription, it is mandatory for the doctor to give one to the patient,” replied Noor Hisham.

Both he and Dzulkefly said that to improve patient education on the matter, the MOH could undertake a social media campaign on all its available channels. Dzulkefly added that a special complaints line for patients encountering issues with obtaining prescriptions could be established.

“Currently, we’re looking at both a maximum wholesale price and a maximum retail price at the dispensing (stage) as possible models of medicine price controls,” said Ramli. “It’s an ongoing discussion. To date, we’ve had 28 engagement sessions with all the various stakeholders; government services, suppliers, industry associations, the Association of Private Hospitals (APHM), and the community pharmacies … two of those sessions have been with the MPS and MCPG, though we also require some further data for analysis from them.”

Dzulkefly added, “[About price controls,] I think we are already there; though there has been an understandable anxiety on the part of some parties, I am confident that this matter is one that we can resolve together.”

No objection to professional fees, but specialization, reimbursements to consider

“On principle, we have no objection [to professional fees for pharmacists], as currently there is no provision for fees for them,” said Ramli, which brought a wave of applause from the audience. “But a point to note is that countries which permit pharmacists to charge professional fees are also those with a country-wide reimbursement scheme … we are slightly different, with our dual public-private system. We lack a system for reimbursements.”

Dzulkefly added, “I would like to encourage the profession to enhance further its specialization. There’s no reason why there can’t be specialists in the pharmacy field, whether in clinical pharmacy, research, first-in-human [clinical trials], therapeutic drug monitoring … being a key part of patient care, I think they are deserving of their professional fees.”

Noor Hisham commented that the MOH itself was working with the Public Service Department (JPA) to look at formalizing posts for pharmacists under an expanded definition of ‘subject matter experts’ (pakar), a term currently defined in government general orders as applicable only to doctors and dentists. To begin with, specializations in any one of three areas of clinical pharmacy—infectious diseases, cardiology, and first-in-human clinical trials—will be considered for the role.

“The problem is in the private sector, there is currently no [official] body to look at specialization … we need people coming together and determining how you want the community to recognize what a specialist is,” said Noor Hisham.