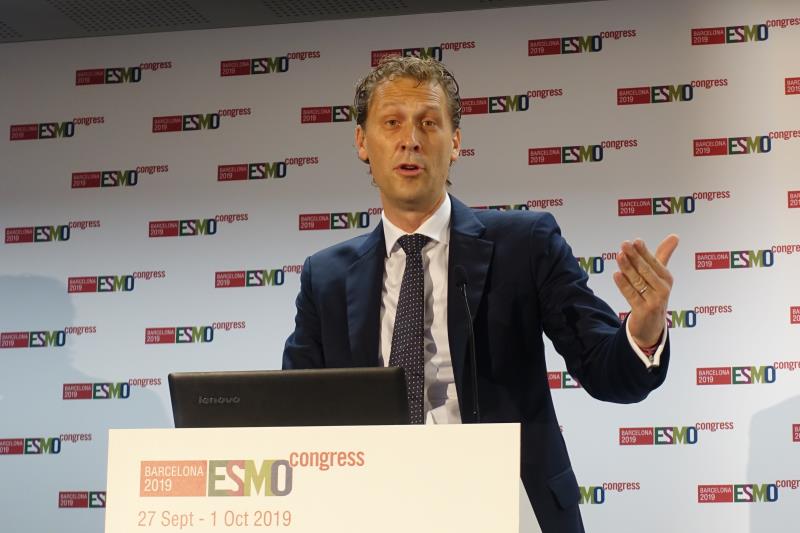 In this first phase III trial of immunotherapy in early TNBC, patients with newly diagnosed TNBC (T1c N1–2 or T2–4 N0–2) and an ECOG performance status of 0–1 were randomized 2:1 to receive neoadjuvant therapy with pembrolizumab (200 mg Q3W; n=784) or placebo (n=390), both given with 4 cycles of paclitaxel plus carboplatin followed by 4 cycles of doxorubicin or epirubicin plus cyclophosphamide. After definitive surgery, patients continued to receive allocated treatment with pembrolizumab or placebo for 9 cycles or until disease recurrence or unacceptable toxicity. [Schmid P, et al, ESMO 2019, abstract LBA8_PR]

“The benefit of pembrolizumab was independent of PD-L1 status, although pCR rates were lower in patients with PD-L1–negative tumours,” said Schmid.

“Most patients completed treatment as planned, with very low rates of discontinuation. The mean treatment duration and mean number of doses were comparable between the groups,” said Schmid.

Grade ≥3 adverse events (AEs) occurred in 78 percent of patients in the pembrolizumab group vs 73 percent of those in the placebo group, while grade ≥3 immune-mediated AEs occurred in 14.1 percent vs 2.1 percent of the patients. “The safety profile was consistent with what’s known for each regimen,” noted Schmid.

“In the neoadjuvant phase, AEs were mainly driven by chemotherapy, with small differences between the pembrolizumab and placebo groups except for rash [all grades, 21.8 percent vs 15.2 percent],” he said. “In the adjuvant phase, rates of AEs were low and between-group differences were small.”

Immune-mediated AEs were uncommon, the most common being hypothyroidism (all grades, 14.9 percent vs 5.7 percent).