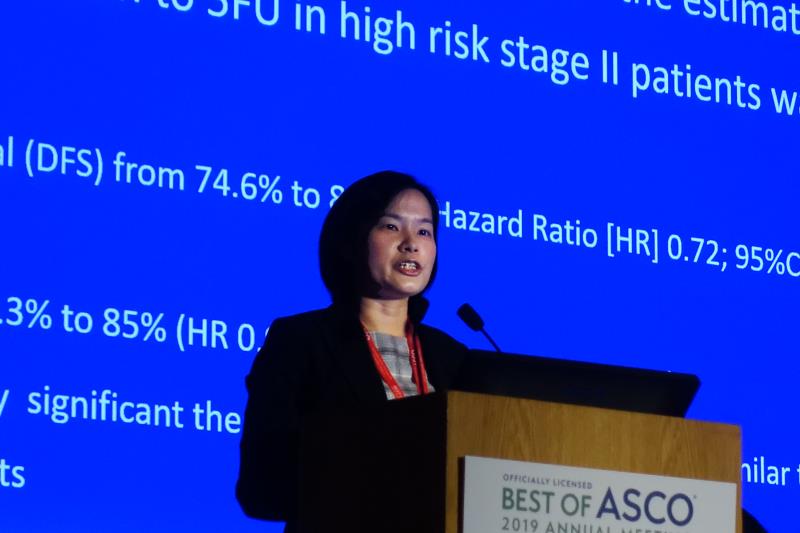 A pooled analysis of six trials failed to show noninferiority of a 3-month regimen to a 6-month regimen of oxaliplatin-based chemotherapy for patients with high-risk, stage II colorectal cancer (CRC).

The 5-year disease-free survival (DFS) rates were 80.7 percent in the 3-month arm and 83.9 percent in the 6-month arm, yielding an absolute difference of 3.2 percent and a hazard ratio (HR) of 1.17 (80 percent confidence interval [CI], 1.05–1.31). “[Based on] the forest plot, the upper limit of the CI crosses the noninferiority margin of 1.2. Hence, we cannot conclude that 3 months of treatment is noninferior to 6 months,” said Dr Dawn Chong from the National Cancer Centre Singapore who presented the findings at BASCO 2019.

Investigators from the IDEA* collaboration prospectively pooled results from six randomized phase III trials evaluating the duration of adjuvant oxaliplatin-based chemotherapy in CRC, of which four** included individuals with high-risk stage II disease (n=3,332, median age 64.2 years, 56.5 percent male). Participants had been randomized 1:1 to receive either 3 or 6 months of a CAPOX*** or FOLFOX# regimen. Median follow-up ranged from >2 years to >5 years. [BASCO 2019, abstract 3501]

The 5-year DFS rates were similar in CAPOX recipients who received the regimen for 3 and 6 months (81.7 percent and 82 percent, respectively), suggesting that the shorter CAPOX regimen is as good as the longer one. As in FOLFOX, the 3-month regimen was also less toxic than the 6-month regimen (57 percent vs 79 percent; p<0.0001).

“[As some of] our data suggested the noninferiority of 3-month CAPOX to a 6-month regimen … we can offer this option to selected stage II CRC patients with high-risk features,” said Chong. “[However, as] IDEA did not compare FOLFOX and CAPOX … we cannot compare these regimens,” she added.