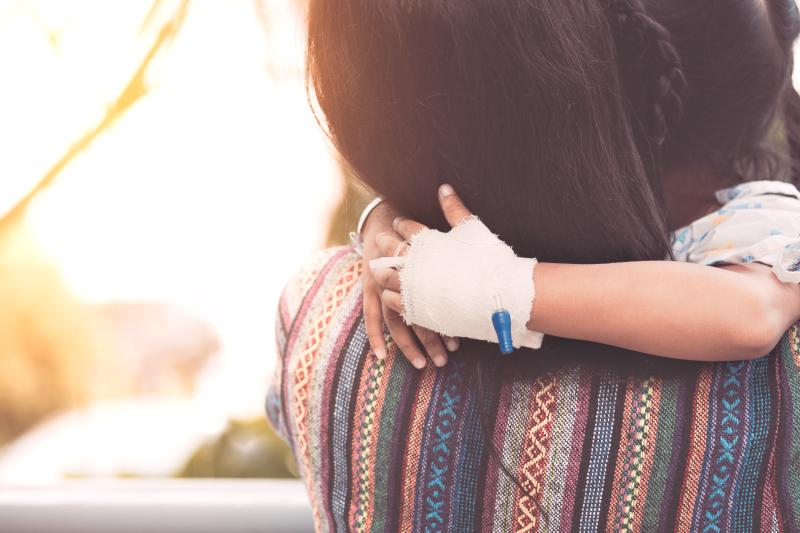 Children with moderate-to-severe uncomplicated cellulitis could be treated with intravenous (IV) antibiotics at home rather than in the hospital, results of the CHOICE* trial show.

“Findings from our study provide robust evidence that children with moderate-to-severe cellulitis can be effectively treated at home without the need for hospital admission,” said the researchers. Furthermore, the low incidence of adverse events (AEs) pointed to the safety of this regimen, they said.

Study participants were 190 children aged 6 months to 18 years with uncomplicated moderate-to-severe cellulitis who presented at the emergency department (ED) of The Royal Children’s Hospital in Melbourne, Victoria, Australia, between January 2015 and June 2017. They were randomized 1:1 to receive IV ceftriaxone at home (50 mg/kg QD; mean age 7.01 years, 60 percent male) or IV flucloxacillin in the hospital (50 mg/kg every 6 hours; mean age 7.08 years, 48 percent male), with the first dose of antibiotic administered in the ED.

Patients treated at home had slightly longer duration of IV antibiotic treatment than those treated in the hospital (2.2 vs 1.7 days; p=0.045), though total treatment duration – including oral antibiotics after IV antibiotics – was similar between groups (8.1 vs 8.3 days; p=0.73). Quality of life outcomes favoured the at-home antibiotic group.

According to the researchers, the increase in outpatient parenteral antibiotic therapy (OPAT) in children has been driven by “increased awareness among clinicians” on the poorer quality of life, increased risk of hospital-acquired infections, and higher cost associated with in-hospital vs at-home therapy.

However, questions remain as to whether the pros of OPAT outweigh the cons of ceftriaxone use, chiefly, the potential for antibiotic resistance, they said.

In the subgroup that provided blood, nasal, or stool samples, there was no significant difference in the incidence of ESBL***-producing bacteria or Clostridium difficile between groups at baseline, or 7–14 days, 3 months, or newly acquired following IV antibiotics. There were also no cases of newly acquired methicillin-resistant Staphylococcus aureus (MRSA).

As the study design was aimed at ensuring “best practice and translatability”, it is uncertain if the location or type of antibiotic contributed to the findings in this study, they added.

“Differences between ceftriaxone and flucloxacillin in effectiveness against common pathogens causing cellulitis, burden of administration, and side effects have the potential to contribute to differences in clinical outcomes,” said Drs Nathan Krah and Adam Hersh from the University of Utah, Salt Lake City, Utah, US, in a commentary. [Lancet Infect Dis 2019;doi:10.1016/S1473-3099(19)30043-X]

Krah and Hersh also advocated for the use of “oral therapy whenever possible” and encouraged further study into identifying other paediatric infectious diseases that could potentially be treated with at-home therapy.