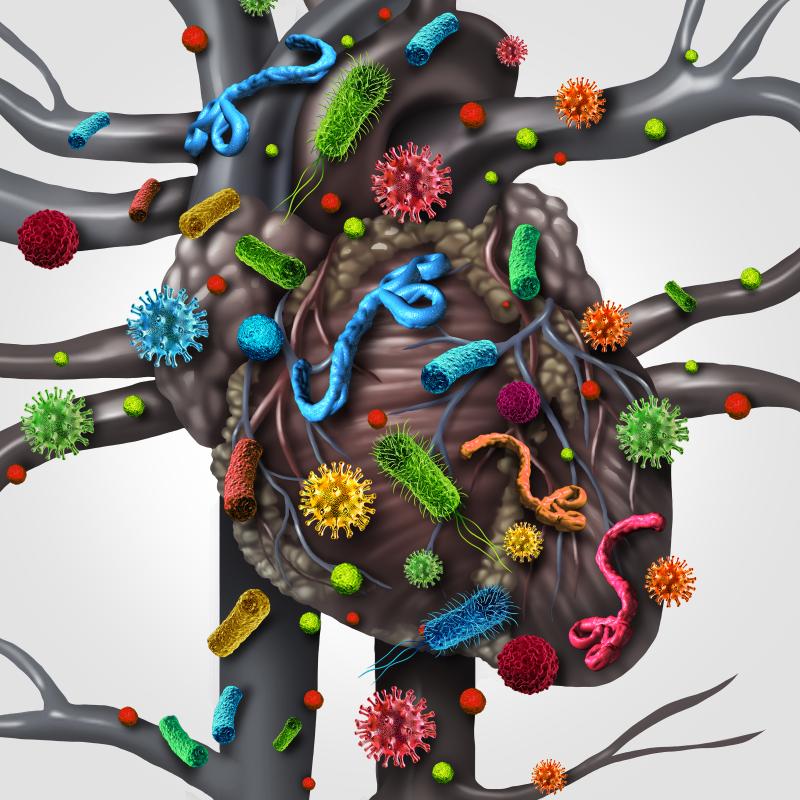 The results were obtained from a retrospective analysis of data of 2,000 adults who presented at 25 Spanish hospitals between 2008 and 2012 for infective endocarditis, of whom 429 received OPAT (median age 67.8 years, 70.6 percent male) and 1,003 HBAT (median age 68.6 years, 70 percent male). OPAT was delivered intravenously at home with patients visited daily by a nurse and ≥2 visits per week by the attending physician.

Among patients on OPAT, 57.1 percent of cases of infective endocarditis were native-valve-related, and mostly due to viridans group streptococci, Staphylococcus aureus, and coagulase-negative staphylococci. Patients received antibiotic treatment for a median 42 days and 44 percent of patients underwent cardiac surgery.

According to the researchers, the IDSA* criteria for patients with infective endocarditis who are eligible for OPAT are relatively restrictive, with OPAT limited to those with “noncomplicated left-sided mitral or right-sided native-valve infective endocarditis caused by nonaggressive, easy-to-treat streptococci (mostly from the viridans group) with neither indications for cardiac surgery nor clinical, echocardiographic, or microbiological complications”. [Clin Infect Dis 2001;33:203-209]

However, previous studies have suggested that a large proportion of patients with infective endocarditis who did not fulfil IDSA criteria for OPAT were successfully treated. [Postgrad Med J 2012;88:377-381]

“[As such], the call for a broader use of OPAT in infective endocarditis, which would require a modification of current guidelines, has gained support in the last decade,” said the researchers, who pointed out that in the present study, only 21.7 percent of patients who received OPAT fulfilled the IDSA criteria, and not meeting this criteria did not increase the risk of mortality or hospital readmission at 1 year. They suggested that a new set of “less restrictive” guidelines replace the current IDSA ones.

Patients with uncomplicated infective endocarditis and those “not caused by difficult-to-treat microorganisms that require complex antibiotic combinations” may be well suited for OPAT, though this treatment strategy may only work in centres with optimal facilities in place for this treatment, said the researchers.