Optimizing anticoagulation therapy for atrial fibrillation with prior gastrointestinal bleeding 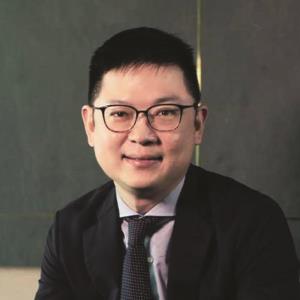 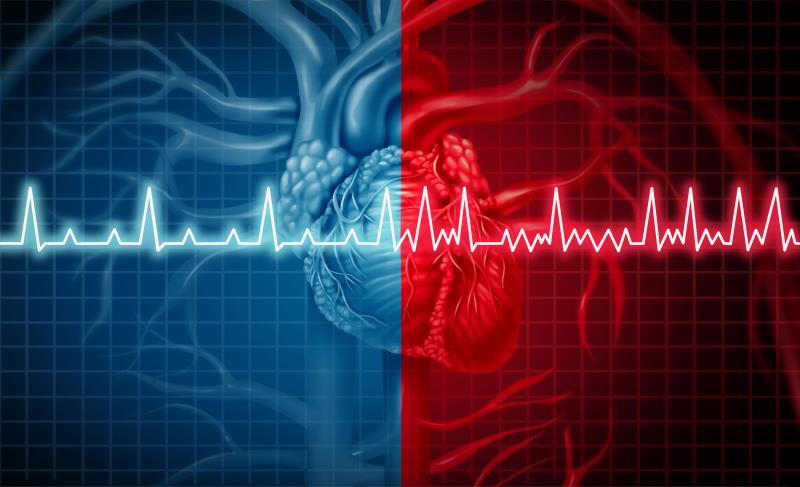 Long-term anticoagulation therapy is often recommended for patients with atrial fibrillation (AF) to reduce their risk of stroke, but gastrointestinal bleeding (GIB) is a common complication that presents a significant challenge. Patients with a history of GIB have heightened risks of recurrent bleeding events, hence interruption or discontinuation of anticoagulants is often warranted. When and how to restart anticoagulant therapy following an episode of GIB has been debated. MIMS Doctor interviewed Dr Pipin Kojodjojo, Cardiologist and Cardiac Electrophysiologist at Asian Heart & Vascular Centre, Singapore, to gather his perspectives on how to manage anticoagulant therapy after a GIB episode.

The burden of GIB in AF
GIB has a prevalence of 1–3 percent in patients on long-term oral anticoagulation therapy. [J Am Coll Cardio 2015;66:2271-2281] In AF patients, GIB leads to discontinuation of anticoagulation, which can increase the risk of ischaemic stroke, subject patients to endoscopic procedures, blood transfusions, and related side effects. [Am J Cardiol 2021;146:29-35]

“While there is no local and South-east Asian data about GIB in AF patients, there are robust data on East Asian patients from Korean and Taiwanese national insurance databases,” said Kojodjojo. “For AF patients on anticoagulation with warfarin or DOACs, the risk of GI bleeding ranges from 1.04–1.81 per 100 patient-year. [Stroke 2019;50:2245-2249] This means that in a single year of follow-up of 100 patients, more than one patient will develop GIB.”

“Risk factors for GIB include prior GIB, heavy alcohol consumption, concomitant use of other medications that can cause GIB (eg, aspirin, NSAIDs, steroids), older age, renal impairment, and Helicobacter pylori infection,” said Kojodjojo.

Anticoagulation strategies for AF with a history of GIB
Kojodjojo estimates that in clinical practice, at least 10 percent of AF patients have a history of GIB if minor GIB, such as haemorrhoids and gum bleeding, is taken into account.

He shares the following strategies for optimizing anticoagulation therapy in such patients:

•            Understand the cause of bleeding. Determine whether the risk of bleeding has been appropriately managed and what the risk of recurrent bleeding from the same source would be, often in consultation with gastroenterology colleagues.

•            Determine whether the patient has additional modifiable risk factors for bleeding. The HAS-BLED score is a helpful tool to remind us about the risk factors for non-GI bleeding that could be addressed or mitigated, such as excess alcohol intake or concurrent medications that can promote bleeding.

•            Select a DOAC with the lowest risk for GIB. Based on landmark randomized controlled trials, the rates of GIB were higher for dabigatran, rivaroxaban, and edoxaban compared to warfarin. [TH Open 2021;5:e200-e210] In the ARISTOTLE trial, apixaban patients had similar GIB rates with those on warfarin. [Am Heart J 2020;221:1-8] The trend of lower GIB rates in AF patients treated with apixaban has also been confirmed by real-world data. For these reasons, apixaban is favoured over other DOACs for AF with a history of GIB.

Restarting anticoagulation: How safe and effective
A recent network meta-analysis of real-world data compared the safety and efficacy of resuming DOACs (dabigatran, rivaroxaban, apixaban, or edoxaban) and warfarin in patients with AF and prior GIB. Ten studies, comprising 59,244 AF patients with prior GIB, were included in the final analysis. Of the number, 27,793 resumed DOACs, 24,635 resumed warfarin, and 6,816 did not resume anticoagulation. [Eur J Clin Pharmacol 2022;78:1057-1067]

Safety
Warfarin was associated with an increased risk of recurrent GIB (hazard ratio [HR], 1.33, 95 percent confidence interval [CI], 1.06–1.70), whereas resumption of DOACs was not (HR, 1.22, 95 percent CI, 0.88–1.71). Among individual DOACs, only rivaroxaban showed an increased risk of recurrent GIB (HR, 1.67, 95 percent CI, 1.16–2.65). “These data give us some confidence that in patients with prior GIB, once the source of bleeding has been appropriately managed, DOACs except rivaroxaban can be safely restarted, with bleeding rates not statistically different from patients who did not resume anticoagulation,” said Kojodjojo.

Overall, the data suggest that in Asian population, resumption of DOACs signiﬁcantly reduced the risk of thromboembolic events (HR, 0.61, 95 percent CI, 0.54–0.68) and mortality (HR, 0.82, 95 percent CI, 0.76–0.89) vs resumption of warfarin. [Eur J Clin Pharmacol 2022;78:1057-1067] However, Kojodjojo advised caution in interpreting the results. “This is based on retrospective data from a single Korean registry. More than half of the patients were also taking concomitant antiplatelets. These observations were not seen in the wider meta-analyses, implying either bias, or differences between Asian and non-Asian response to resuming anti-coagulation,” explained Kojodjojo.

“In my practice, warfarin is infrequently used unless patients have an absolute contraindication to a DOAC, such as the presence of a metallic mitral valve,” he shared. “Given the multiple benefits of DOACs over warfarin, including lower risk of intracranial bleeding, renal dysfunction, and mortality benefits, I would actively switch patients stable on warfarin to a DOAC.” This is in line with international guideline recommendations to select DOACs over warfarin for stroke prevention in nonvalvular AF patients. [Eur Heart J 2021;42:373-498]

“In AF patients who had stopped anticoagulant therapy due to GIB, the cause of the GI bleeding and whether it has been mitigated is an important consideration of when it would be safe to restart anticoagulation. Once the cause of the GI bleeding has been eliminated, for example, duodenal ulcer, patients with CHA2DS2-VASc score of ≥1 for men, or ≥2 for women, should resume anticoagulation. However, in cases where there is still an active source of bleeding, such as unresected gastrointestinal cancer, it would be unsafe to restart anticoagulation,” he elaborated.

Patient wishes, life expectancy, and comorbidities should also be considered. Nonpharmacological therapy for stroke prevention, such as left atrial appendage occlusion, should be likewise discussed.

“Once it is decided that anticoagulation should be resumed, the timing of resumption should be based on shared decision-making with the patient, family, and the gastroenterologist,” Kojodjojo advised. 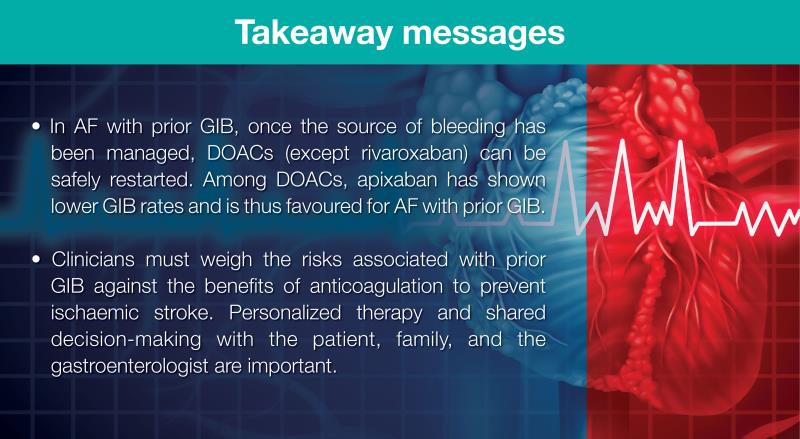