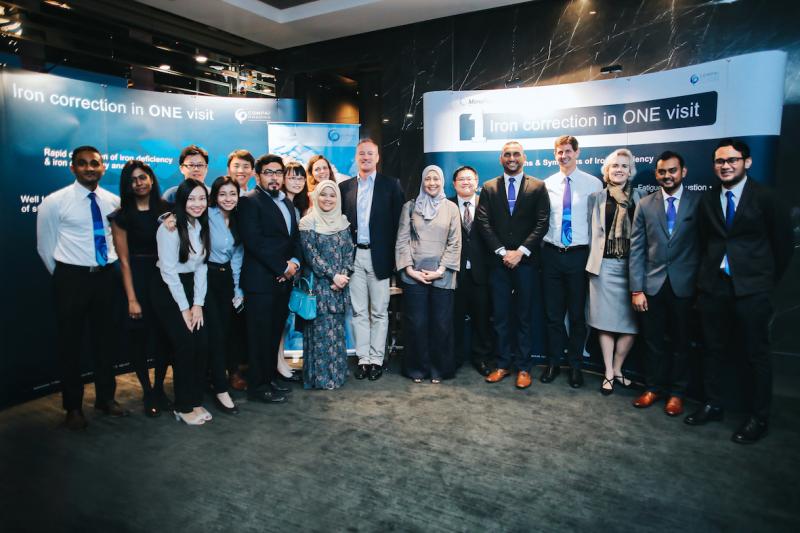 Iron deficiency (ID) should be considered a disease because anaemia is the end result of ID, which is defined as serum ferritin <30 ng/mL. In patients with inflammatory diseases such as chronic heart failure, chronic kidney disease and rheumatoid arthritis, serum ferritin <100 ng/mL may also indicate absolute ID. If ferritin is <100 ng/mL, transferrin saturation (TSAT) <20 percent and C-reactive protein >5 mg/L, patients also have absolute ID and chronic inflammation. For functional ID or anaemia of inflammation, patients may have ferritin >100 ng/mL, TSAT <20 percent and CRP >5 mg/L. If the ferritin is between 30 and 100 ng/mL and TSAT >20 percent, iron stores are low. These patients will benefit from iron therapy. [Blood Transfus 2017;15:422–437]

Workshops on patient blood management (PBM) were started in 2012 among the Ministry of Health hospitals. PBM is the optimization of care of patients with ID through evidence-based and multidisciplinary approach. The three pillars of PBM include optimizing red cell mass by giving patients intravenous (IV) iron or erythropoietin; minimizing blood loss and bleeding during surgery and reducing blood tests; and harnessing and optimizing physiological reserve of anaemia.

There is evidence to show that blood transfusion increases the risk of immunosuppression, acute lung injury, cardiopulmonary overload, HLA allo-immunization, microchimerism, risk of blood-borne infections and risk of venous thromboembolism. Transfusion just increases haemoglobin but does not address ID. Transfusion has significant costs— in the US, one unit of packed red cells costs at least US$726. [Best Pract Res Clin Anaesthesiol 2013;27:59–68] In Malaysia, one unit of packed red cells costs RM500 just for blood bag and nucleic acid testing. Other costs such as payment for staff to collect blood via mobiles are not accounted for.

A US study comparing a hospital practicing PBM with other hospitals that are not practicing PBM showed that PBM reduces transfusion by 10 to 90 percent as well as mortality, average length of hospital stay, reoperation, readmission to hospital, complications and costs. [Open Anesthesiol J 2015;9:1–11]

A local survey on clinicians including 916 physicians and 315 surgeons was conducted in 2017. The survey found that although most have heard about PBM (55 percent), would like to practice PBM (82 percent) and find IV iron safe and effective (75 percent), they still accept blood transfusion as the common practice (97 percent).

Women are at a higher risk for ID due to menstruation and pregnancy. A population-based screening in Malaysian adults found that the incidence of anaemia in nonpregnant women and women of reproductive age was about 34 percent each. This means 1-in-3 women are anaemic. [J Community Med Health Educ 2017;7:513]

During pregnancy a 55 kg woman requires about 1000 mg of iron. When nongravid women menstruate, they lose some blood and they absorb 1-2 mg of iron per day. When they enter the first trimester, the absorption of iron is reduced to about 0.8 mg per day. During the second and third trimesters, the absorption increases to about 500 mg of iron for red cell expansion and foetal development. About 100-200 mg is stored to prepare for blood loss during delivery. Hence, it is important to prepare women for the blood loss during antenatal to avoid blood transfusion during delivery.

Symptoms of ID among mothers include breathing difficulties, fainting, tiredness, palpitations and sleep difficulties. If ID is severe enough, it can lead to heart failure and further complications to the delivery. ID also increases the risk of developing perinatal infections, pre-eclampsia and bleeding. Maternal ID will affect the baby as it may cause prematurity, intrauterine growth retardation and low birth weight. [Saudi Med J 2015;36(2):146–149] Maternal iron deficiency anaemia (IDA) is considered a significant risk factor for low birth weight. [Nutrients 2018;10:601]

IV iron should be considered if oral iron is ineffective, not tolerated or if IDA is diagnosed in the third trimester. A Froessler study showed IV iron of about 1000 mg can significantly improve haemoglobin levels in women with ID and IDA. [Arch Gynecol Obstet 2018;298:75–82]

Anaemia is common among non-cardiac and non-neurological surgical patients and associated with poor clinical outcome and increased healthcare resource use. [Br J Anaesth. 2014;113:416–423]

Perioperative transfusion is associated with increased morbidity and mortality due to increased risks of ischaemic stroke and myocardial infarction. [BMJ 2015;350:h3037]

If the surgery is suspected to cause possible significant bleeding, we need to measure patients’ iron stores and correct ID and replace the lost iron. Implementing PBM is a multidisciplinary effort. [Br J Anaesth. 2015;115:15–24]

Untreated anaemia and inappropriate transfusions are both bad for patients in addition to being extra burdens to the healthcare system.

Oral iron supplements given daily or twice daily increase hepcidin levels and result in reduced iron absorption. [Blood 2015;126:1981–1989] As such, iron tablets are better tolerated with improved outcomes if given every other day.

Oral iron takes time to correct iron levels in the body. Iron amounts >1500 mg is often needed to correct ID. As a standard dose of 200 mg/day of iron from oral iron sulphate tablets leads to absorption of <20 mg/day, oral iron dosing requires upwards of 75 days to restore iron levels in a best-case scenario.

Before administration of IV iron, patient must be well informed of the procedure and well hydrated. The procedure should be started slowly especially for those who are anxious and patients monitored closely during the last 15 minutes.

Mild reactions (about 10 percent of patients) during an iron infusion include hypersensitivity, nausea and drop in blood pressure. Anaphylactic-like reaction is rare and happens 1-in-250,000 which is the same rate for an antibiotic or vaccination. Post-infusion mild events may be present in 10 percent of patients with common symptoms such as body aches, fever and flu-like symptoms. These symptoms resolve in 48 hours to 5 days after the procedure and can be treated with analgesics such as ibuprofen.
LOGIN TO READ FULL STORY