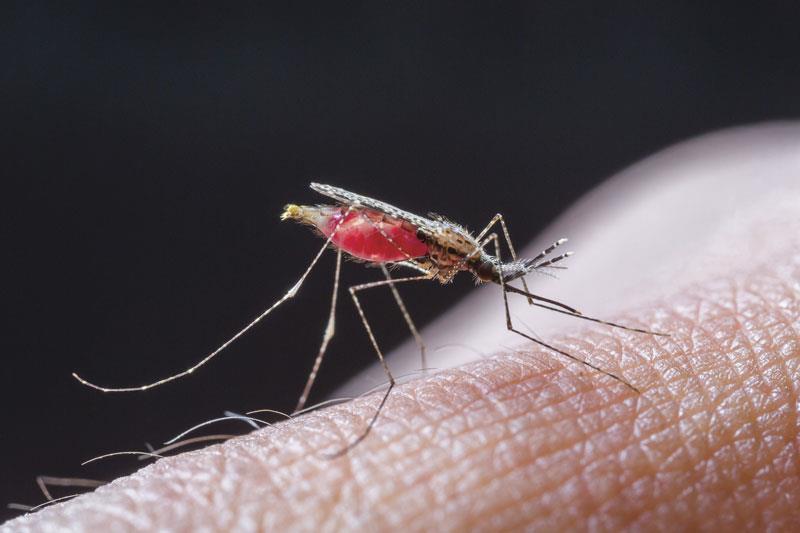 Monthly prophylaxis with the fixed-dose combination of naphthoquine-azithromycin (NQAZ) is well tolerated and confers significant protection against infection with Plasmodium parasites among individuals residing in malaria-endemic areas in Southeast Asia, as shown in the results of a phase III trial.

“In an area with ~8 percent prevalence of Plasmodium infections, the monthly oral administration of 400-mg NQ/400-mg AZ provided an overall >90 percent protective efficacy [against] malaria parasitaemia during a 2-month follow-up period,” the investigators said.

The trial included 631 individuals aged 5–65 years who lived in villages along the China-Myanmar border, where malaria transmission occurs perennially, estimated at >10 percent per year, and peaks in May–September. A total of 319 participants were assigned to receive NQAZ and 312 to receive placebo as a single-dose monthly treatment. They were monitored weekly for 2 months for adverse events and malaria infections. [Malar J 2013;12:361; http://apps.who.int/iris/bitstream/handle/10665/204266/9789241549394_eng.pdf]

Forty-nine out of the 531 participants who completed the trial had blood smear-positive Plasmodium infections: 46 in the placebo group and three in the active treatment group. In the former group, 37 cases of infection (17 P. falciparum, 16 P. vivax, and four P. ovale) occurred in the first month, and nine (two P. falciparum and seven P. vivax) in the second month. On the other hand, the three patients who received NQAZ had acute P. falciparum malaria attacks in the first month. [Clin Infect Dis 2020;doi:10.1093/cid/ciaa1018]

“Since both the NQAZ and the placebo populations resided in the same villages,” the investigators noted, “it is possible that drastic reduction of new infections in the treatment group and also treatment of smear-positive cases in the placebo group led to the overall reduction of new blood-stage infections in the second month.” They also pointed out that most of the P. vivax infections that occurred in the second month might be relapse cases.

Treatment was well tolerated, and there were no serious adverse events recorded in either group. None of the participants discontinued treatment due to adverse events. Potential drug-related adverse events included 18 (5.6 percent) cases of increased levels of liver transaminases in the NQAZ group, as compared to seven (2.2 percent) in the placebo group (p>0.05).

The NQAZ fixed-dose combination was developed as a prophylactic medication in villages endemic for both P. falciparum and P. vivax. At a single dose of 400-mg NQ/400-mg AZ, the combination was safe and offered >90 percent prophylactic efficacy against all malaria species within a month in an early trial. [Antimicrob Agents Chemother 2018;62:e00793-18]

“In the study area, P. vivax accounted for >70 percent of the parasites detected at the baseline,” the investigators said.

Some vivax-endemic regions have seen success with mass drug administration of primaquine. This drug, however, has been associated with severe haemolysis in patients with glucose-6-phosphate dehydrogenase (G6PD) deficiency. [Malar J 2013;12:383]

“Under [such a] scenario, the excellent safety profile of NQAZ and its superb protective efficacy against P. vivax malaria make monthly NQAZ an excellent choice for [malaria] elimination … in regions with a high prevalence of G6PDd,” they added.

Considering the present data, the investigators are positive that administering NQAZ as monthly prophylaxis may lead to continuous, dramatic reduction and possibly eventual elimination of Plasmodium infections in the future.