Novel nasal stethoscope nails down underlying cause of nasal obstruction 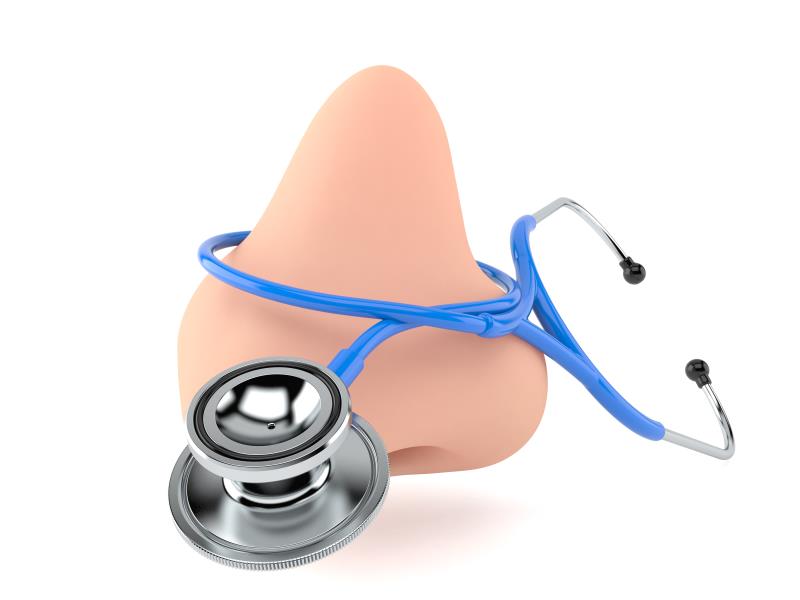 A nasal acoustic device (NAD), touted as the first of its kind, not only differentiates between normal and abnormal nasal breathing but also pinpoints the underlying cause for nasal obstruction.

Designed by a team of scientists from the University College London in UK, NAD functions like a stethoscope whereby two small acoustic sensors are placed over the left and right wing of the nose to measure nasal airflow bilaterally and in real time.

“Importantly, [the device] eliminates distortion of nasal airflow which occurs when airflow directly contacts the acoustic sensor,” according to the team. They pointed out that this noninvasive technique enables the diagnosis of the common causes for nasal obstruction—namely allergic rhinitis (AR), chronic rhinosinusitis (CRS), and a deviated nasal septum (DNS).

The diagnosis is made based on disease-specific acoustic metrics developed by the scientists. One is the novel nasal acoustic (NA) score, measured as the average acoustic power during inspiration (INA) or expiration (ENA). The other is the nasal obstruction balance index (NOBI), which indicates the degree of asymmetry within the nose.

NAD was tested in 27 patients (mean age, 33 years; 15 men) with AR, CRS, and/or DNS and 26 control individuals with normal nasal breathing (13 each in the test and validation cohorts). Each participant underwent measurement of nasal inspiratory peak flow (NIPF) and assessment of nasal breathing sounds by NAD before and 10 minutes after applying nasal decongestant.

The scientists conducted four sets of tests to distinguish between two groups of individuals (patients vs controls; those with vs without AR vs with AR; with vs without CRS; and with vs without DNS). The NOBI score facilitated differentiation between DNS and non-DNS participants, while the INA and ENA scores were used in the other tests.

“The change in acoustic score following decongestant is key in the diagnostic process,” the team said.

In the AR vs non-AR test, post-decongestant percentage change in INA score at 1,700–3,400 Hz identified the presence of allergic rhinitis, with a sensitivity of 87 percent and a specificity of 72 percent. On the other hand, post‐decongestant percentage change in NIPF showed no significant difference between the AR and non‐AR groups (p=0.203), with corresponding sensitivity and specificity of 50 percent and 57 percent. [Laryngoscope Investig Otolaryngol 2020;5:796-806]

Results for the CRS vs non-CRS test followed the same pattern. Post‐decongestant percentage change in INA score at 1,600–6,400 Hz was able to detect chronic rhinosinusitis with 92-percent sensitivity and 69-percent specificity. Using post‐decongestant percentage change in NIPF as the metric, there was no statistically significant difference seen between the CRS and non‐CRS groups (sensitivity, 89 percent; specificity, 34 percent).

In differentiating between patients and controls, pre‐decongestant ENA score at 2100–4600 Hz had a sensitivity of 81 percent and specificity of 77 percent as opposed to 68 percent and 92 percent, respectively, with NIPF. Both metrics performed well.

The results were reproduced in the validation cohort.

A boon in COVID-19 times

“We have demonstrated that the NAD can help diagnose the cause of nasal blockage, which is a novel finding and has not been [seen] before. The INA, ENA, and NOBI scores were significantly superior in the diagnosis of AR, CRS, and DNS when compared to NIPF,” the scientists said.

They believe that the device could revolutionize the way patients with nasal complaints are managed in primary care by “diagnosing the underlying condition, better streamlining treatment, and reducing costly secondary care referrals.”

NAD also rises to meet current healthcare practices pushed by COVID‐19. As a noninvasive method of assessing the nasal airway, the device uses equipment that can easily be sterilized to minimize the risk of virus transmission. “This is a significant advantage over current tools, including NIPF, acoustic rhinometry, and rhinomanometry that either involve forced breathing or instrumentation of the nose,” the scientists pointed out.

“The device would complement telemedicine consultations by providing a noninvasive assessment, enabling safe triaging, and a treatment service without the need to come to hospital,” they added.

The next step in the study is to evaluate the ability of the device to measure nasal obstruction severity, as compared against both patient- and clinician-reported measures of severity.