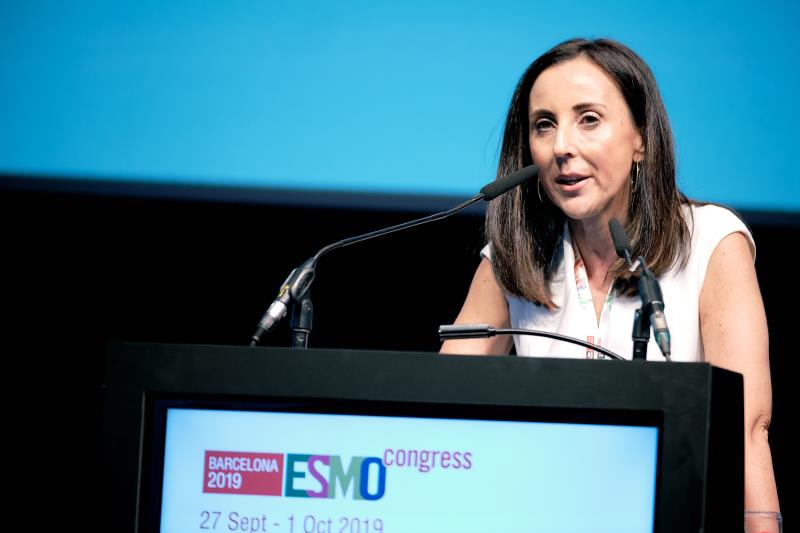 Treatment with the selective PARP* 1/2 inhibitor niraparib after a response to first-line platinum-based chemotherapy significantly extends progression-free survival (PFS) in patients with newly diagnosed advanced ovarian cancer, including those at high risk of relapse, according to the PRIMA** study presented at ESMO 2019.

“We are witnessing a paradigm shift in the first-line treatment for advanced ovarian cancer,” said invited discussant Dr Ana Oaknin from the Vall d'Hebron Institute of Oncology, Barcelona, Spain.

“Niraparib is the first PARP inhibitor to demonstrate benefit in patients across biomarkers subgroups [regardless of BRCA mutation status] after platinum-based chemotherapy in frontline,” said lead investigator Dr Antonio González Martín from the Clínica Universidad de Navarra in Madrid, Spain.

PFS benefit across all subgroups

“Despite current options for maintenance treatment, there is still a high unmet need for many patients,” said González Martin. The use of bevacizumab is limited due to safety concerns and a lack of data in the growing number of patients receiving neoadjuvant chemotherapy, whereas olaparib is limited to patients with BRCA mutations, which constituted approximately 20 percent of patients with ovarian cancer.

As such, many patients undergo active surveillance following chemotherapy, according to González Martin. However, up to 85 percent of patients still had recurrence after completion of standard first-line platinum-based chemotherapy, he noted.

Unlike conventional PARP inhibitors whereby the clinical activity was often related to the presence of BRCA mutations, niraparib has shown significant activity in both tumours with mutated or wild-type BRCA. Therefore, the double-blind, phase III PRIMA trial enrolled patients irrespective of BRCA status.

Among the HRd patients, similar PFS benefit was seen with niraparib regardless of whether the patients harboured mutated (HR, 0.40) or wild-type BRCA (HR, 0.50). There was also a significant PFS improvement with niraparib in the homologous recombination-proficient subgroup (HR, 0.68, 95 percent confidence interval, 0.49–0.94).

“Niraparib extends treatment beyond chemotherapy and provides a sustained PFS benefit for those at risk for early relapse, including the one-third of patients who had a partial response to platinum-based chemotherapy,” reported González Martín and colleagues. The corresponding median PFS for this patient group was 8.3 months vs 5.6 months (HR, 0.60).

The HRs for the secondary endpoint of overall survival at 2 years were 0.70 for the overall population, 0.61 for the HRd subgroup, and 0.51 for the homologous recombination-proficient subgroup in an interim analysis.

The adverse event (AE) profile was consistent with the PARP inhibitor class, with reversible myelosuppression being the most common treatment-emergent AE. Twelve percent of the patients in the niraparib group discontinued treatment due to AE, of which 4.3 percent was due to thrombocytopenia.

A new standard of care?

During the discussion session, Oaknin asked whether the benefit of adding a PARP inhibitor as maintenance therapy to first-line treatment is clinically meaningful enough to justify its use as a new standard of care.

“While the benefit is clinically meaningful in the overall population, we should consider PFS outcomes according to the biomarker status in the selection of optimal therapy,” she said, highlighting that companion diagnostic test will be needed for this purpose.

Oaknin also raised the question of which sequence of therapies is the best for patients. “The only opportunity to 'cure' our patients with advanced ovarian cancer is with first-line therapy,” she said.

“In the HRd population, there is a robust reduction in the risk of progression...that strongly justifies moving PARP inhibitor to first line,” she noted. “Previous data also suggest that prior PARP inhibitor treatment does not compromise subsequent therapy benefits.”