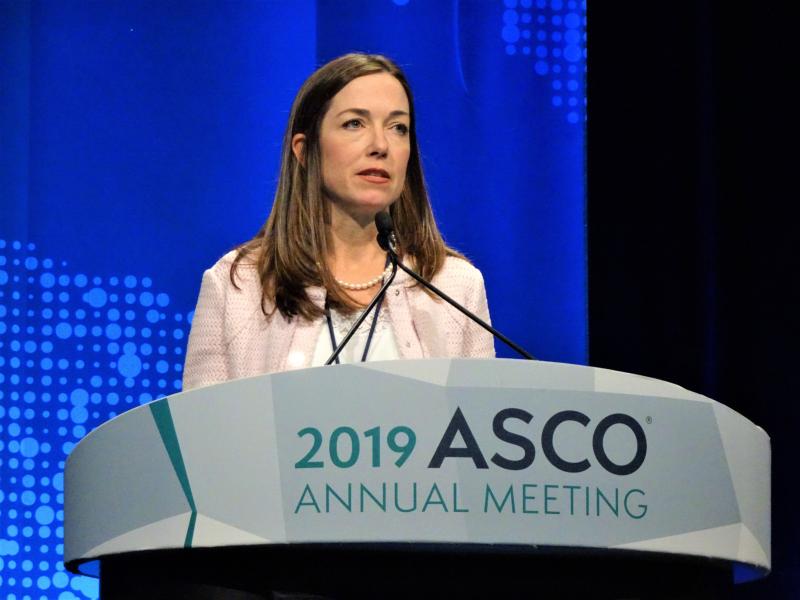 Neoadjuvant treatment with trastuzumab emtansine (T-DM1) plus pertuzumab led to an elevated risk of 3-year event-free survival (EFS) events in patients with HER2-positive breast cancer, according to a secondary analysis of the KRISTINE* trial presented at ASCO 2019.

The patients with locoregional progression had lower HER2 expression and higher HER2 heterogeneity, which suggests that they may require conventional systemic chemotherapy combined with a HER2 blockade, said study lead author Dr Sara Hurvitz from the University of California, Los Angeles in Los Angeles, California, US.

Three events of noninvasive recurrence after surgery were reported in the T-DM1+P arm compared with none in the TCH+P arm.

Among patients who underwent surgery after six cycles of study-assigned therapy, the risk of 3-year invasive disease-free survival (IDFS) events was comparable between the two treatment groups (13 events in each arm, stratified HR, 1.11, 95 percent CI, 0.52–2.40).

Further analysis in patients who achieved pathologic complete response (pCR) revealed no difference in 3-year IDFS between treatment groups (96.7 percent [T-DM1+P] vs 97.5 percent [TCH+P], stratified HR, 0.99, 95 percent CI, 0.20–4.96). “The achievement of a pCR, regardless of treatment, was associated with a very high IDFS rate,” Hurvitz said.

Over the study period, which included the neoadjuvant period when the TCH+P group received cytotoxic chemotherapy, TCH+P was associated with a higher rate of serious and grade ≥3 adverse events (AEs) compared with T-DM1+P (32.4 percent vs 13.5 percent [serious AEs] and 67.6 percent vs 31.8 percent [grade ≥3 AEs]).

A similar pattern for global health status and physical and cognitive functioning scales was observed in both treatment arms. However, impairments were observed, which was expected, when patients in the T-DM1+P arm also received adjuvant cytotoxic chemotherapy at around cycle 4 during the adjuvant phase, Hurvitz said.

“Overall, the observed worse EFS and similar IDFS associated with T-DM1+P might suggest the importance of selecting patients for a conventional chemotherapy-sparing neoadjuvant regimen … and must be confirmed in prospective studies, hopefully using biomarkers, said Hurvitz.

“The new results of the KRISTINE trial further reinforce the notion that the adjuvant setting can serve as a platform for risk stratification in clinical practice as well as for the development of new treatments for [patients with] HER2-positive breast cancer,” wrote Dr Antonio Wolff from The Johns Hopkins Kimmel Comprehensive Cancer Centre, Baltimore, Maryland, US, in an editorial. [J Clin Oncol 2019:JCO1901159]