Naproxen, lidocaine do not dull pain during IUD insertion 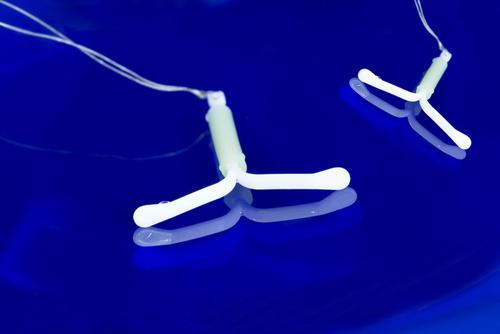 IUD contraception method requires insertion of a T-shape device into the uterus.

Naproxen, whether alone or used with intrauterine lidocaine, does not provide significant analgesia during the insertion of intrauterine devices (IUDs), according to a recent study.

“To our knowledge, this is the first randomized, double-blind, placebo-controlled study comparing the use of nonsteroidal anti-inflammatory drugs (NSAIDs) and intrauterine instillation of anaesthetic for IUD insertion. There was no observed multiplicative effect,” said researchers.

Thirty days after IUD insertion, researchers likewise found that the different treatments bore no significant effect on the need for postprocedure analgesia among the different treatment groups. For instance, 25 percent of those who received both lidocaine and naproxen used postoperative analgesia, as compared to 20 percent and 22.5 percent in the lidocaine-alone and naproxen-alone arms, respectively.

In comparison, 30.8 percent needed analgesia in the placebo group. Between-group comparisons failed to reach statistical significance. Disaggregating the analysis according to the type of IUD did not meaningfully change the principal findings.

Despite no noticeable effect of the treatments, overall satisfaction with the procedure was high. Almost all (98 percent) responded that they were satisfied to extremely satisfied with the operation, while 97 percent agreed that they would have an IUD placed again. The type of IUD inserted had no significant effect on satisfaction.

“Consistent with other studies, the data suggests that there is no significant difference in pain control during IUD insertion using NSAIDs like naproxen,” said the researchers. “There were also no differences in pain ratings or postprocedure analgesia in patients receiving the intrauterine lidocaine as compared to saline.”

“Interestingly, there was a trend towards decreased usage of postprocedure analgesics in the lidocaine instillation arms within the levonorgestrel IUD treatment groups; however, this study was not adequately powered for this outcome measure,” they added.

Other limitations of the study included the use of saline in the placebo group, which still may have constituted a treatment, and the failure to account for the potential effects of installing the device.

“Given the pain ratings of our patients at the lower end of the reported range, this may suggest that the instillation and distension of the uterus may affect the nerve endings within the endometrium and, consequently, patients’ perceived pain rating,” the researchers explained.

In terms of safety, one patient returned after approximately an hour and presented with vasovagal symptoms. This had no effect on the retention of her device. Another patient developed pelvic inflammatory disease around 1 week after IUD placement and had had the device removed.