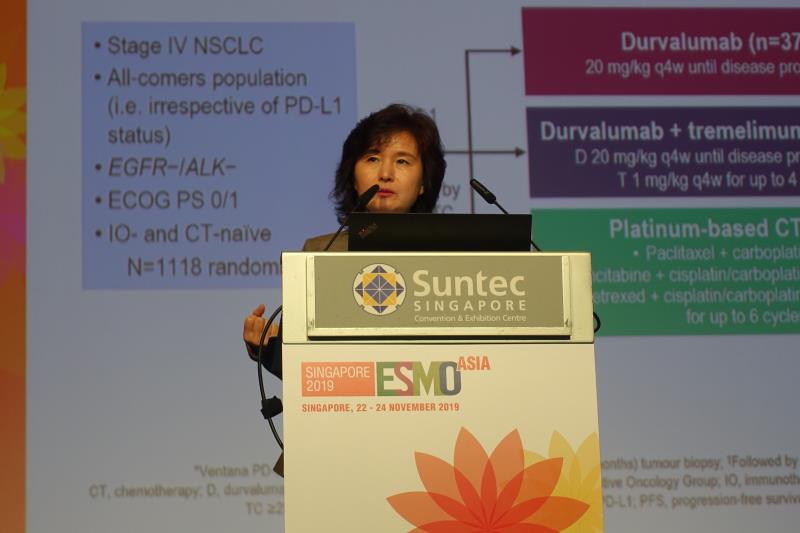 Treatment with durvalumab with or without tremelimumab appeared to improve overall survival (OS) in Asian patients with metastatic non-small cell lung cancer (mNSCLC) compared with chemotherapy (CT) in the first-line setting, according to a post hoc analysis of the MYSTIC* trial presented at ESMO Asia 2019.

This multicentre, open-label, phase III trial involved 488 patients with mNSCLC who had PD-L1 tumour cell (TC) expression of ≥25 percent. Participants were randomly assigned to receive durvalumab** alone (n=163 overall [59 Asians]), durvalumab** + tremelimumab 1 mg/kg every 4 weeks for up to four doses (D+T group; n=163 overall [50 Asians]), or platinum-based CT*** (n=162 overall [47 Asians]) for up to six cycles. The primary analysis has been reported in the 2018 ESMO Congress. The current post hoc analysis was on 156 Asian patients, which made up 32 percent of the overall intent-to-treat population. [ESMO Asia 2019, abstract 474O]

An improved median OS was also observed among Asian patients treated with D+T than those who received CT (17.7 vs 10.6 months; HR, 0.64, 95 percent CI, 0.40–1.03), “but the number is quite small, so we should be very cautious in interpreting these data,” said Dr Myung-Ju Ahn from Samsung Medical Center in Seoul, South Korea.

All treatment arms showed similar overall response rates at 32.2 percent, 36.0 percent, and 36.2 percent, which were also consistent with the overall population at 35.6 percent, 34.4 percent, and 37.7 percent (for durvalumab alone, D+T, and CT, respectively).

However, the rate of subsequent anticancer therapy was higher among Asian patients compared with the overall population in the D+T arm (60.0 percent vs 37.4 percent ).

“In MYSTIC [trial], while statistical significance was not achieved, a clinically meaningful improvement in OS was observed for first-line durvalumab vs CT in patients with mNSCLC and PD-L1 TC ≥25 percent,” Ahn concluded.

Grade 3 or 4 treatment-related adverse events (AEs) occurred more frequently in the D+T arm than the durvalumab alone arm (23.9 percent vs 19.7 percent), which was expected and manageable, Ahn noted.

“The safety profile of durvalumab ± tremelimumab in the Asian subgroup was manageable and consistent with the overall MYSTIC population and previous studies,” Ahn noted.

**Durvalumab: Dosage at 20 mg/kg every 4 weeks and continued until disease progression