Micronized progesterone may have benefits for hot flashes in perimenopause 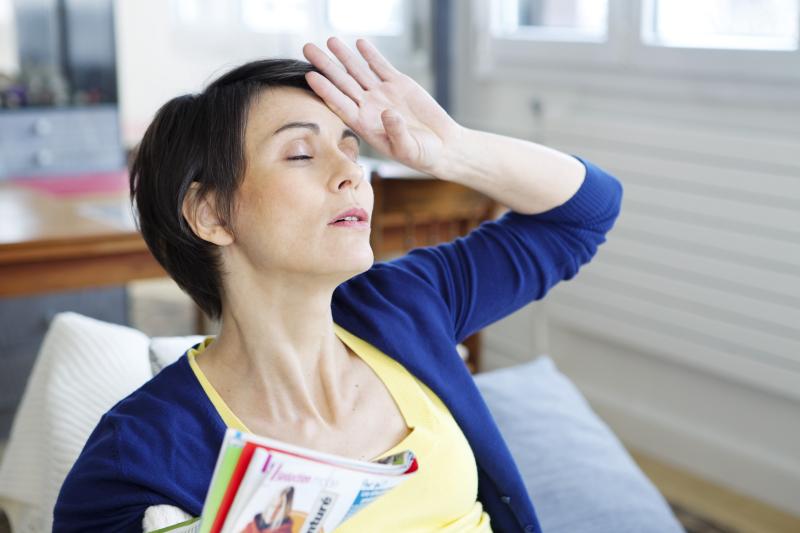 Oral micronized progesterone (OMP) may provide relief for perimenopausal women who had hot flashes and night sweats, according to a study presented at the ENDO 2018 Annual Meeting.

“At present, there is no effective therapy for them. Although not scientifically proven to be effective, women are often prescribed the birth control pill for hot flash symptoms, which may not be safe because women’s risks for blood clots and strokes increase with age and weight gain,” said lead author Professor Jerilynn Prior of the University of British Columbia in Vancouver, Canada.

The nationwide trial involved 189 women (mean age 50 years) with “bothersome vasomotor symptoms (VMS)”, defined as at least two awakenings due to night sweats per week or 56 VMS per 4 weeks. They were randomized to OMP 300 mg at bedtime or a matching placebo for 3 months. Two-thirds (66 percent) of women had skipped a period and the majority (98 percent) had been awakened twice per week with night sweats. Baseline characteristics were similar across groups, including VMS scores. [ENDO 2018, abstract OR25-7]

By 3 months, the primary endpoint of diary-derived VMS scores (recorded night and day on intensity and number of episodes) were numerically lower in the OMP than the placebo groups (5.5 vs 7.1; p=0.19), although the difference was not statistically significant between groups. According to Prior, the lack of statistical significance could be attributed to the study being underpowered.

Nonetheless, women treated with OMP perceived significantly less intense day and night VMS than women receiving placebo (median, -3; p=0.014 vs -1; p<0.001 for day and night VMS, respectively), which according to the researchers, were clinically important.

Stratifying the analysis by ‘early’ (without skipped period) or ‘late’ perimenopause, the researchers observed that women in late perimenopause experienced more improvements than those in early one.

“Almost a quarter of all women today are in perimenopause. They are often working as well as maintaining a home and caring for children and elders. About 20 percent of them will need effective treatment for hot flashes and night sweats to continue to be productive,” said Prior.

Explaining on the science behind using progesterone for treating perimenopausal symptoms, Prior pointed out that progesterone levels have been shown to be lower than normal in perimenopause, besides improving sleep quality without causing side effects such as blood clots.

There were no serious adverse events reported and most of the participants (93 percent) completed the trial. Adherence, as assessed by pill counting, was high in both the OMP and placebo groups (91.4 percent and 84.4 percent, respectively).

“This first ever perimenopause VMS hormonal and RCT of oral micronized progesterone (300 mg) for hot flash and night sweat therapy demonstrated no serious adverse effects and may be effective for VMS in perimenopausal women,” Prior concluded, suggesting that future study be conducted in larger number of women to confirm the results.