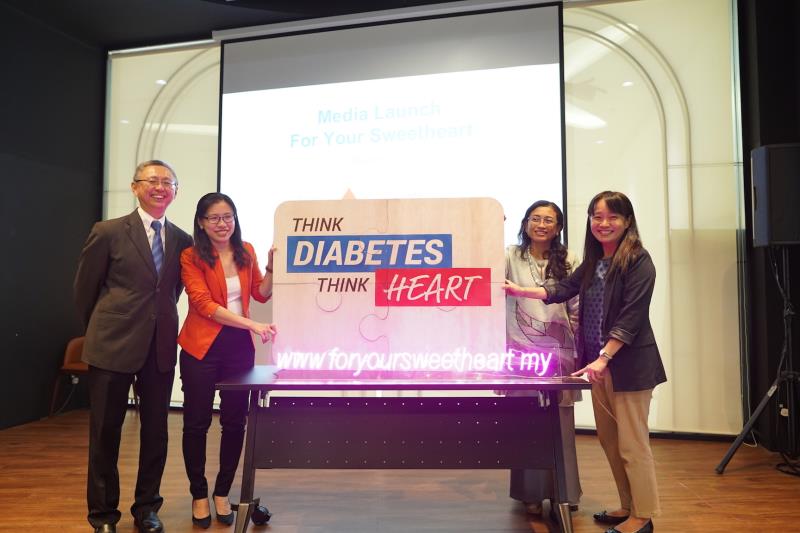 According to Dr Zanariah Hussein, president of MEMS and consultant endocrinologist at Hospital Putrajaya, discussing the common complications of diabetes is not enough anymore. She said: “Approximately 50.3 percent of deaths in people with diabetes are caused by diabetes-related heart disease. We need to address this problem urgently. Through For Your Sweetheart Campaign, we want to educate the public, especially those who are affected by diabetes, about the link between diabetes and heart disease.” [https://www.niddk.nih.gov/health-information/diabetes/overview/preventing-problems/heart-disease-stroke Accessed on 14 August 2019]

According to Siah Guan Jian, president of MDES and principal diabetes educator (DE) at National Heart Institute (IJN), the diabetes educators can help to bridge the gap in understanding the link between diabetes and heart disease. Siah said: “Our role in diabetes control and management is to educate those living with diabetes about their increased risks of developing heart disease and empower them with knowledge that can help them protect their heart from further damage. Through this campaign, we encourage everyone with diabetes to speak to DEs to not just learn more about how they can control their condition better, but also protect their heart at the same time.”

Professor Chee Kok Han, who was also at the campaign launch, said diabetes affects about half of heart patients in Malaysia. Persons with diabetes are nearly twice more likely to die from heart disease or stroke compared with those without diabetes. Chee is senior consultant cardiologist at University Malaya Medical Center. [https://www.niddk.nih.gov/health-information/diabetes/overview/preventing-problems/heart-disease-stroke Accessed on 14 August 2019]

The campaign, which is supported by Boehringer Ingelheim, aims to reach as many people as possible through a multi-pronged approach. Campaign poster and educational leaflets in the three major languages will be made available at clinics and hospitals.

On the social media front, For Your Sweetheart is also teaming up with Fatimah Abu Bakar, actor and former journalist; Sharifah Aryana, actor and producer; and Sharifah Amani, actor, writer and director. They will serve as advocates on social media.

A social experiment was carried out by MEMS and MDES to determine Malaysians’ knowledge about the diabetes-heart disease link. The result of the experiment can be viewed at the campaign website foryoursweetheart.my. Two patient stories detailing their experiences living with diabetes can also be accessed on the website.