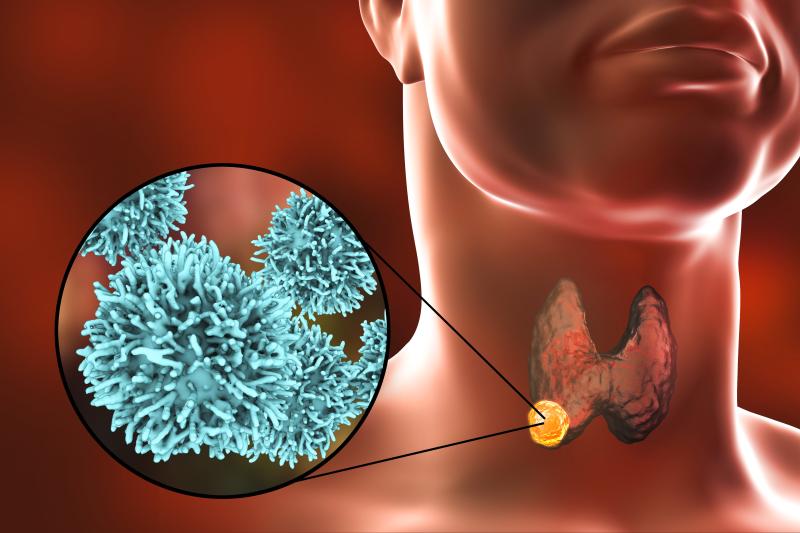 Certain aspects of the patient profile should increase the suspicion for thyroid malignancy, such as male gender, elderly age (above 60 years old), previous radiation exposure, or a family or personal history of thyroid cancers.

Patients commonly present with an asymptomatic swelling in the anterior midline of the neck, often noticed by friends or family first, or a self-palpated lump. The increase in neck ultrasounds performed as part of health screening packages has led to an increase in incidental diagnosis of this cancer. Less frequently, patients can present with local obstructive symptoms such as dysphagia or dyspnoea if the oesophagus or trachea is compressed. Rarely, if the airway has been invaded, they may present urgently with stridor or haemoptysis. Cancer infiltration to the recurrent laryngeal nerve can cause paralysis of the vocal cords with resultant voice hoarseness. If the tumour has spread to the regional lymph nodes, the index presentation can also be that of an isolated cervical lymphadenopathy in the posterolateral triangle of the neck. Rarely, the first manifestation can be bone pain if the disease has widely disseminated with metastasis to the spinal vertebrae.

Aside from clinical examination, evaluation involves a neck ultrasound and needle biopsy of suspicious nodules. Some features that increase the malignant potential of a nodule include large size, calcifications, irregular borders, extrathyroidal extension, nodules that are taller than wide, or associated cervical lymphadenopathy. In 2017, the American College of Radiology released the Thyroid Image Reporting And Data System (TIRADS) scoring system to standardize decision-making on when to perform fine needle aspiration for cytologic testing of thyroid nodules based on their sonographic appearance.

The availability of ultrasound machines in the primary healthcare setting and technological improvements in terms of image resolution and nodule characterization have made the detection of small asymptomatic thyroid nodules easier and more commonplace. This has resulted in rising numbers of thyroid cancer being diagnosed in Singapore, a situation that mirrors the global trend. Most of the additional new cases are papillary microcarcinomas – small tumours measuring <1 cm – of the commonest subtype which portend the best prognosis due to their indolent nature. As such, despite an increasing incidence, the mortality rates from thyroid cancer have remained low. This has drawn criticism regarding the utility and cost-effectiveness of thyroid cancer screening, with overdiagnosis being associated with more drawbacks than actual benefit. In Korea where there was previously a national screening programme in place, such a practice is now discouraged.

In recent times, the concept of active surveillance for papillary microcarcinomas has been espoused as an alternative to curative surgery by some hospitals in Japan and the US. Active surveillance is done through close follow-up at regular intervals with serial ultrasound examinations to monitor for disease progression. In the case of progression, the patient will be referred for further treatment. Young age and pregnancy have been identified as risk factors for disease progression and make a candidate less ideal for this programme. Active surveillance has only been adopted in a few dedicated thyroid centres, usually under the auspices of a clinical trial, for a highly select group of patients, with multidisciplinary team support for the close follow-up needed. There is no conclusive long-term evidence to support the oncological safety or compare patient outcomes with the currently established standard.

Role of the GP

GP involvement is essential for timely diagnosis of thyroid cancer as the cancer is typically silent and patients themselves may not notice any change in their appearance if the lump is small or the neck swelling has been long-standing. Direct presentation to the emergency department is very unusual. At present, screening for thyroid cancer is not part of the national screening programme for the general public, but a heightened index of suspicion should alert primary healthcare providers to further investigate or refer the patient to a tertiary care centre if the patient belongs to any of the above risk categories or presents with earlier mentioned symptoms.

Treatment modalities for thyroid cancer include surgery, radioactive iodine (RAI), radiotherapy, and systemic treatment including targeted therapy, depending on the stage and subtype of disease. Surgery is curative for the majority of well-differentiated thyroid cancers, namely papillary and follicular thyroid cancer.

RAI can be used as an adjunct or to ablate remnant microscopic disease especially in high-risk cases. While RAI appears to be a reasonably safe therapy, it is associated with a cumulative dose-dependent risk of early and late complications, such as salivary gland damage causing dry mouth or painful swollen glands, nasolacrimal duct obstruction causing epiphora, dental caries, and secondary malignancies in the long run.

The treatment of medullary thyroid cancer is mainly surgical extirpation, as it is not typically responsive to RAI. It arises from the parafollicular C cells of the thyroid gland, which produce calcitonin that is used as a serum tumour marker to monitor for disease progression or recurrence. Screening for familial syndromes such as Multiple Endocrine Neoplasia (MEN2) and its associated tumours like phaeochromocytoma, primary hyperparathyroidism, and mucosal neuromas should also be done before the operation is undertaken.

For locally invasive thyroid cancer with involvement of the aerodigestive tract, gross disease may be left behind intra-operatively in an attempt to preserve the airway, speech, and swallowing function, with external beam radiotherapy administered after. Radiotherapy can also be used as treatment for the rare thyroid lymphoma, or as palliation for the highly aggressive anaplastic thyroid cancer.

Chemotherapy has historically produced disappointing results in patients with well-differentiated thyroid cancer but too little data exist to recommend specific cytotoxic regimens, and use within the context of a clinical trial is preferred. Targeted therapy with tyrosine kinase inhibitors can be considered in symptomatic patients with metastatic, rapidly progressive disease that is not amenable to any other treatment, but its use must be cautiously weighed against the numerous possible adverse side effects, including fatigue, nausea, diarrhoea, hypertension, hepatotoxicity, and weight loss.

Following surgery or after the completion of RAI therapy, patients are given thyroid hormone replacement. The dose of thyroxine and its corresponding degree of thyroid stimulating hormone (TSH) suppression needed would depend on the risk category that the patient falls into. There are numerous prognostication systems that stratify the patients into low-, intermediate-, or high-risk groups depending on variables such as age, tumour size, grade of tumour differentiation, and extrathyroidal extension, to predict for the risk of disease recurrence, and guide subsequent management.

Stable patients with no evidence of recurrence may opt to be discharged back to their primary healthcare providers. At follow-up, patients are monitored for compliance to thyroxine medication, and manifestations of symptomatic hyper- or hypothyroidism that may require dosage adjustment. Serum thyroglobulin functions like a tumour marker should be serially measured to prompt further evaluation for structural disease recurrence with neck ultrasound scans for those with elevated or uptrending titres. As papillary thyroid carcinoma is an indolent disease, recurrences may occur many years after the index presentation, usually loco-regionally, warranting continued surveillance.

For patients experiencing treatment-related side effects, simple GP-led interventions, aside from medications, can improve their symptoms. For example, gentle stretching and strengthening exercises could help patients with postoperative neck and shoulder stiffness. Increased hydration and sialogogues like sour candy or lemon juice could help those with acute transient change in taste or dry mouth following RAI therapy or radiation. Effective pain relief can be achieved from local application of ice in addition to analgesia for patients with acute sialadenitis.

Thyroid cancer management in Singapore is based on published international guidelines from the National Comprehensive Cancer Network (NCCN), American Thyroid Association, British Thyroid Association, and the American Joint Committee on Cancer, but is also individualized to every patient’s needs and takes into context local healthcare resources and constraints.

In conclusion, thyroid nodules are common in young women. It is important to be on the lookout for an anterior midline neck swelling during any clinical examination, as patients are usually asymptomatic. Most thyroid cancers are highly treatable and curable with excellent prognosis if diagnosed early. At present, there is no strong evidence to support performing routine screening ultrasound scans of the neck as this may lead to overdiagnosis without significant beneficial impact on patient outcomes. However, if this is done and nodules are detected, patients should be referred to the thyroid surgeon for treatment, even if the thyroid nodules are small, because active surveillance is not yet a universally accepted alternative in current practice. Lastly, it is vital to have a common understanding and shared care plan between specialists and GPs, to manage long-term side effects of cancer treatment and also remain vigilant for late cancer recurrences.