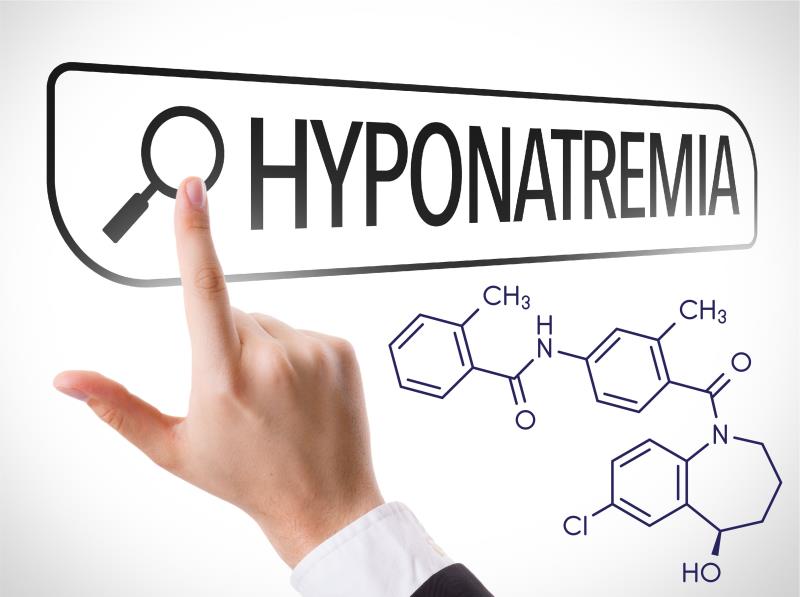 Introduction
Hyponatraemia has been associated with poor outcomes in patients with heart failure (HF).1 Tolvaptan is an oral, selective V2 receptor antagonist, indicated for the treatment of clinically significant hypervolaemic or euvolaemic hyponatraemia (associated with HF or syndrome of inappropriate antidiuretic hormone secretion [SIADH]) with either a serum Na+ concentration <125 mmol/L or less marked hyponatraemia that is symptomatic and resistant to fluid restriction.2 Trials have demonstrated the efficacy of tolvaptan for augmenting diuresis when administered with furosemide for management of congestive HF.2,3 The following case studies illustrate the use of tolvaptan in this setting.

History and presentation
The patient is a 69-year-old Chinese man with a history of type 2 diabetes, hypertension and hyperlipidaemia, severe aortic stenosis, peripheral arterial disease, and triple vessel coronary artery disease with a left ventricular ejection fraction (LVEF) of 20 percent. Previously treated at another hospital, he presented to the National Heart Centre on 4 Mar 2021 with shortness of breath, orthopnoea, and paroxysmal nocturnal dyspnoea.

Treatment and response
The patient was given IV furosemide 40 mg twice daily for HF. A week later, he had worsening hyponatraemia (Figure 1). Furosemide was suspended and he was given 1L of normal saline infusion on 10 and 14 Mar. However, his Na levels continued to decline. On 15 Mar, he was referred to an endocrinologist, who ruled out SIADH. The patient’s serum osmolality was 272 mmol/kg, urine osmolality was 354 mmol/kg, and urine Na was <10 mmol/L, which was consistent with hypo-osmolar (hypervolaemic) hyponatraemia. 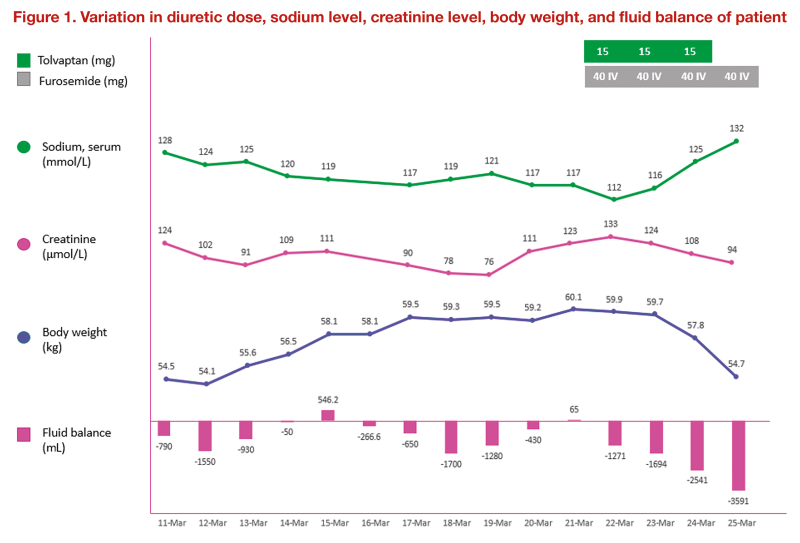 No furosemide was given from 10 to 21 Mar despite the patient still in volume overload state as there was fear of worsening hyponatraemia. On 22 Mar, he was referred to the HF team. He still had symptoms of volume overload, with pitting oedema up to the mid-shin, and cool peripheries. He was clinically classified as “cold and wet”, suggesting that his perfusion status was impaired and congestion was present. He was given IV dobutamine 3 mcg/kg/min, furosemide 40 mg twice daily, and tolvaptan 15 mg every morning (om) from 22 to 24 Mar, and was allowed to drink liberally. IV dobutamine and IV furosemide were continued on 25 and 26 Mar. The patient improved clinically and had good diuresis, was euvolaemic, and Na levels normalized. He was switched to oral furosemide 40 mg twice daily on 27 Mar.

Conclusion
Overall, tolvaptan is an effective and safe aquaretic for patients with fluid overload with hyponatraemia <125 mmol/L to achieve euvolaemia and correct hyponatraemia. Tolvaptan was well-tolerated, and the patient did not report any adverse effects.

History and presentation
The patient was a 94-year-old woman with a significant cardiac history of hypertension and atrial fibrillation, admitted for fall with a femoral neck fracture to the Orthopaedics department. Pre-operative cardiac risk assessment was conducted; 2D echo showed mild biventricular systolic impairment and moderate functional tricuspid regurgitation. Two days after a successful left hip hemiarthroplasty, she was noted to be in mild congestive cardiac failure with bibasal crepitations and elevated jugular venous pressure. Her oral intake was poor and her input/output charts were quite balanced. Her Na level was 127 mmol/L and creatinine level was 77 μmol/L.

Treatment and response
She was started on oral furosemide, with the dose (20–40 mg) titrated daily as per her clinical condition. However, her Na level continued to drop to 119 mmol/L and she became increasingly symptomatic. A cardiology input was consulted again, and the patient was noted to have a worsening HF. Her BNP level was 512 pg/mL. Her weight as an inpatient had also increased from 44.6 kg to 46.6 kg. A focused lung ultrasound showed significant B-lines bilaterally and a pleural effusion. She was given a dose of IV furosemide 40 mg. That gave her a net negative balance of 1,360 mL. Despite the diuresis, her Na level hovered around 119 mmol/L and she still had shortness of breath.

Based on her clinical progress, it was decided that she would require more aggressive diuresis and better preservation of Na levels. On 24 Sep, she was given a combination of tolvaptan 7.5 mg and IV furosemide 40 mg (Figure 2). The next day, the patient mentioned that her breathlessness has improved. Her net negative balance was 3,400 mL and her weight had dropped to 42.9 kg. Her bedside ultrasound showed an improvement in the B-lines although they were still present. Her serum Na had risen dramatically to 126 mmol/L and creatinine was 61 μmol/L.

Due to concerns of rapid rise in Na, diuretics were withheld for a full day. Her Na remained at 126 mmol/L the next day and she was still in HF. She was given a single dose of IV furosemide 40 mg but the urine response was not as ideal. Na level also decreased to 124 mmol/L. On 27 Sep, she was given another dose of tolvaptan 7.5 mg with furosemide 20 mg, which improved the net negative fluid balance to 1,700 mL. Her weight dropped further to 41.7 kg, Na was 126 mmol/L, and creatinine was 56 μmol/L.

She was then prescribed tolvaptan 7.5 mg om along with either oral or IV furosemide 40 mg om based on clinical status, ultrasound findings, and laboratory results. Tolvaptan was well-tolerated, with the main adverse event being the rapid rise in Na levels mainly during the first dose. As a precaution, Na levels were monitored daily, and diuretic dose was titrated accordingly. She received a total of 11 doses of tolvaptan 7.5 mg on separate days. Her symptoms improved and she was discharged to a rehabilitation hospital. Eventually, she was put on furosemide 60 mg bd for maintenance diuresis.

Discussion
The starting dose of tolvaptan is dependent on the starting level of Na, renal function, and previous response to diuretics. Patients with lower Na levels at baseline, and who respond well to diuretics are most likely to manifest a dramatic jump in Na levels. Lower doses of tolvaptan should be administered to such patients. Concomitant diuresis should also be given judiciously. The converse is also true. Patients with less severe hyponatraemia and extremely diuretic-resistant will likely need higher starting doses and multiple combination therapy to achieve ideal diuresis.