Managing comorbidities in rheumatoid arthritis in the new decade 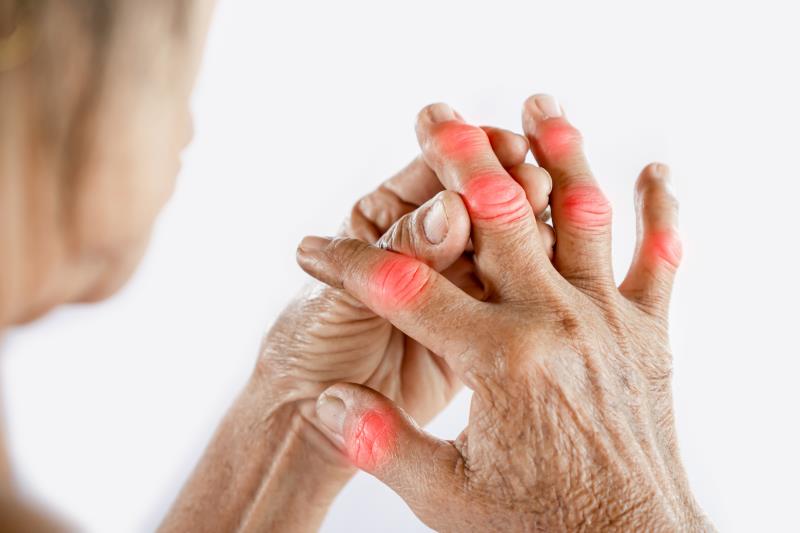 Nearly half of all rheumatoid arthritis (RA) patients suffer comorbidity, which has a negative impact on quality of life and mortality. At a recent scientific symposium, Professor Peter Taylor from the University of Oxford in Oxford, UK emphasized the importance of monitoring, preventing, and treating comorbidities in RA while Professor Christopher Edwards from the University Hospital Southampton in Southampton, UK focused on the impact of mental health in RA. The symposium was organized by Fresenius Kabi and held under the auspices of the Singapore Society of Rheumatology. Dr Lian Tsui Yee from Tan Tock Seng Hospital, Singapore chaired the event.

Comorbidities impact patient outcomes in RA
Following the advent of highly effective medications such as biologics and implementation of treat-to-target strategies, the prognosis of RA has greatly improved, with declines in the rates of extra-articular manifestations, work-related disability, surgery, and mortality. [Rheumatology (Oxford) 2012;51:338-346; Hand 2015;10:272-278; J Rheumatol 2008;35:1950-1957] Despite these advances, the prevalence of comorbidities in RA remains high, owing to the systemic and chronic nature of the disease. [Ann Rheum Dis 2014;73:62-68]

“Some comorbidities are linked to systemic inflammation of RA, others are linked to the treatment of RA, while some are completely independent. Some conditions could have a possible aetiology from any of the above, for example, osteoporosis,” said Taylor. “Comorbid conditions impact the well-being of people living with RA, and may have enormous influence on patient outcomes, on top of personal, family and societal costs.”

“It is completely unsurprising that patients with a higher number of comorbidities experience a lower quality of life (QoL, measured by EuroQol-5D), and suffer from more functional disability (measured by the Health Assessment Questionnaire),” said Taylor. [Best Pract Res Clin Rheumatol 2007;21:885-906] 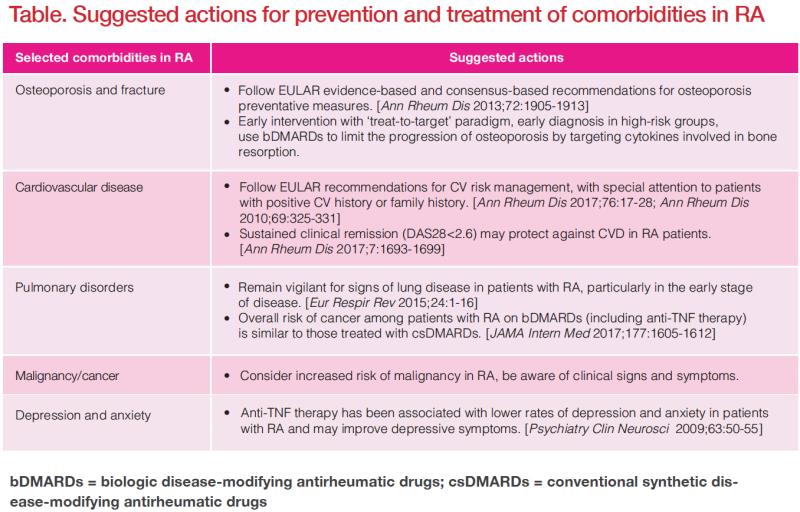 There are several international guidelines (eg, European League Against Rheumatism or EULAR) on the prevention, detection, and control of comorbidities in patients with RA. In particular, comorbidities such as cardiovascular disease (CVD), malignancy, osteoporosis, peptic ulcer, infection, and depression should be carefully assessed and managed, and subjected to a standardized systematic periodic review. [Ann Rheum Dis 2016;75:965-973] There was a wide variability among countries in the prevalence of comorbidities and compliance with recommendations, with considerable proportions of patients not optimally monitored. [Ann Rheum Dis 2014;73:62-68]

Impact of RA on mental health
“Most physicians concentrate on treating RA as a synovial joint disease, sometimes at the expense of other aspects. RA not only affects patients’ joints but also their mental health, cognitive function, social life, and QoL,” said Edwards.

The EULAR definition of difficult-to-treat RA includes presence of “symptoms that are causing a reduction in QoL”, and “signs or symptoms perceived as problematic by the rheumatologist or the patient”, despite being well-controlled in other aspects. [Ann Rheum Dis 2021;80:31-35]

Importantly, the role of depression and anxiety in difficult-to-treat RA should be considered, he added. Mental health and disease activity are interconnected in RA (Figure). Chronic pain, fatigue, and inflammation in RA act as stressors and impact mental health via changes in cognitive appraisal, mood, and behavioural coping responses. Patients who have negative cognitive appraisal tend to lack active coping strategies such as medication adherence and exercise, which may increase the severity of the disease itself. [Nat Rev Rheumatol 2016;12:532-542] 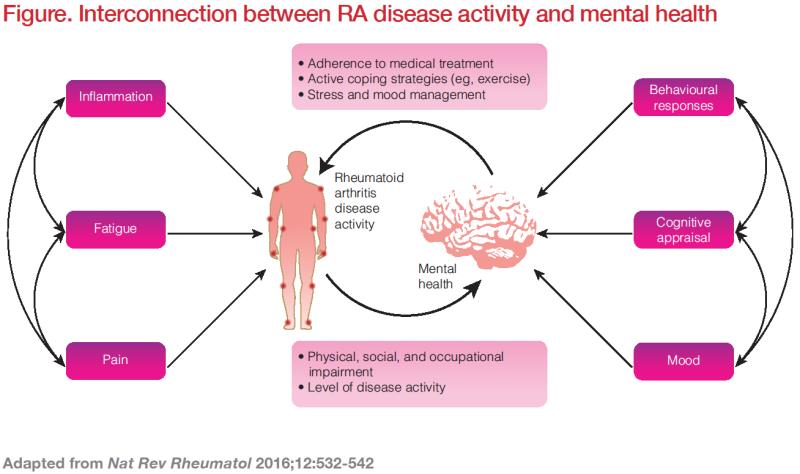 Studies suggest that systemic inflammation directly affects the brain and may be related to clinical progression in Alzheimer’s disease (AD), cognitive decline, and depression. [Nature 2018;556:426-428; Neurology 2009:73:768-774] Systemic inflammation in RA has been linked to structural changes in brain networks, which predict symptoms such as fatigue, pain, and cognitive dysfunction. [Nat Commun 2018;9:2243]

Increasing evidence points to common inflammatory pathways between RA, cognitive disorder, and depression. Inflammatory cytokines such as tumour necrosis factor-alpha (TNF-α) and interleukin-6 (IL-6) may be elevated in people with depressive disorder and AD. [Curr Opin Rheumatol 2019;31:279-284; J Affect Disord 2012;139:230-239; Neurology 2011;77:212-218] An analysis of 57 trials of biologic treatment in RA showed a relatively small but significant impact of bDMARDs (including TNF and JAK inhibitors) on mental health as assessed by the SF-36. [Arthritis Rheumatol 2018;70:1377-1391]

“Mental health could be a reason for resistant or difficult-to-treat disease. While treatment with biological therapies and JAK inhibitors have shown effects on pain, fatigue, and function, effective pharmacology alone is not sufficient to improve mental health outcomes for most RA patients. It is therefore important to direct patients to appropriate therapies for mental health problems,” said Edwards.