The management of multidrug-resistant (MDR) infections in children is complex, with limited studies and a relative lack of approved new antibiotics with paediatric indications.

At a recent Meet-the-Expert session, Dr Louis Grandjean, Consultant in Paediatric Infectious Diseases at Great Ormond Street Hospital and Associate Professor at University College, London, UK, addressed the growing threat of MDR infections in children and discussed treatment strategies and options for management. He focused on ceftazidime-avibactam (CAZ-AVI, Zavicefta®), whose approval in Singapore was recently expanded to include paediatric patients aged 3 months and older.

The burden of gram-negative antimicrobial resistance in children
Globally, the rates of gram-negative antimicrobial resistance (AMR) are increasing, and result in significant morbidity and mortality. “There remains a perception that AMR rates are far lower in children compared with adults, but there is no routinely collected dataset to allow a direct comparison,” said Grandjean.

Gram-negative AMR in Singapore
National surveillance data in Singapore indicate that CRE is on the rise. [Microorganisms 2016;4:13] Approximately 75 percent of CRE in Singapore are carbapenemase producers (CPE). All three dominant carbapenemase genes – blaNDM, blaKPC, and blaOXA-type – are found in Singapore, with recent unpublished data indicating that OXA-48 is the predominant gene in the country. [Clin Infect Dis 2017;64(suppl_2):S68-S75]

Treatment strategies and options for MDROs
“Rapid diagnostics is an important tool for guiding empiric treatment choice,” emphasized Grandjean. Advanced rapid diagnostic tests, such as immunochromatographic assays or on-demand polymerase chain reaction (PCR) assays, improve the detection as well as determine the mechanism of carbapenem resistance to enable physicians to select the most appropriate antibiotics early in the treatment of gram-negative infections.

Various newer agents have been proposed for the treatment of MDR organisms (MDROs; Table 1), in particular, ceftazidime-avibactam (CAZ-AVI), a newer cephalosporin/β-lactamase inhibitor combination with a broad antibacterial spectrum. Locally, CAZ-AVI is indicated in adults and has recently been approved for use in paediatric patients aged 3 months and older for the treatment of complicated intra-abdominal infection (cIAI), complicated urinary tract infection (cUTI), including pyelonephritis, and hospital-acquired pneumonia (HAP), including ventilator-associated pneumonia (VAP). 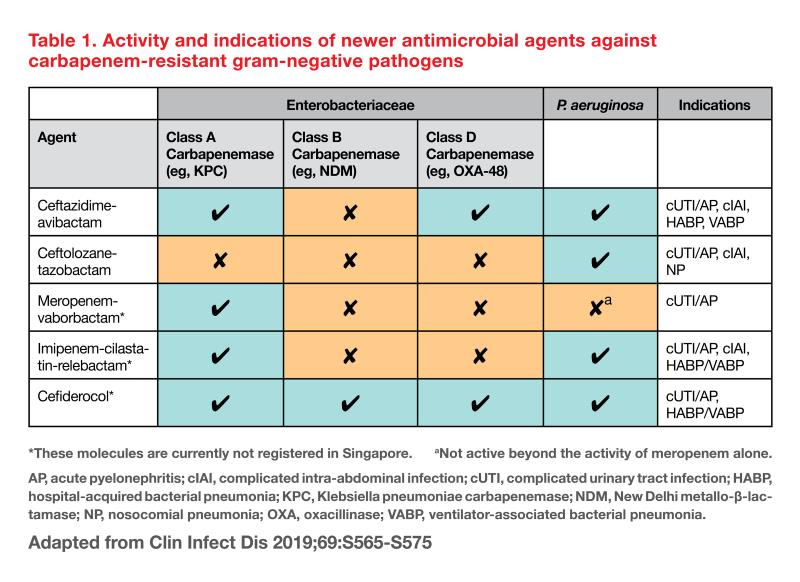 The clinical efficacy of CAZ-AVI vs colistin against Klebsiella pneumoniae carbapenemase–producing CRE infections was demonstrated in CRACKLE (Consortium on Resistance Against Carbapenems in Klebsiella and other Enterobacteriaceae), a prospective, multicentre, observational study. The majority of patients had bloodstream (n=63; 46 percent) or respiratory infections (n=30; 22 percent). A lower proportion of patients treated with CAZ-AVI died in the hospital, and a higher proportion of them got discharged home at Day 30 vs those treated with colistin. [Clin Infect Dis 2018;66:163-171]

Efficacy in paediatric cIAI
In a single-blind, multicentre, phase II study, 88 children (age ≥3 months to <18 years) with cIAI were randomized 3:1 to receive intravenous (IV) CAZ-AVI plus metronidazole, or meropenem, for at least 72 hours, with an option to switch to oral therapy thereafter for a total treatment duration of 7–15 days. Favourable clinical/microbiologic responses were observed in ≥90 percent of patients in both treatment groups at the end-of-intravenous treatment and test-of-cure visits, demonstrating that CAZ-AVI plus metronidazole was not inferior to meropenem. [Pediatr Infect Dis J 2019;38:816-824]

Efficacy in paediatric cUTI
Another phase II study randomized 95 children aged ≥3 months to <18 years with cUTI to IV CAZ-AVI or cefepime (3:1) for ≥72 hours, with optional switch to oral therapy on Day 4, for a total treatment duration of 1–2 weeks. In the microbiologic intent-to-treat analysis set, favourable clinical response rates remained at 88.9 percent for CAZ-AVI and 82.6 percent for cefepime at test-of-cure. Favourable per-patient microbiologic response at test-of-cure was 79.6 percent (CAZ-AVI) and 60.9 percent (cefepime). [Pediatr Infect Dis J 2019;38:920-928]

Safety and tolerability in paediatric patients
CAZ-AVI had a similar safety and tolerability profile in paediatric patients to that observed in adults with cIAI and cUTI. In both paediatric trials, the adverse event profile of CAZ-AVI was similar to comparator therapies. The most common adverse reactions (>3 percent) with CAZ-AVI were vomiting, diarrhoea, rash, and infusion site phlebitis. There were low rates of discontinuation due to adverse effects, and no deaths were reported in either study.

Conclusion
“In the context of the increasing prevalence of multidrug-resistant gram-negative pathogens in children, evidence supports CAZ-AVI as a potential treatment option. However, it is important to carry out CAZ-AVI antibiotic susceptibility testing for CRE isolates and maintain vigilance for emerging resistance while on therapy,” said Grandjean. 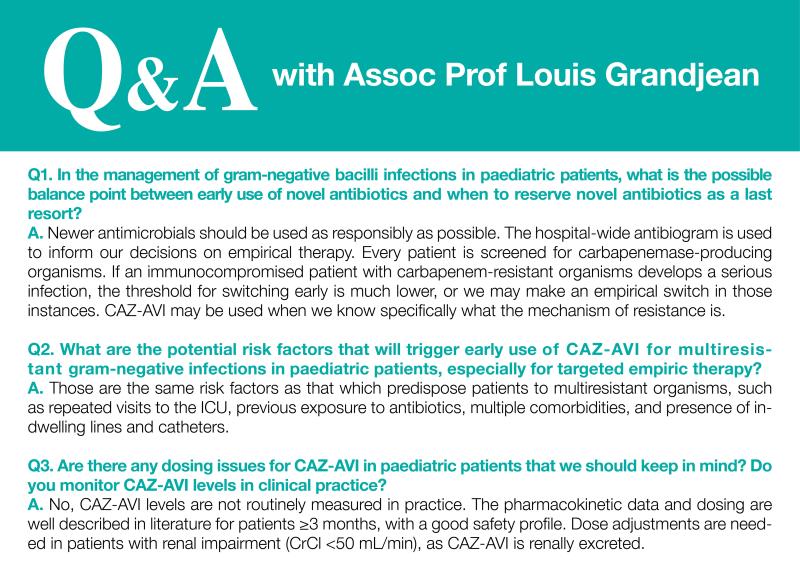