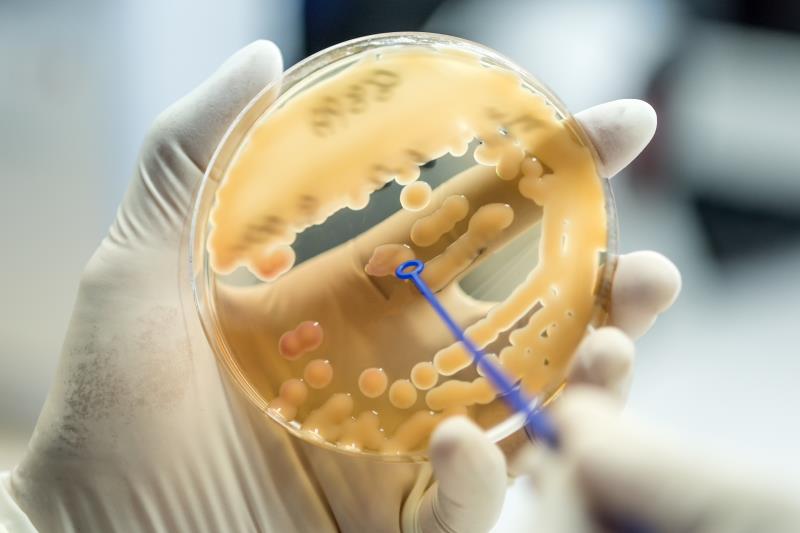 “Across the Asia-Pacific region, many people in the community now carry ESBL-producing organisms in their gut. When they get infections such as peritonitis or early hospital-acquired infections, it is often due to an ESBL-producer,” said Paterson.

A meta-analysis found that ceftazidime-avibactam may be a carbapenem-sparing option for the treatment of mild-to-moderate complicated urinary tract and intra-abdominal infections caused by ESBL-producing Enterobacterales species. [Antimicrob Agents Chemother 2020;65:e01052-20]

Ceftazidime-avibactam meets most of the characteristics of an ideal beta-lactam/beta-lactamase inhibitor combination. “Ceftazidime is a well-trusted beta-lactam with proven safety profile and excellent antipseudomonal activity. Avibactam inhibits most beta-lactamase types including ESBLs, AmpC beta-lactamases of Enterobacter and Pseudomonas, as well as KPC and OXA-48 carbapenemases produced by carbapenem-resistant Enterobacteriaceae (CRE),” said Paterson. “However, it is not active against metallo-beta-lactamases, such as NDM.”

Clinical efficacy of ceftazidime-avibactam vs carbapenem
Ceftazidime-avibactam demonstrated noninferiority to meropenem for the treatment of hospital-acquired pneumonia and ventilator-associated pneumonia (HAP/VAP) in the REPROVE study. Clinical cure rates were similar for both arms in the clinically evaluable (CE) population and the clinically modified intention-to-treat (cMITT) population (Figure 1). [Lancet Infect Dis 2018;18:285-295] 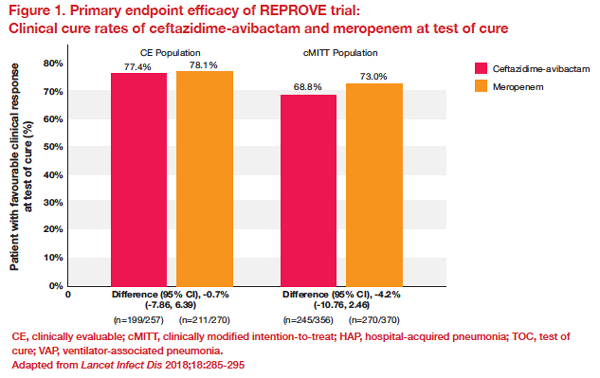 “When treating ICU patients, it is helpful to use a 4-point algorithm to inform empiric antibiotic decisions: (1) prior microbiologic isolates from the patient, (2) prior antibiotics used by the patient, (3) duration of ICU stay, and (4) the current epidemiology including outbreaks,” said Paterson.

He illustrated this with a hypothetical case example of a 65-year-old man with septic shock, whose past medical history included hypertension, smoking, type 2 diabetes, and benign prostatic hypertrophy. He received Cefazolin perioperatively for coronary artery bypass grafting (CABG), with very slow wean. He was mechanically ventilated and was diagnosed with pneumonia (Figure 3).

Discussion
Situation 1: “Piperacillin/tazobactam is appropriate for some patients with very early hospital-acquired pneumonia but not beyond that for widespread use in established VAP,” said Paterson. Based on the MERINO study, meropenem is a proven choice. Beta-lactam/beta-lactamase inhibitor combinations with activity against ESBL-producers are potential carbapenem-sparing options. However, data are still lacking for bloodstream infections.

Situation 2: A prolonged ICU stay increases the risk for resistant organisms. “Unfortunately, many agents are not effective against carbapenem-resistant Acinetobacter. It is usually treated with amikacin, polymyxin B, and colistin, none of which are great options,” said Paterson.

Situation 3: Ceftazidime-avibactam and ceftolozane-tazobactam are active against most carbapenem-resistant P. aeruginosa. “In my opinion, ceftazidime-avibactam would appear most appropriate as a therapy against Klebsiella or Pseudomonas where there is suspected or proven resistance to meropenem,” said Paterson.

Conclusion
“It is important to consider the “resistance risk” when choosing an empiric therapy for seriously ill patients. If there is a risk of ESBL-producers, meropenem is preferred. If the risk is for carbapenem resistant Pseudomonas, ceftolozane-tazobactam or ceftazidime-avibactam are potential options. For KPC or OXA-producing CRE, ceftazidime-avibactam is a good choice,” said Paterson.