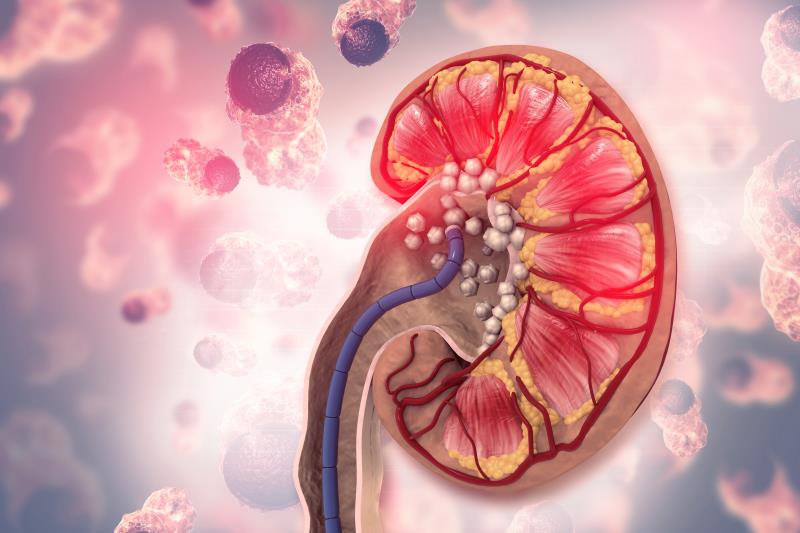 The RNAi* therapeutic agent lumasiran demonstrated favourable clinical outcomes for primary hyperoxaluria type 1 (PH1) in both paediatric and adult patients, according to the results of the phase III ILLUMINATE-A and ILLUMINATE-B trials presented at PAS 2021.

PH1 involves overproduction of oxalates that may lead to the formation of kidney stones, NC, progressive kidney disease, and multiorgan damage which may eventually require liver and kidney transplants, said Sas. The procedures and hospitalizations associated with stone removal are a primary cause of morbidity in PH1. [Clin J Am Soc Nephrol 2020;15:1056-1065l]

At 6 months, NC grade improved in four lumasiran recipients (one bilateral, three unilateral) vs none in the placebo arm. NC grade worsening was seen in one participant in each treatment arm. The number of participants whose NC grades remained stable were 29 and 11 in the respective lumasiran and placebo arms.

Among those with available ultrasounds at 6 (n=27) and 12 months (n=14), improvements were seen in four and 11 participants, respectively. Of these, eight patients had improvements in both kidneys at 12 months.

Compared with the previous 12-month results, among those who received lumasiran at baseline, RSE rates dropped during the first 6 months of lumasiran treatment (from 3.19 to 1.09/person-year), and was sustained at 12 months (0.85/person-year). For those who crossed over from placebo, a drop in RSE rate was evident at month 12 (from 0.54 to 0.17/person-year).

At 6 months, eight participants had NC grade improvements (three bilateral, five unilateral). NC grades remained stable in 10 individuals. No worsening was observed. The RSE rate from the previous 12 months was sustained through month 6 (0.24 per person/year).

“Due to the causal role of urinary oxalate in kidney stone formation, NC, and kidney function decline, a substantial reduction in urinary oxalate levels is expected to confer clinical benefit in patients with PH1 … [Moreover, the NC] improvements are important as there is evidence that the presence of NC is a risk factor for progression of chronic kidney disease in PH1,” explained Sas.

The 54-month extension phase of both trials is anticipated to reflect more data on the effect of lumasiran on kidney function, RSEs, and NC.