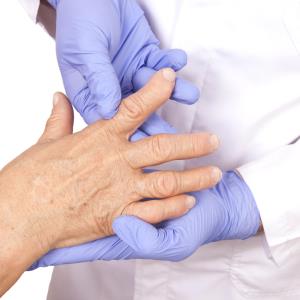 From November 2018 to March of this year, the local market has been hit by a series of drug recalls for eight brands of pharmaceutical products containing angiotensin II receptor blocker (ARB) losartan. The recalls were issued due to unacceptable levels of contamination by nitrosamine impurities, which may pose a human cancer risk.

MIMS reached out to the National Pharmaceutical Regulation Agency (NPRA) and the Pharmaceutical Services Division (PSD) at the Ministry of Health to obtain further details. The following is an edited version of the response received.

Were the losartan products recalled only those from Hetero Labs or from other manufacturers/countries as well?

The NPRA has received reports regarding detection of nitrosamine impurities and suspension of Certificate of Suitability for two active pharmaceutical ingredients (API) manufacturers by the European Directorate for the Quality Of Medicines & Healthcare (EDQM). 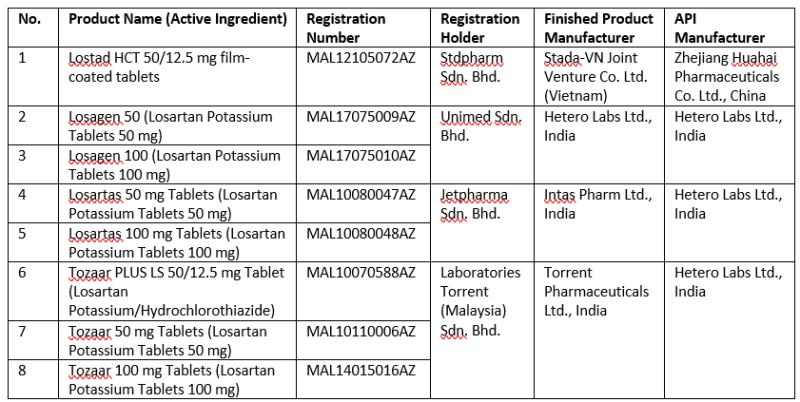 Were the contaminants found in any locally produced pharmaceutical products?

(Eds Note: While the FDA recalls also included valsartan products as well as other brands of losartan products, these were not on the Malaysian market to begin with.)

How do nitrosamines enter the production process?

Nitrosamine impurities, which include N-Nitrosodimethylamine (NDMA), N-Nitrosodiethylamine (NDEA), N-Nitrosodibutylamine (NDBA) and N-nitroso-N-methyl-4-aminobutyric acid (NMBA) can be formed during the manufacturing of certain APIs that contain a specific ring structure—known as a tetrazole ring—under certain conditions and when certain solvents, reagents, and other raw materials are used. These APIs include angiotensin II receptor blockers (ARBs), also known as the sartan drugs.

What is considered an unsafe level of nitrosamine contamination?

While the goal is to have no detected nitrosamine impurities in any ARBs, interim limits (Table 2) have been set by the US Food and Drug Administration (US FDA) for NDMA, NDEA and NMBA in line with current international guidelines.

(Ed’s Note: According to the FDA, the interim limits are a short-term measure to avoid a possible ARB supply shortage.)

What is the absolute increase in cancer risk from contaminated losartan?

Currently available information shows that the risk of nitrosamine impurities to patients based on the maximum possible exposure appears to be low, but it does not diminish the significant effect of nitrosamine impurities as carcinogens, and so their presence in drug products is not acceptable.  There are other factors to consider, eg, length of exposure and potency level of the said agents.

That is why the US FDA has evaluated safety data for these impurities to determine interim acceptable intake levels in the ARB class of medicines (see Table 2).

While consumers should limit exposure to these nitrosamine impurities, they also exist in other ingested products, such as some charcoal grilled food items. The goal is to balance the risk of patients ingesting low levels of the impurities (below interim acceptable levels) for a short period of time against the risk of shortage of certain ARBs, which may impact patients’ health if discontinued abruptly.

Participants in the study had no history of cancer prior to the study and were either using valsartan at commencement or initiated during a subsequent 5-year period. According to the researchers, “the results do not imply a markedly increased short-term overall risk of cancer in users of valsartan contaminated with NDMA. However, uncertainty persists about single cancer outcomes, and studies with longer follow-up are needed to assess long-term cancer risk.”)

How does cancer risk from nitrosamines compare to other common carcinogens (eg, smoking)?

The level of risk associated with a carcinogenic agent depends on both the potency and the level of exposure to that agent. Carcinogenic potency can be estimated using clinical and epidemiologic data on humans or toxicologic data derived from animal bioassays. For now, we do not have accurate data of comparison of nitrosamine impurities with other carcinogens.

What should people do?

Healthcare professionals need to alert and educate patients on the recent information of the products involved. It is important to help patients identify the seven confirmed brands and advise on the short-term and long-term exposure risk of carcinogen to keep the public informed and assured.

However, patients on ARBs should also be advised not to abruptly stop taking their medications as it may increase their risk of stroke or myocardial infarction.

Any patients in possession of the affected losartan products can bring them to the facilities where the products were supplied for further action. According to the MOH registered product database, there are 32 brands registered with the NPRA that can be used to replace the recalled seven brands.

If patients are uncertain, they are advised to see their current physicians or to directly call the National Pharmacy Call Centre (Pusat Panggilan Farmasi Kebangsaan) on the toll-free line 1800 88 6722, which is available Mondays to Fridays 8 am to 5 pm, except on public holidays.

Suppliers and product registration holders are responsible for product recalls and to ensure the products are no longer available in the market.