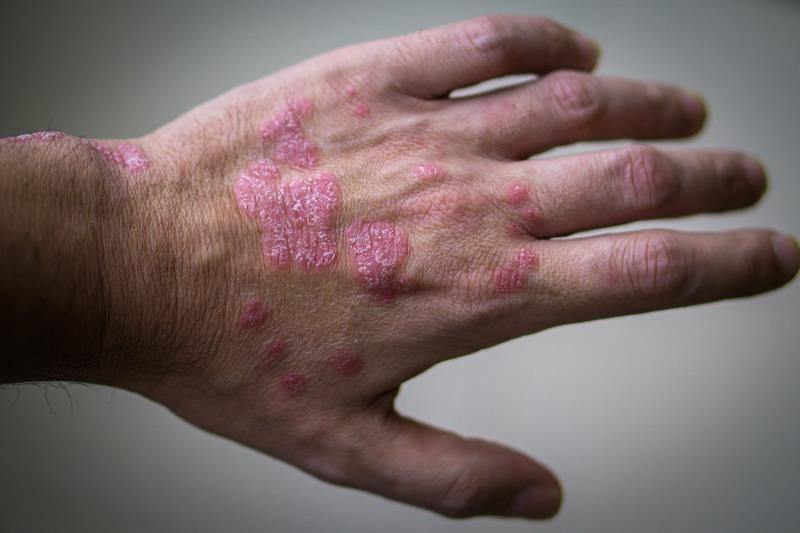 The humanized immunoglobulin G1 monoclonal antibody risankizumab conferred long-term benefit for individuals with active psoriatic arthritis (PsA) who had inadequate responses to biologic and conventional synthetic DMARDs* (csDMARDs), according to the open-label extension (OLE) phase findings of the KEEPsAKE 1 and 2 trials presented at EADV 2021.

“[C]ontinuous risankizumab markedly improved signs and symptoms of PsA, with efficacy responses maintained through 52 weeks of treatment [in this patient setting]. Risankizumab was generally well-tolerated, with a consistent long-term safety profile that remained stable from week 24 through week 52,” said the researchers.

Regarding physical function improvements at 1 year, patients on risankizumab reported a mean reduction from baseline HAQ-DI*** scores of 0.41 [KEEPsAKE 1] and 0.26 [KEEPsAKE 2]. These were similar to the week-24 reductions of 0.31 and 0.22, respectively.

Two-thirds of patients# on risankizumab achieved PASI 90## at 1 year (68 and 64 percent in KEEPsAKE 1 and 2, respectively), which were numerically higher than those seen at week 24 (53 percent and 56 percent, respectively).

Furthermore, 55 percent of risankizumab recipients from the pooled KEEPsAKE 1 and 2 cohorts achieved resolution of enthesitis, while 76 percent had their dactylitis resolved at week 52. “Dactylitis is a common [PsA symptom] that can cause severe swelling in the fingers and toes that result in everyday tasks becoming difficult,” said Dr Lars Kristensen from The Parker Institute and Lund University, Copenhagen, Denmark, in a press release. “These results provide important insights on how both biologic-naïve and experienced patients may benefit from treatment with risankizumab.”

Left untreated, PsA may lead to persistent inflammation and joint damage which, in turn, may progress into functional impairment and eventual disability. A medical need thus remains for additional therapeutic alternatives for PsA, especially for those who fail to respond to currently available treatments. [Best Pract Res Clin Rheumatol 2012;26:147-156]

The KEEPsAKE trials are ongoing phase III studies assessing the effects of risankizumab in adults with active PsA who had inadequate response, intolerance, or contraindication to biologic therapies and/or csDMARDs. In the initial 24-week phase of both trials, participants (n=964 [KEEPsAKE 1] and 443 [KEEPsAKE 2]) were randomized 1:1 to receive risankizumab 150 mg or placebo at weeks 0, 4, and 16. By week 24, all patients were on risankizumab 150 mg Q12W through week 208.

Risankizumab is an interleukin-23 (IL-23) inhibitor that selectively blocks IL-23 – a cytokine involved in inflammatory processes – by attaching to its p19 subunit. Evidence has shown a link between IL-23 and chronic immune-mediated diseases, including psoriasis. [Ann Med 2011:43:503-511] Apart from trials on PsA, phase III trials evaluating the effect of risankizumab on other### inflammatory disorders are underway. [clinicaltrials.gov/ct2/show/NCT03105102, clinicaltrials.gov/ct2/show/record/NCT03398148, accessed October 7, 2021]