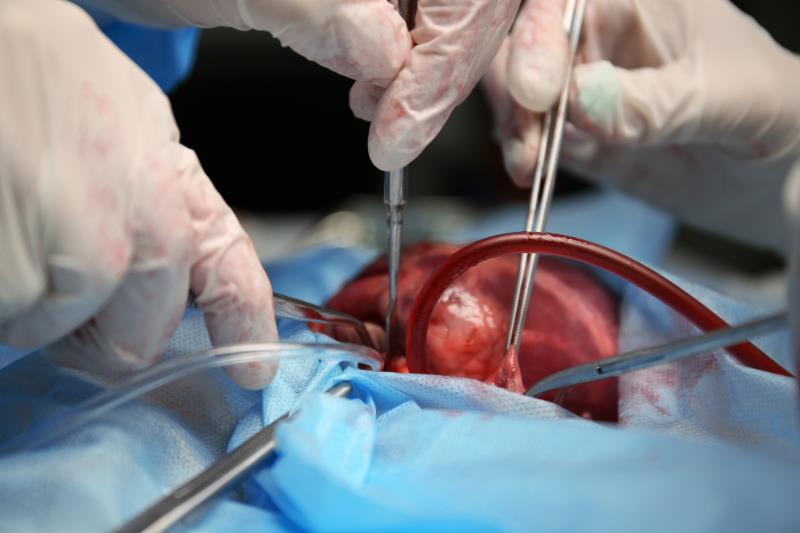 “We were ecstatic to see these results. This is a procedure that’s done once, and it keeps giving a benefit over time. This is going to prevent thousands of strokes,” he added.

Participants in this multinational (105 centres in 27 countries) study were 4,811 adults (mean age 71 years, 67.5 percent male) with a history of AF or flutter who were undergoing surgery for a different cardiac indication and had a CHA2DS2-VASc score of ≥2 (mean 4.2). They were randomized 1:1 to undergo surgical LAAO** or not at time of surgery. Antithrombotic therapy was continued, and patients were followed up every 6 months for a median 3 years, with 76.8 percent of patients remaining on anticoagulant therapy over this period. Ninety-two percent of patients underwent the assigned procedure.

Sixty-seven and 21 percent of patients underwent valve replacement and isolated coronary artery bypass graft, respectively. About half were on oral anticoagulants at baseline. Mean cardiopulmonary bypass time was slightly longer in the LAAO vs non-LAAO group (119 vs 113 minutes; p<0.001), as was mean cross clamp time (86 vs 82 minutes; p<0.001), while fewer patients in the LAAO group had prolonged heart failure hospitalization (HFH; n=5 vs 14; p=0.04).

The number of LAAOs during cardiac surgery needed to prevent one stroke at 5 years was 37.

The results were consistently in favour of LAAO across multiple subgroups including sex, age, history of rheumatic heart disease, heart failure, stroke, or hypertension, type of surgery or anticoagulant, left ventricular ejection fraction, and CHA2DS2-VASc score.

“This study confirms a new paradigm for stroke prevention for patients with AF,” said Whitlock. “The additive benefit of surgical LAAO on top of blood thinners has now been proven. There is no question that patients who are undergoing heart surgery and have elevated stroke risk and AF should have their atrial appendage occluded in their cardiac surgery.”

Despite its benefits for stroke prevention, anticoagulation therapy has multiple drawbacks including incorrect dosing, nonadherence, and the need for medical-related interruptions, the authors said.

“This trial opens a new option for treatment of these patients by layering a mechanical approach – occlusion – on top of a medical approach. Instead of a tension between anticoagulation and occlusion, we need to start thinking about using these as additive approaches when patients are at high risk for stroke,” said Whitlock.

However, concomitant LAAO is not a substitute for anticoagulation, the authors cautioned.