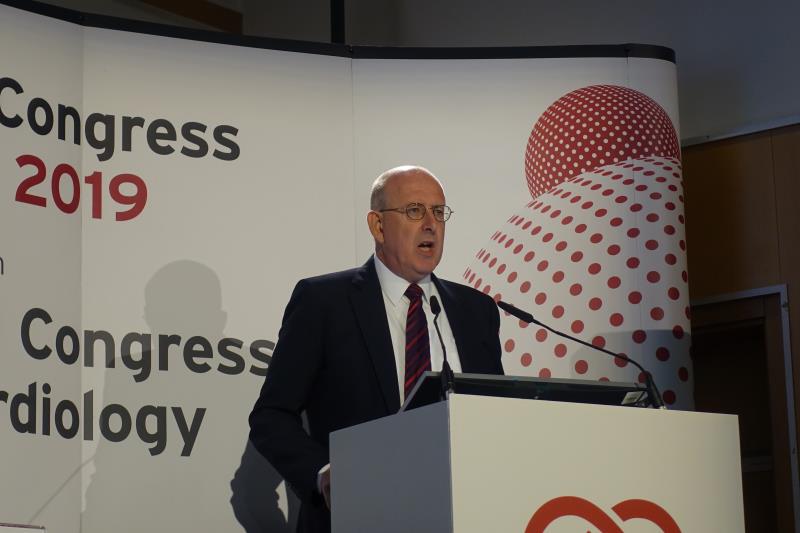 An edoxaban-based dual antithrombotic therapy (DAT) was noninferior to a VKA*-based triple AT (TAT) in terms of bleeding events at 12 months in patients with atrial fibrillation (AF) following a successful PCI**, without compromising the antithrombotic’s efficacy in preventing ischaemic events, the ENTRUST-AF PCI*** study shows.

“AF is a marker of risk [for mortality] in patients undergoing PCI compared with patients without AF,” said invited discussant Dr Renato Lopes of Duke Clinical Research Institute in Durham, North Carolina, US during the ESC 2019 Congress.

Choosing an optimal antithrombotic therapy for patients with AF who had undergone a PCI for an acute coronary syndrome (ACS) therefore presents a clinical challenge. For AF, current guidelines recommend oral anticoagulants to prevent blood clots and stroke; while a DAPT# with aspirin and P2Y12 inhibitors are indicated following a PCI.

“[However,] DAPT in combination with oral anticoagulation [triple therapy] is associated with high rates of bleeding,” explained Professor Andreas Goette from St. Vincenz-Hospital Paderborn in Paderborn, Germany, who presented the findings at ESC 2019.

Previously, three randomized trials have each compared the other NOACs (rivaroxaban, dabigatran, or apixaban) vs VKA on a background of a P2Y12 inhibitor in AF patients undergoing PCI while aspirin was abandoned. The current trial on edoxaban represents the final piece of the puzzle in the series of trials on currently-available NOACs in the setting of AF following a PCI. “ENTRUST-AF PCI adds to the body of evidence in a field where high-quality evidence is desperately needed,” said Lopes.

“Now that the full spectrum of these trials of NOACs is complete, as far as we are aware, few would argue against DAT as the safest regimen,” wrote Drs Davide Capodanno and Dominick J Angiolillo from AOU Policlinico-Vittorio Emanuele, Catania, Italy and the University of Florida College of Medicine in Jacksonville, Florida, US, respectively in a commentary. [Lancet 2019;doi:10.1016/S0140-6736(19)31954-3]

At 12 months, the primary composite endpoint of ISTH##-defined major or clinically relevant non-major (CRNM) bleeding events occurred in 17 percent of patients in the edoxaban arm compared with 20 percent of patients in the VKA arm (hazard ratio [HR], 0.83; p=0.001 for noninferiority). The edoxaban regimen met the primary hypothesis of noninferiority to the VKA regimen, but superiority was not demonstrated.

According to the investigators, the numerically lower rate of the primary bleeding outcome was largely driven by the CRNM bleeding events.

Of note, a post hoc landmark analysis at 14 days showed that there were numerically fewer bleeds with the VKA than the edoxaban regimen in the initial period (HR, 2.42), after which the reduction in bleeding became significant in favour of edoxaban (HR, 0.68).

“The Kaplan-Meier curves showed an unexpected pattern with an unfavourable HR for edoxaban relative to VKA in the first 2 weeks that converted to an HR that continuously favoured edoxaban throughout the remainder of the study period,” observed Lopes.

There were no significant differences in ischaemic events### between the two groups (7 percent vs 6 percent, HR, 1.06, 95 percent confidence interval, 0.71–1.69), indicating that the edoxaban-based DAT was as effective as the VKA-based TAT.

How soon to drop aspirin?

Although the overall ischaemic events were not significantly different between groups, the investigators noted a very early numerical increase in the rates of myocardial infarction and stent thrombosis in patients without aspirin — an observation that was consistent across the other NOAC AF PCI trials.

“It should be noted that, in these trials of NOACs, patients were randomly assigned within 3–14 days of PCI [or 4 hours to 5 days in the case of ENTRUST-AF PCI], a timeframe in which patients were probably given TAT,” Capodanno and Angiolillo pointed out. “[This] inevitably led to questions on the optimal timing of abandoning aspirin.”

“Use of DAT does not imply abandoning aspirin in the peri-PCI period, and a weaning period should be considered as was done in the aforementioned trials [ie, between discharge up to 2 weeks],” they wrote.

“For patients at higher thrombotic potential, such as those undergoing complex PCI or with an ACS, prolonging the duration of aspirin or considering more potent P2Y12 inhibition can be envisaged on the basis of careful weighing of bleeding and ischaemic risk at the individual level,” suggested Capodanno and Angiolillo.

As the majority of patients were on the P2Y12 inhibitor clopidogrel (rather than other more potent forms), Goette said ”our trial must primarily be viewed as a comparison of clopidogrel-based antiplatelet therapies, [as] with all prior NOAC AF PCI trials.”